The Germans fighting wind farms close to their homes | Germany | News and in-depth reporting from Berlin and beyond | DW | 26.11.2019

Wind power is Germany's most important source of clean energy. But wind turbines have become contentious here, as more and more people protest against them being built near where they live. 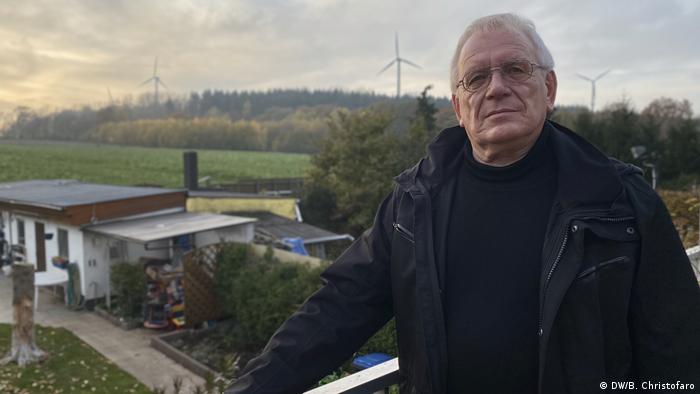 When Rudi Frischmuth stands on his balcony, he overlooks a vast field, a forest shimmering in fall colors — and three wind turbines peeking behind a row of pine trees.

It all started with the noise. The turbines in the small municipality of Langerwehe in western Germany are barely perceptible if they spin slowly. But when strong winds push the rotors at full speed to generate electricity, they make a continuous whooshing sound like faraway planes flying by.

"It drives you insane at night. We had to move my grandchildren into different bedrooms," Frischmuth said.

He and his neighbors demanded the operators shut down their turbines from 10 p.m. until 6 a.m. He also joined a 500-strong protest group that stopped the wind farm from being replaced by taller, more modern turbines.

Still, the 69-year-old feels the wind farm is keeping him from enjoying his retirement in peace. Depending on where the sun is positioned, the shade of one of the rotating turbines falls on his house. He says it is very unsettling.

Not in my backyard

Germany's tug-of-war between convcentional and renewable energy is apparent in Langerwehe: The smoke of a power plant that uses brown coal rises behind the climate friendly wind turbines. 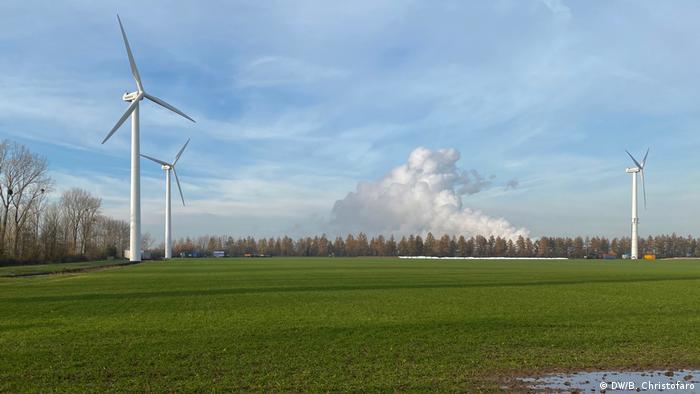 But the plant will be shut down in 2030, at the latest, as part of the country's plan to ensure that 65% of its electricity supply is green by then. Last year, it hit the 37.8% mark, according to the environment ministry.

Wind is Germany's most important source of clean energy because there is a lot of it and it is cheaper than its alternatives. Yet, many people like Frischmuth do not understand why this transition, the Energiewende, must take place in their backyards.

Protest groups across Germany — estimates range from 500 to more than 1,000 — campaign against erecting new wind farms close to residences. They complain about the noise, shade, dangers the rotors pose to bats and birds, and some claim the turbines have caused them health issues.

To get more popular support for wind power, Economy Minister Peter Altmaier drafted a law this month that would require new turbines to be built at least 1,000 meters from a residential area, defined as being made up of at least five houses.

While action groups lauded the suggestions, many politicians and scientists slammed it.

Svenja Schulze, the environment minister, said the law would keep Germany from reaching its energy transition goals. Environment ministers on a state level also joined together to criticize the "wrong signal" Altmaier was sending with his proposal.

Enforcing a minimum distance of 1,000 meters across Germany could reduce the already limited space that can be used for wind farms by 20% to 50%, according to a study by the environment ministry. It would also significantly reduce the amount of old turbines eligible for a revamp.

"We have no chance of becoming climate neutral if we enforce this," said Volker Quaschning, a professor of regenerative energy systems at the University of Applied Sciences in Berlin.

"If you prevent a wind turbine from being built, you have to offer an alternative. That's not happening at the moment."

The cost of fighting wind farms

Quaschning suggests that instead of paring back the construction of new turbines, the government should offer financial incentives to residents close to wind parks.

That could include money being invested into the local municipality, as is already being done in some towns. It could also happen in the form of subsidized electricity bills for these people.

Frischmuth says he does not want money; he wants the same rights as someone living in a metropolis like Berlin, which is mostly deemed too densely populated for wind farms.

"The big cities are the ones telling us to deal with the wind turbines, but they don't want any themselves," he said. "It can't be that one part of the population keeps getting disadvantaged."

For Quaschning, it is important to understand that all Germans, whether they live in a big or a small city, will pay a much higher cost if they fail to take the Energiewende seriously.

"In the second half of this century, we will have completely different worries than fighting over wind turbines," he said. "We will be fighting the consequences of climate change."

The renewable-energy paradise running on diesel 09.09.2022

The Spanish holiday island of La Palma relies primarily on dirty energy, generated by a diesel power plant. The island has plenty of sun and wind. Energy operators are beginning to rethink slowly.