Sources close to Interior Minister Horst Seehofer have told a respected German newspaper that he plans to resign. Seehofer's spokesperson has denied the reports. 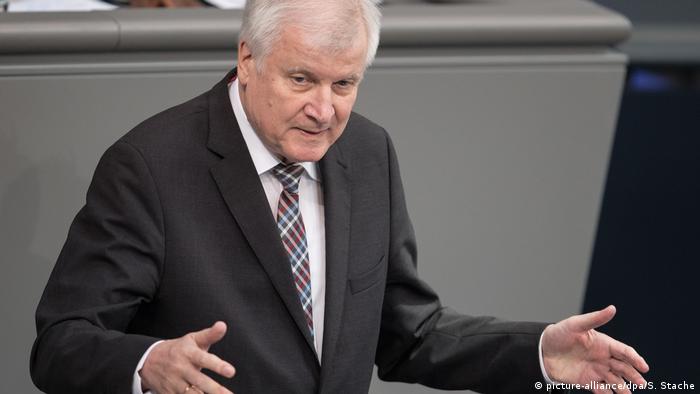 Horst Seehofer, the leader of Chancellor Angela Merkel's Bavarian sister party, will resign from his role in the next few days, according to a German media report.

Sources told Die Zeit newspaper that Seehofer's decision to leave the helm of the Christian Social Union (CSU) has been influenced by Merkel's planned resignation from the leadership of her own party, the Christian Democratic Union (CDU).

Seehofer's tenure as CSU leader: Seehofer has been at the helm of the party since 2008. The CSU is closely with Merkel's CDU, and is part of the German government coalition. Despite the alliance, Seehofer has been a stark critic of Merkel, in particular of her migration policy.

Increasingly under pressure: The past few months have put Seehofer under increased scrutiny. On the one hand, the CSU performed poorly in last month's state election in Bavaria; on the other, there have been increasing disputes with the party's government coalition partners, the CDU and the Social Democrats. Two big topics of contention: migration policy and Seehofer's support of disgraced former intelligence chief Georg Maassen.

Who could be his successor? The state premier of Bavaria, Markus Söder, is likely to succeed Seehofer as head of the CSU — if his resignation were confirmed. Söder has been one of Seehofer's strongest rivals. Just over a year ago, Seehofer had stepped down as state premier to make room for Söder after the CSU performed poorly in Germany's federal elections.

Merkel's twin resignation: Seehofer's reported resignation comes less than two weeks after Merkel announced that she would be stepping down from the helm of the CDU. She said she would remain chancellor until the end of her term in 2021.

CSU's Horst Seehofer hints at willingness to step down

All eyes have been on German Interior Minister Horst Seehofer and his CSU's poor showing in Bavaria's state election. Seehofer has now signaled his willingness to step down, but not for the reasons many would think. (21.10.2018)

Both Angela Merkel's CDU and her center-left coalition partner, the SPD, are holding crisis meetings as they try to chart a new course. Urgent voices on each side could drag the parties away from the political center. (04.11.2018)

Friedrich Merz, a ghost from the chancellor's past, appeared in Berlin to explain why he should succeed Angela Merkel as the leader of the Christian Democrats. The lobbyist's intervention has taken many by surprise. (31.10.2018)