Mercedes-Benz's seemingly innocuous Instagram post prompted outrage in China and the German carmaker has since apologized. Mercedes is one of a number of brands to upset Beijing with its online marketing. 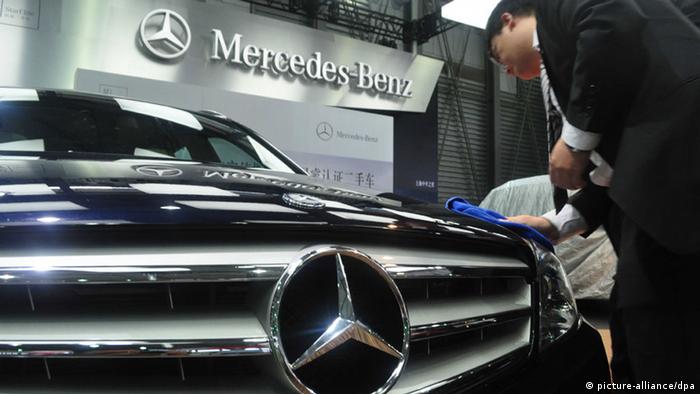 German automaker Mercedes-Benz apologized on Tuesday for "hurting the feelings" of the Chinese people after it posted a quote by Tibetan spiritual leader the Dalai Lama on its Instagram page.

The Dalai Lama quote — "Look at situations from all angles, and you will become more open" — appeared in an ad posted on Mercedes' Instagram account on Monday. "Start your week with a fresh perspective on life from the Dalai Lama," the automaker wrote in the tagline.

The post immediately drew the ire from thousands of Chinese internet users before being deleted by the carmaker's branding team.

Although Instagram is blocked in China, users with access to a VPN, or virtual private network, were able to see the post and copy it across the country's own social media sites.

Beijing authorities have labeled the Dalai Lama as a "wolf in monk's clothes" that is pushing for Tibetan separatism though supposed "spiritual terrorism." 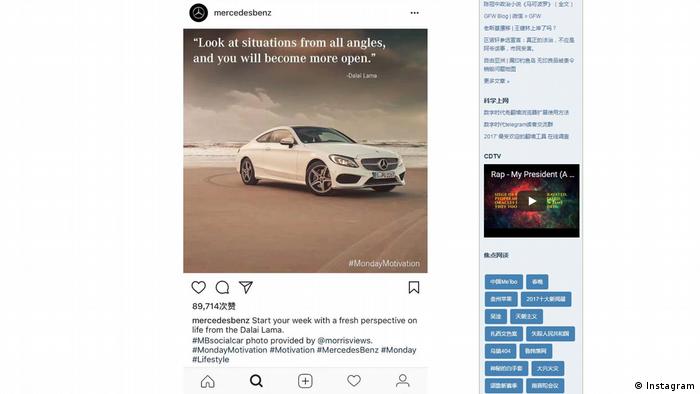 "Even though we deleted the related information as soon as possible, we know this has hurt the feelings of people of this country," it said. The post "published extremely incorrect information, for this we are sincerely sorry", Mercedes added, without mentioning the Dalai Lama.

Mercedes tries to limit fallout, China refuses to let up

Mercedes' social media gaffe is one of several recent instances where a foreign company backpedaled over advertising or information that clashed with the Chinese government's official position.

Mercedes-Benz's position as the top-selling premium carmaker in the world exists thanks in no small part to its booming success in China. The German company sold almost 600,000 vehicles in China alone last year, amounting to a quarter of its worldwide sales.

Eager to limit the fallout from the social media post, the company vowed to "take concrete action to deepen our understanding, including colleagues abroad, of Chinese culture and values."

However, even after Mercedes deleted the post, China's government mouthpiece, People's Daily, published an editorial attack on the German carmaker entitled "Mercedes-Benz, you've made yourself an enemy of the Chinese people!"

The editorial continued: "Some foreign companies are dredging up gold in China's market at the same time as they are harming the Chinese people, what do they want to do?"

Last month, Delta Air Lines and Spanish apparel maker Zara were called out by Chinese authorities for listing Taiwan and Tibet as countries on their websites. China claims sovereignty over both areas.

The Marriott hotel chain even had its Chinese website and app blocked for a week on the mainland after a similar uproar. Following the incident, a Marriot executive was reported by Chinese media as saying that an employee would be fired for "liking" a post on Twitter that mentioned Tibet, even if they didn't work in China.

British rock band Placebo also provoked a backlash from Chinese authorities last year after a photo of the Dalai Lama appeared on its Instagram. The band's was subsequently removed from the lineup at a Shanghai festival. Placebo later said it has been issued "with a lifetime ban by the Ministry of Culture in China."