Beijing has lashed out at the European Parliament for hosting the Tibetan spiritual leader, describing the move as "mistaken actions." The Dalai Lama called on Europe to toughen its stance on China during his visit. 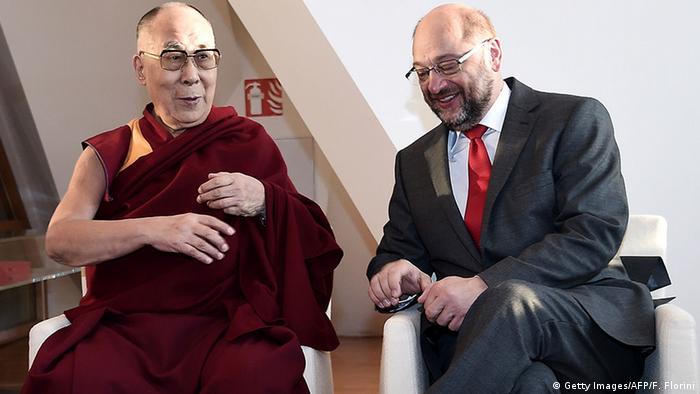 China's foreign ministry on Monday voiced stern criticism against the European Parliament for receiving the Tibetan spiritual leader the Dalai Lama in Strasbourg last week, threatening countermeasures in retaliation for "adhering to the wrong position."

"China is resolutely opposed to the mistaken actions of the European Parliament," said foreign ministry spokesman Lu Kang during a press briefing. "China absolutely cannot remain indifferent, and we will make the correct choice in accordance with our judgment of the situation."

While the foreign ministry official did not elaborate on the retaliatory measures, he said European leaders, including European Parliament President Martin Schulz, ignored China's "strong opposition."

"This time the leaders of the European Parliament insist obstinately on having their own way and adhering to the wrong position, undermining China's core interests and also seriously damaging the political basis for bilateral parliamentary exchanges," Lu added.

The Tibetan leader has appealed for future generations to show more compassion. He also urged the EU to pressure China on Tibet.

'A kind of dilemma'

The Dalai Lama visited Strasbourg last Thursday, where he met with Schulz at the European Parliament and spoke at the Council of Europe, the bloc's chief human rights organization.

The Tibetan monk called on the EU to provide China with "constructive criticism" concerning the issue of independence in his homeland, "at a time when Chinese leaders, even hard-line partisans, are facing a kind of dilemma over how to deal with this problem."

After meeting the Dalai Lama, Schulz said he was deeply thankful for the "frank, open, spiritually enriching and wide-ranging discussion" with the spiritual leader.

"We discussed at length about global affairs and the human rights situation in the world. I deeply thank the Dalai Lama for this," he said.

China's Communist forces "peacefully liberated" Tibet in 1950. The Dalai Lama fled to India after a failed uprising in 1959, although he is still widely revered by Tibetans in China.