Meet the German movement to transform agriculture | Environment | All topics from climate change to conservation | DW | 27.01.2017

An estimated 18,000 people recently took to the streets in Berlin to show support for small-scale farmers and wholesome food. Why are food politics so big in Germany? 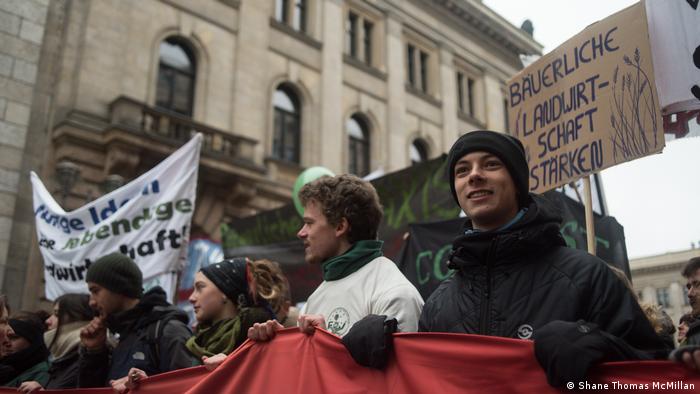 Ottmar Ilchmann is a 54-year-old dairy farmer from Germany's East Frisia region. He has just 60 cows, and says it's becoming harder and harder for small farms like his to survive.

"I see how many of my neighbors have to close their farms, and how much other farmers are taking the land from these little farms."

By other farmers, Ilchmann means the big industrial agriculture operations that are swallowing up more and more of the German countryside.

"They are growing and growing," Ilchmann told DW.

His neighbors aren't alone in shutting down their operations. According to the Alternative Farmers Association, nearly 4,000 dairy farmers went out of business last year.

And organizers of a recent protest in Berlin against the industrialization of agriculture say almost 100,000 small producers have been forced to close in the last decade.

Much of the problem, you'll hear farmers and experts explain, lies with discount pricing. The drive for cheap food means many producers can no longer sustain themselves. Farmers Arlette Seiler-Fuller and Luna Piyczyk protest in Berlin. The young couple say theirs is the greatest job in the world

The "We are fed up!" demonstration has been happening annually since 2011. On January 21, 2017, around 18,000 people marched through the streets of the German capital to show their support for small farmers and wholesome food, chanting "A future on the land!"

"People are looking for other possibilities to make good farming which is good for the environment good for the animals and good for the people," said Ilchmann, who drove his tractor all the way from northwest Germany to take part.

He wasn't alone. In all, 130 tractors made the journey, according to the one of the event's organizers, Iris Kiefer. One traveled almost 600 kilometers (373 miles).

Arriving at the demonstration, these producers joined concerned consumers, along with organizations from slow food advocates to international development nonprofits.

Taken together, they are people who value the work of small farmers', and share their ideals.

Like Stephanie Roth, who campaigns against the Comprehensive Economic and Trade Agreement (CETA) between Europe and Canada, which will be up for a vote in the European Parliament in February.

"We think it is really important to send personal messages to our elected deputies to tell them that we don't want this free trade agreement," Roth told DW. 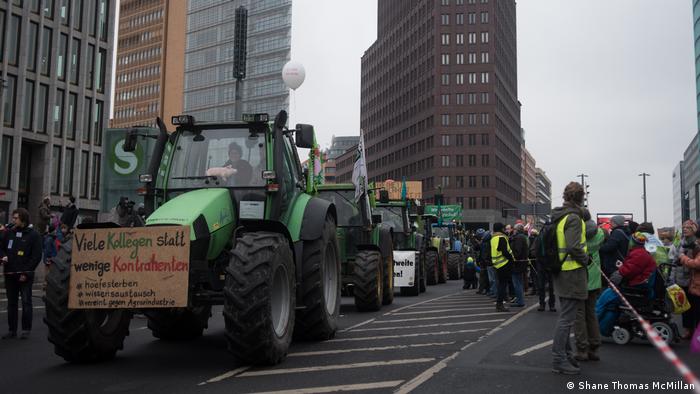 Tractors pull away from Berlin's Potsdamer Platz on as a part of the "We are fed up!" rally

Roth argues that if Europe opens its market to foodstuffs produced more cheaply in North America, still more German farmers will be put out of business.

The agreement would also allow genetically modified food into Europe. Recent studies indicate as many as 80 percent of Germans oppose this.

"There is a German saying that is very well known, every child knows it, it says: 'Du bist was du isst' - you are what you eat.  And I think it is true," says Roth.

Many in Europe see agreements that would harmonize conditions between Europe and North America as a threat.

Karen Hansen-Kuhn works for the Institute for Agriculture and Trade Policy in the US. She says although small farmers are generally better off in Europe than they are in North America, things could shift.

"What I hear from a lot of our EU partners is that we shouldn't underestimate all of the pressure that is being put on EU policy makers to change," she told DW. 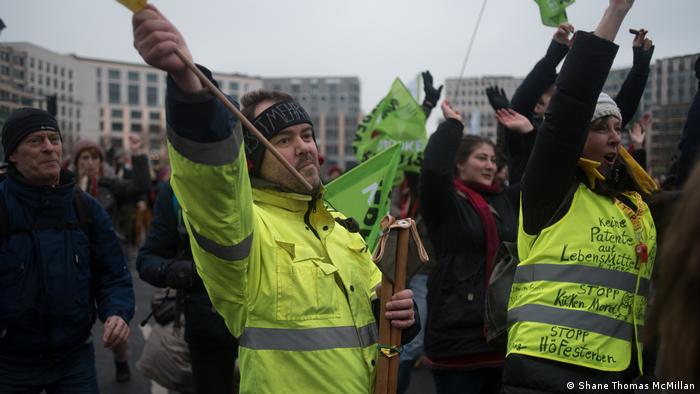 The risk is that if Europe were to step into line with countries like the United States, laws and subsidies could see small producers priced out of the market.

But Hansen-Kuhn believes activists are making a difference. Food and farming have become an important public concern, and European lawmakers are having to listen to voters.

"You wouldn't find the same thing in the US if you talked to a policymaker that they would be able to tick off, consistently, the same four sets of demands that they are hearing from local populations," she says.

Part of that activism is about getting people out of the streets, as happened in Berlin last weekend. But Kiefer says the size of the crowd is less important than the dialogue between farmers, civil society and consumers.

"I think only if we go together, hand in hand, consumer and farmer, we can change our system of food production."