Some analysts have dubbed her the "new Benazir Bhutto" for confronting the Pakistani military. But Maryam Nawaz, daughter of the deposed PM Sharif, says she wants to carve her own niche. Will she live up to her image? 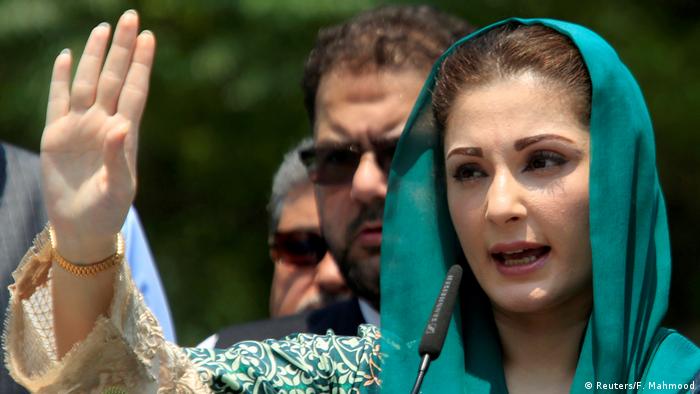 Recently, when reporters in the UK asked her if she was the "new Benazir Bhutto" in Pakistani politics, Maryam Nawaz, daughter of the deposed Pakistani premier Nawaz Sharif, said although she admired the late politician, she wanted to create her own place.

While Bhutto was a known figure in the West, mainly because of her struggle against the military dictatorship in her country, Maryam cannot boast of being an international celebrity. But some analysts say that her challenge to Pakistan's powerful military generals is as potent as Bhutto's. 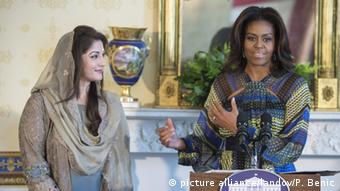 Maryam, who is currently in London, was sentenced to seven years in prison on corruption charges by an accountability court in Islamabad. Her father, Sharif, was given 10 years. Sharif's supporters say the Panama Papers-linked corruption charges against the former premier and his family are politically motivated — a calculated attempt by the army and the judiciary to keep the Sharifs out of power and to strangle their popular vote bank in the most populated Punjab province.

Sharif, who remained close to the military generals until the 1999 coup against his government by General Pervez Musharraf, has since followed a collision course with the army. And Maryam has been at the forefront of her father's "anti-establishment politics" for some years.

After the July 6 court verdict against Sharif and Maryam, many analysts said the father-daughter duo would stay back in the UK to avoid incarceration. But a defiant Maryam told reporters in London that she and her father would fly back to Pakistan on July 13.

The announcement was unexpected but would definitely increase chances for Sharif's Pakistan Muslim League Nawaz (PML-N) party to secure a victory in the July 25 parliamentary elections.

While Shahbaz Sharif, Nawaz Sharif's brother and former chief minister of Punjab province, prefers good ties with the military, Maryam has insisted on no compromise on the civilian authority in Pakistan.

The military has directly ruled Pakistan for more than thirty years and analysts say it continues to call the shots in the country. While in power, Sharif tried to assert his authority over the army and take foreign and domestic policy matters into his hands, but unsuccessfully. He also wanted to foster better ties with India , with whom Pakistan has fought wars.

A change in Sharif's political stance has not gone down well with many PML-N officials, who criticized Maryam for pushing her father on a collision course with the military. Some political commentators say that her politics have proven to be suicidal for the PML-N.

But Raja Zafar-ul-Haq, a senior PML-N official, defends Maryam and her political line. "I think that people consider her a courageous woman who is standing by her father in very difficult times," Haq told DW.

Maryam faces an imminent imprisonment upon her return to Pakistan. It can go either way: the party can split; it can also reinvigorate the PML-N's election campaign and fetch the Sharifs "sympathy votes."

Ahsan Raza, a Lahore-based journalist, believes a possible incarceration will consolidate Maryam's position within the party and launch her as a charismatic leader, a true heir to her father.

"Her imprisonment may damage her party for the time being because other members of the family are not promoting her anti-establishment narrative," Raza told DW.

"But her planned return to Pakistan on Friday could add to her popularity," he added.

Mushahid Ullah Khan, a Sharif aide, says Maryam is already the most important PML-N figure after her father. "Her imprisonment won't frighten us. Maryam has challenged the most powerful elements in Pakistan's power corridors and has become a symbol of resistance. A mammoth gathering will await her in Lahore upon her return," Khan told DW.

Despite being a conservative country, women politicians in Pakistan have always played a key role in galvanizing the public.

Fatima Jinnah confronted the dictatorial regime of General Ayub Khan in the 1960s, contesting presidential elections. Khan declared her an "Indian agent" and launched a massive campaign to discredit her, eventually defeating her in the controversial vote.

In the 1980s, Benazir Bhutto returned from exile to mobilize people against General Zia-ul-Haq, a military dictator who had hanged her father Zulfikar Ali Bhutto in 1979, unleashing a countrywide Islamist drive and arming Afghan mujahideen to fight against the Soviet forces.

Benazir's mother, Nusrat Bhutto, was also at the forefront of the pro-democracy movement during the 1980s.

Maryam, therefore, is not the first female politician in the South Asian country who has stood out in the male-dominated political arena.

She is, however, a controversial figure in the country. Supporters of Imran Khan, an opposition politician and former cricket star, hold her equally responsible as her father in amassing great wealth through corruption and abuse of power. The July 6 court ruling is proof of this, they say.

Critics also downplay her political role by calling her an "aristocrat."

"Women from lower and middle classes must come to parliament. Only they can work for the plight of the common people, including women. Both Benazir and Maryam belong to influential political dynasties and do not represent change," Saman Jaffri, a former female parliamentarian, told DW.