A court in Pakistan has handed a jail term to former PM Nawaz Sharif in a Panama Papers corruption case. Some analysts say the verdict will give Pakistan's powerful military more behind-the-scenes influence on politics. 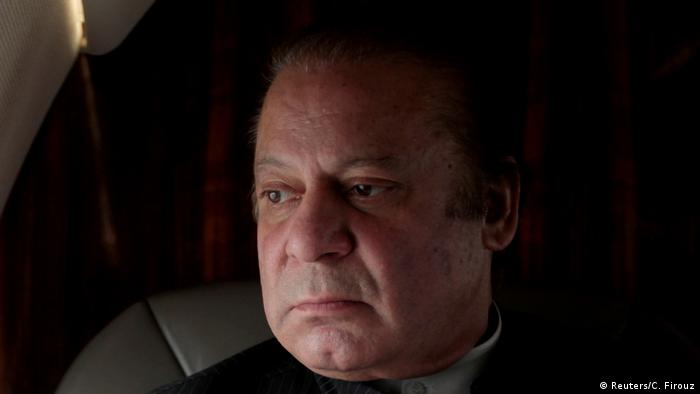 In a highly anticipated verdict in the Panama Papers case, an accountability court in Islamabad found ex-Prime Minister Nawaz Sharif and his family guilty of corruption and sentenced the former PM to ten years in prison. Sharif's daughter, Maryam Nawaz, was given a seven-year jail term.

The Avenfield case, which pertains to the purchase of four flats in London, was filed against Sharif and his family by the National Accountability Bureau (NAB).

Earlier on Friday, the accountability court rejected Sharif's plea to postpone the ruling for a week.

Sharif is currently in London to attend to his ailing wife. It is unclear whether Sharif would return to Pakistan.

In April, Pakistan's Supreme Court ruled that the former prime minister cannot participate in politics for the rest of his life.

The top court had removed Sharif from office on corruption charges in July last year.

In April 2016, Sharif found himself in a precarious position following the "revelations" made by the famed Panama Papers. Leaked documents showed that three of Sharif's children had links with offshore companies that owned properties in London. Sharif denies any wrongdoing.

Subsequently, a petition against Sharif was filed in the country's Supreme Court, which initially ruled against Sharif's disqualification as prime minister but formed a Joint Investigation Team (JIT) to further probe allegations.

The JIT pointed out failure on the part of the Sharif family to produce the required documents that would confirm their "known sources of income," underlining that the prime minister's family was not able to reconcile their assets with their means of income.

Consequently, the six-member JIT recommended that the case be forwarded to NAB, which deals with corruption cases.

Sharif was swept into power in 2013 after comfortably winning the general election.

Three-time PM Sharif never completed a term as prime minister, having been removed during his second term by a military coup by General Pervez Musharraf in 1999.

Pakistan: Will general elections be held on time?

Some analysts say the court verdict against Sharif, who remains popular among the Pakistani electorate, will give the military more behind-the-scenes influence. The powerful military has ruled the South Asian country for nearly half of its history.

Some analysts say that Sharif is being "victimized" by the country's powerful military establishment, which is allegedly backing the opposition parties. The army leadership is very skeptical of Sharif due to his repeated attempts to improve ties with India and enhance trade between the two South Asian nuclear-armed archrivals. Also, a strong civilian government has always been a threat to the military's unchecked power, they say.

Despite a number of court rulings against the PML-N, a recent series of by-election wins shows that it remains a force to be reckoned with.

'Sharif not ready to bow down'

Shahbaz Sharif, who is leading the PML-N party's campaign ahead of the July 25 elections, said Friday the court's decision against his brother is "unjust."

"We reject this decision," Shahbaz told a televised press conference in Lahore shortly after the ruling, adding that the "people will give the real verdict in July 25 elections."

"It is based on injustices. This decision will be written in black words in history," he added.

Mir Hasil Bizenjo, former shipping minister and Sharif's close aide, told DW that the former premier is not ready to bow down to the military.

"We knew that they would punish Sharif for asserting his democratic rights and civilian authority. But Sharif has decided to confront the military establishment for the sake of democracy and Pakistan's future," Bizenjo, a politician from Baluchistan province, said.

Tauseef Ahmed Khan, a political analyst, says the court's decision is political in nature and that it "proves that politicians are selectively targeted."

"No [corrupt] military general has ever been sentenced in Pakistan," Khan told DW.

But Arif Alvi of Imran Khan's PTI party said that the Friday verdict is "a warning to all those who engage in corrupt practices.

PTI leader Khan hailed the verdict as an endorsement of his years-long campaign against corruption in Pakistan.

Will Sharif return to Pakistan?

The big question now is whether the ex-premier would head back to his country and face the new political situation for him and his party.

Surveys show Sharif's PML-N leading the opinion polls and could claim victory in at least the most-populated Punjab province, which has been a Sharif stronghold since the 1980s. Pakistan's army generals also derive most of their power form Punjab, and it is the first time in the Islamic country's history that a popular politician from the province has challenged the military and its security agency, the Inter-Services Intelligence (ISI), so openly.

"Sharif will come back and fight both legal and political battles. We will take part in the upcoming poll and we are confident that people will vote for us," Tariq Fazl Choudhary, a former PML-N parliamentarian, told DW.

If Sharif chooses to stay in the UK, experts believe it would hurt his party's chances in securing a victory in July 25 polls.

Khursheed Shah, former opposition leader in the National Assembly (lower house of parliament), told media the verdict against Sharif so close to the elections "will benefit Sharif."

Keeping in mind the volatile nature of Pakistani politics and the surge in Islamist extremism in the country, a possible outbreak of violence could lead to the postponement of the elections.

The US, which is critical of Islamabad's "lack of cooperation" in reining in Islamists active in Afghanistan and Pakistan, is keeping a close eye on the political turmoil in the South Asian country, Anwar Iqbal, DW's correspondent in Washington, said.

Last week, the Financial Action Task Force (FATF), an inter-governmental body, placed Pakistan on its "gray list" as part of a week-long meeting in Paris.

The US-backed move means that Pakistan's financial system has been designated as posing a risk to the international financial system because of "strategic deficiencies" in its ability to prevent terror financing and money laundering.

Soon after the FATF announcement, Pakistan, which has a caretaker government in place ahead of the July 25 parliamentary elections, removed Muhammad Ahmed Ludhianvi, a radical Sunni group leader, from a domestic terror watchlist. The country's election commission will now consider whether Ludhianvi of Ahle-e-Sunnat Wal Jamaat (ASWJ) can contest the July polls.

Pakistan could be "blacklisted" in September, and much depends on the next government on how to address the international community's concerns over terrorism issue.

But at the moment, Pakistan is facing a bigger domestic turmoil.

As the Trump administration has halted most of Pakistan's military aid, analysts say a domestic challenge to the Pakistani army by Sharif could escalate the battle for civilian supremacy in the country.