The leaders of Germany's two biggest parties went head to head on TV for the only time ahead of the September 24 vote. Merkel and Schulz sparred on topics ranging from migration to foreign policy.

- The polls are heavily in Merkel's favor as she campaigns for a fourth term, with the CDU at 37 percent and the SPD at only 23 percent.

- Although there are five parties in the Bundestag, only the candidates of the two largest parties, likely to be chancellor, were invited to take part in the 'duel' as it is known.

Here is how the exchange developed over 85 minutes on Sunday night:

21:43 Schulz says we must take "all preventative actions" possible "under the rule of law" to find those plotting terrorist attacks in Germany, including increased surveillance and more police officers on the streets.

Merkel agrees, saying that a "person like [Berlin Christmas market attacker Anis] Amri should long have been in detention."

21:37 Moderators move into the final yes-or-no round of questioning.

First up: "Should marriage only be between a man and a woman Mr. Schulz?"

Next: "Chancellor Merkel, do you support Qatar hosting the World Cup?" 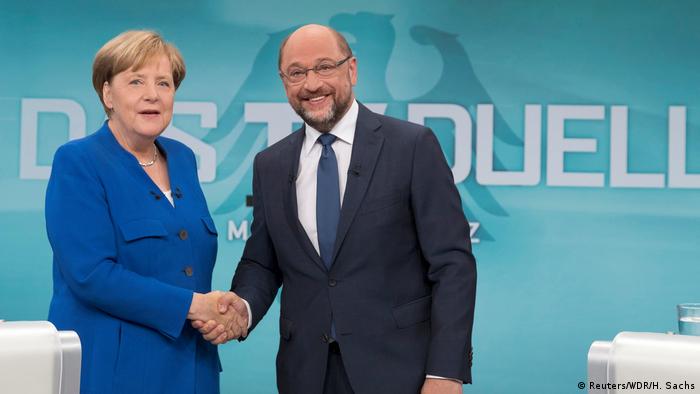 21:30 Schulz accuses Merkel of "protecting automotive executives" who should be punished over Dieselgate.

Merkel says she is "not turning a blind eye...I am very angry. They are a pillar of our economy, and they are endangering hundreds of thousands of jobs, and people. People who did not make any mistakes," by tarnishing the "Made in Germany" label.

21:24 "Why are you not making sure the car companies compensate citizens," for vehicles affected by the Dieselgate emissions software scandal, a moderator asks Chancellor Angela Merkel.

"We are trying to ensure compensation is provided, where legally possible," Merkel responds. Saying that the car industry had perpetrated a "breach of trust...but there are 80,000 people in the industry who didn't make a mistake, and they shouldn't be punished too."

She adds that the most important point is to "make sure vehicles comply with environmental legislation."

Schulz fires back that "German law can't compensate those in the US with German cars" that were affected by the Dieselgate scandal, and says the current government has protected automotive executives who should be punished.

21:15 "Germany is a prosperous country, but that doesn't mean everyone in Germany is prosperous," Schulz critiques Merkel's statement that there is a job surplus in the country.

"Some couples with two incomes can't even afford rent, as rents keep climbing."

Merkel then rejects criticism that she "doesn't represent" poor Germans who "haven't benefitted from the country's growth," by highlighting how unemployment has dropped under her leadership.

"Do you believe American President Trump is the right person to solve this problem?" a moderator asks Schulz. "No," is Schulz's clear response. "Any man who uses Twitter to slam his opponents left and right and can't differentiate himself from neo-Nazis...the German chancellor has to stand up to."

Speaking about Trump, Merkel says that she "made it clear that cooperation" was based on shared values, and that she would not blindly follow the US into armed conflict. "This must be resolved peacefully," she adds.

"Naturally we have major differences with the US president," Merkel continues, referencing neo-Nazi marches in Charlottesville, but that she will "work to convince the US president that a diplomatic solution is the best tactic to take with North Korea."

21:01 "I don't see Turkey entering the European Union, I never did, it was different for the SPD however," says Merkel.

"If I become German chancellor, I will stop accession talks with Turkey," Schulz responds, criticizing how "an autocratic ruler," is "arbitrarily arresting" people, including German citizens.

As to family reunification for refugees, Schulz said he would "decide on a case by case basis." Merkel, however, avoids answering the question, saying that the new government "would have to decide on this next year," to make sure the Geneva Convention is followed.

20:51 Schulz calls for a "cooperative European immigration law," to avoid disagreements with countries "like Hungary and Poland, who think Germany and Italy should deal with it on their own...Europe is a project of solidarity."

20:48 "People who don't have the right to be in our country should leave it - people have already been deported," says Merkel, defending her open-door immigration policy.

20:43 In a bid to point out his differences from the chancellor, Martin Schulz says that the government needs to accept that some constitutional reforms are necessary. "Redefining marriage as no longer just between a man and woman has not harmed Germany," Schulz said. He also promised to do more to stand up to creeping authoritarianism in Turkey.

20:35 Both Merkel and Schulz see no issue with Muslim immigration to Germany. Chancellor Merkel says that "although radical Islamists are perpetrating acts of terror in Europe," she still believes that "Islam belongs in Germany," considering the large amount of observant Muslims who have been well integrated into German society.

Martin Schulz agreed that "integration of Muslim immigrants presents no greater challenge," in comparison to any other group, but that the government could do more to "stop hate preachers" spreading radical ideology.

20:30 Responding to criticism that Merkel "put democracy in the sleeper cabin," when she suddenly decided, without discussing with other leaders in the European Union and within Germany, to open Germany's borders to refugees.

"I had zero hope that Viktor Orban would change his position," said Merkel, adding that SPD Vice Chancellor Sigmar Gabriel was part of her decision-making process. Schulz made clear that he agreed with the decision to welcome refugees, but had a problem with how Merkel makes decisions without consulting the rest of the government.

20:20 The theme moves on to immigration. Chancellor Merkel says that migrants are "no threat to Germany," but that the 2015 refugee crisis has left Germany with a "difficult task" of integrating new arrivals into society, making sure they find places in educational institutions and the labor market, but adds that Germany needs to help fight the causes of such crises, like the violence in Syria.

20:15 And we're off! The first question goes to Martin Schulz - why did his polls numbers jump so high when he was nominated in January, only to continue to sink far below Merkel's in the ensuing months? Is it because he has little experience in German politics after spending so much time at the European parliament?

Schulz responds that the "loss at state elections," during those months, for example the most populous state of North-Rhine Westphalia, hurt his party's support.

The first question to Chancellor Merkel is about the perceived "many Merkels" as she moved her party from the right to the center over the years. "New challenges require new approaches," the chancellor answers.

19:56 With just minutes to go until the debate begins, the SPD has already become the butt of jokes on social media after they were discovered to be running ads on Google "Merkel loses, clearly, against Schulz."

19:40 15 million viewers are expected to tune in for the debate at 20:15. The four moderators are, from left to right: Claus Strunz of Sat. 1, Sandra Maischberger of ARD, Maybrit Illner of ZDF and Peter Kloeppel of RTL. 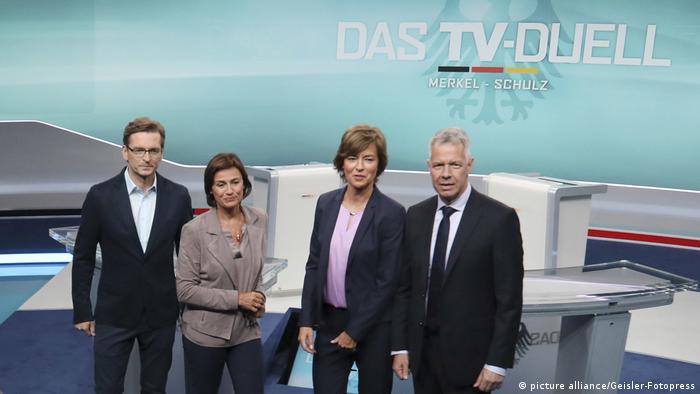 19:20 The stage has been set for the face-off between Merkel and Schulz. On Friday, Merkel downplayed criticism of the format - the four moderators have little room to deviate from pre-selected questions and there is no public audience.

Earlier in the day, Germany's Green Party joked that the "grand coalition is dueling itself" - referring to how the SPD and CDU have been ruling together since 2013, and the fact that other parties are not allowed into the debate. 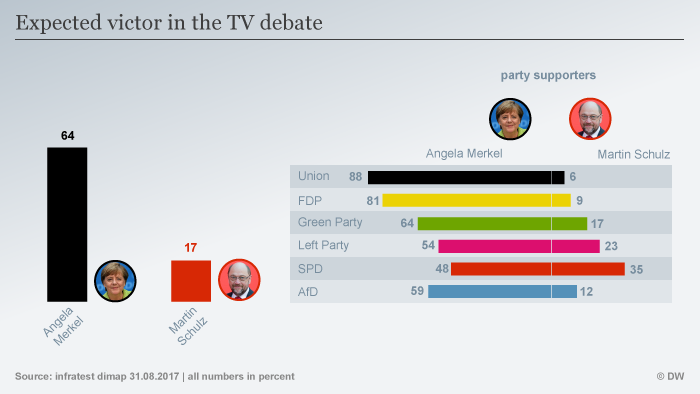 Germany’s CDU and SPD candidates for chancellor are set for the key debate broadcast on all four main TV stations with more than 15 million expected to watch. Merkel is tipped to come out ahead of Schulz. (02.09.2017)