Hundreds of live turtles and tortoises have been found in suitcases at Manila airport's baggage claim in the Philippines. The intercepted reptiles included a number of endangered species and were worth around €76,700. 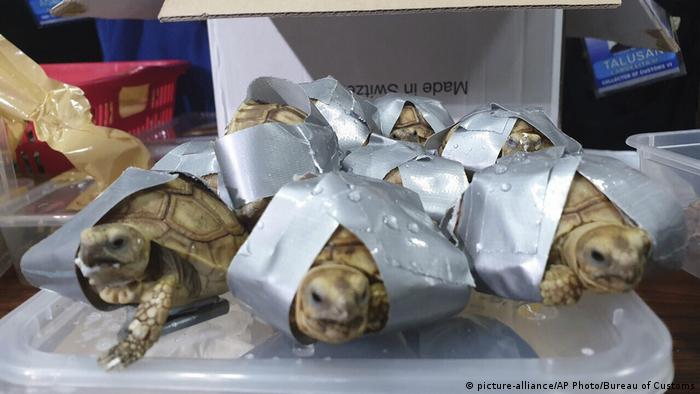 The 1,529 reptiles were found hidden among clothes and shoes in four suitcases that are believed to have been abandoned in the arrivals section by a passenger who arrived from Hong Kong.

Read more: Cracking the bad eggs of the turtle trade

The species included several star tortoises, red-footed tortoises, sulcata tortoises, and red-eared sliders, the customs bureau said in a statement on Monday. Some of the animals had their legs restrained with duct tape. 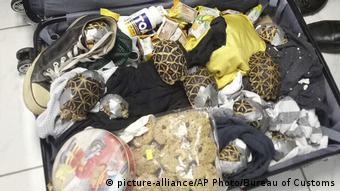 The turtles were found hidden between clothes and shoes

Smuggler on the run

The suspected smuggler disappeared before authorities could confront him or her, officials said.

"The passenger may have been informed of the vigilance of the port against illegal wildlife trade and its penalties, thus leaving the luggage unclaimed in the arrival area," the statement said.

"Our staff were taking care not to hurt them because duct tape was used to immobilize the turtles," he added.

Investigators said they are now working to determine the whereabouts of the passenger who attempted to smuggle the reptiles.

The Philippines is a major source and transit point of wildlife trafficking, according to a 2018 report by the US State Department.

The smuggling and trade of turtles and tortoises in the Philippines is banned under the Wildlife Resources Conservation and Protection Act, but the Philippines authorities have struggled to curb the illegal wildlife trade.

The turtles confiscated on Sunday were likely destined to be sold in the Philippines or smuggled to other countries using false documents, environment officials said.

"It's for business purposes. Those turtles are expensive. It's such a lucrative business. There are buyers and collectors who treat them as pets," environment undersecretary Benny Antiporda remarked.

Antiporda said the Philippines would ask Chinese authorities whether they wanted to take back the confiscated turtles which were being quarantined and treated in Manila.

The reptiles have been handed over to the Department of Environment and Natural Resources Wildlife Traffic Monitoring Unit for safekeeping, the customs bureau statement said.

For the love of turtles

The endangered hawksbill sea turtle lays its eggs in the Dalyan Delta on Turkey's southwest coast. With charm and dedication, June Haimoff of England devotes her efforts to saving the species. (27.06.2016)