A German court has fined a Cologne man for taking four sketches from the artist's recycling bin and trying to sell them at auction. Richter's works are among the most expensive in the world. 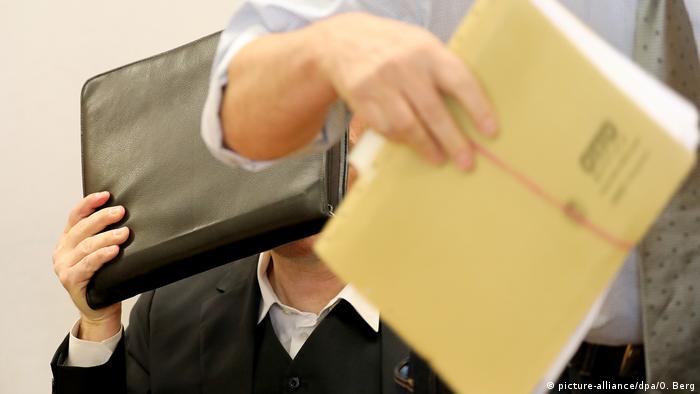 An administrative court in the western German city of Cologne fined an unemployed 49-year-old man €3,150 ($3,529) on Wednesday for stealing four sketches out of the recycling bin in front of artist Gerhard Richter's villa and attempting to sell them at a Munich auction house.

Richter, who regularly tops the list of the world's most expensive living artists, had discarded the four unsigned "overpainted photographs" in 2016, when the defendant took them.

Although the defendant did not address the court other than to say that he did not see himself as "a thief or a criminal," a Cologne police officer said that he had been considerably chattier when he was questioned.

Claimed he was simply doing a good deed

The officer said the man had claimed that the bin had been knocked over in a storm and that he had discovered the works when he decided to do a good deed and clean up paper lying on the street. He claimed he tried to return the works but that he never got a response from the artist.

The man subsequently approached a Munich auction house in an attempt to sell two of the four works. But the auction house refused to take them without a certificate of authenticity from the Gerhard Richter Archive in Dresden.

The archive's director, Dietmar Elger, told the court that when he saw the works it was clear they were originals, but added that Richter would never allow the works to leave his studio unsigned. The defendant told Elger that Richter had given the works to a friend of his.

Elger said that the works would have no value on the art market in that state, yet added he "probably wouldn't have thrown them away." The court said that the works had an estimated value of around €60,000 ($67,000); similar works are available on the market for around €80,000.

Richter, who is 87, did not appear in court as he was recovering from a stay in hospital. Representatives from his studio said the artist found the entire incident "annoying," and was not interested in seeing the man punished, but added he would like to see the works destroyed, "as originally intended."

In announcing her verdict, Judge Katharina Potthoff said, "even if the works were lying next to the recycling bin, they were still the artist's property."

"I find it amazing that I'm turning 80. I hope I still have several years ahead of me, because I haven't done yet what I ultimately want to do," Markus Lüpertz said shortly before his birthday.