It's the influential artist's inaugural exhibition in Australia: A major retrospective of the work of the world's most expensive living painter, Gerhard Richter, opens in Brisbane.

For a man who doesn't like to travel much, there are few places — and markets — Gerhard Richter hasn't yet conquered. So it is somewhat extraordinary that, over six decades into his storied career, the reclusive yet notorious German artist is finally receiving his inaugural retrospective in Australia: a modest but strategically important global art market, on the doorstep of Asia.

"Australia — it's quite amazing, really," the artist told DW, while slowly pacing his home studio in Hahnwald, a few kilometers from Cologne.

More than five years in the making, "Gerhard Richter: The Life Of Images" brings together over 90 Richter works from around the globe, and is the first significant international retrospective of the artist's collective oeuvre since his 2014 showing at the Foundation Beyeler in Basel. It followed the triumph of 2011's "Panorama" retrospective at London's Tate Modern, which would later travel on to Berlin's New National Gallery and the Centre Pompidou in Paris.

Richter made global headlines in 2015 with the sale of the 1986 "Abstraktes Bild" work passing at auction in London for 30.4 million pounds (€34 million, $40 million) — an accolade that seemingly unsettled the artist. 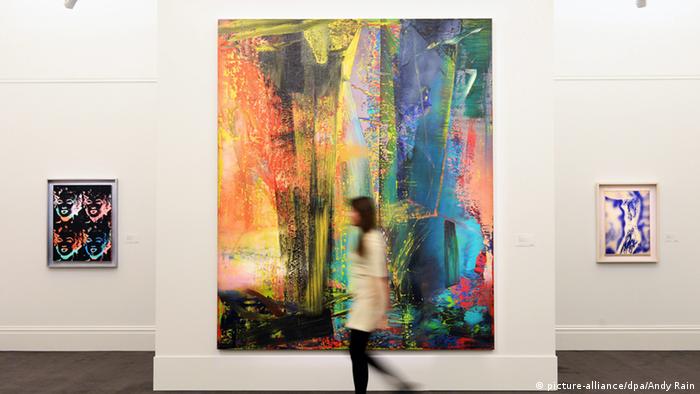 "What does it matter?" he deadpans, gesturing to a number of unfinished abstract works affixed to the wall of his studio, awaiting his final touches. "I have my work, I am not concerned with that. The prices, they are obscene. Nothing is worth that [amount of money]."

Despite his recent notoriety, Richter's story is one that has come to symbolize that of Germany. 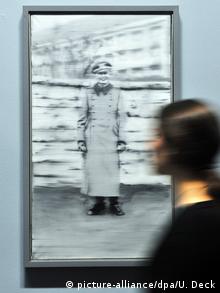 The artist was born in Dresden in 1932, a little more than a decade before the city would be buckled by Allied bombing — heralding the closing days of a catastrophic war that would cost the life of many of Richter's extended family members, including his Uncle Rudi.

The artist would immortalize his uncle in his 1965 painting of the same name, which has traveled from the Lidice Collection in the Czech Republic to feature in the Brisbane exhibition.

Amidst the rubble, Richter would eventually enroll in Dresden's Academy of Fine Arts — a period he recalls as productive, but would eventually prove limiting. "I learned the method and I learned discipline — discipline I still use today — but there was little freedom."

Despite Richter's early successes in East Germany — including a stint painting socialist murals on public buildings, commissioned by Soviet protectors — he longed for the freedom to openly explore the painted image far beyond the confines of socialist realism, which he'd already begun in secret.

This ambition was fast-tracked in 1959 when, travelling to the second edition of the Documenta art show in Kassel, West Germany, the 27-year-old Richter first encountered the frontier-gouging work of Jackson Pollock and Lucio Fontana.

Richter began plotting his escape to the west, and would finally defect in 1961 with his first wife, Marianne Eufinger (known as Ema), only months before the Berlin Wall would cleave East Germany — and its citizens — off from the West.

What would have happened to the artist had he found himself entrapped in the east? He takes a sip of his coffee and ponders: "It couldn't have happened, I was so eager to go… I had to go," he stresses, looking towards the window to consider his alternative fate. "But who could know? Perhaps I could have survived and made a life [in the east]. It could have been possible. But I left all of that long ago." 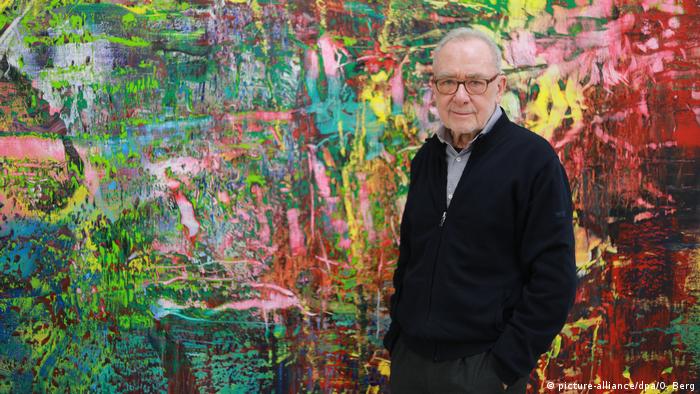 Richter in his studio

Richter enrolled at the State Art Academy of Dusseldorf — a hotbed of experimental new artistic paradigms — and spent the next years honing a pioneering new form of painting that would come to define his early years, which he called "photo painting."

A signature recognizable beyond fluctuations

His then subsequent and sudden leap from figuration into abstraction in the 1970s would catch the art world unawares, but would eventually prove some of his most popular works — and in 2015 propel him into cultural history. 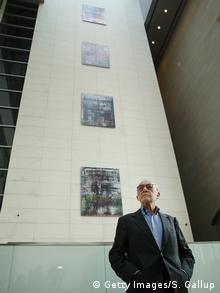 Richter's "Birkenau" series hangs in the German parliament in Berlin

A number of these abstracts are making their way to Australia, including the restless "Birkenau" suite (2014), based on four photographs smuggled out from the Auschwitz-Birkenau concentration camp in Poland, and now installed at Berlin's Reichstag. Richter has also loaned some works from his own private archives, namely his overpainted photographs.

"I have always been unsure with myself and my work, and had many doubts," the artist explains of his severe oscillation between visual paradigms. "I started to experiment very early on, because I wanted to prove to myself what I was capable of."

"Just as a form is finally becoming accepted and popular he'll suddenly abandon it with little warning," the director of the artist's archives in Cologne, Dr Dietmar Elger suggests. "There are few artists who, after 40 or 50 years, create important new artistic statements: He is a real exception. Yet, despite his fluctuations, there is always a central idea to his work. You 'feel' it's Richter. You know it's Richter. There are very few artists like him.

Exploring the core of German identity

With Richter's diverse oeuvre have come innumerable interpretations of his work and aesthetic philosophy. While his early photorealistic work was often aligned with that of Andy Warhol, his landscapes would be compared with the Flemish mode and his abstracts saw analogies with Pollock. And then, of course, there are the grey paintings, tapestries, glasswork and digital strip paintings.

But Elger argues that, despite his broad international appeal, Richter remains the quintessential German artist. "I think it's still relevant, it's still important to understand him in this way," he explains from Richter's studio in Cologne, now the creative home base of Richter's wife and fellow artist Sabine Moritz.

"Just look to the latter years — first the 'October' [Baader Meinhof] cycle and then the 'Birkenau' paintings. These have all been created in recent years, and are important works that relate to German history and our situation, and who we are as a country. These are not abstract ideas – it's all very real, almost too real."

"Gerhard Richter: The Life Of Images" is an ambitious project for Brisbane's Gallery of Modern Art, and its director Chris Saines — and was only realized following exhaustive and costly loan negotiations that saw his team crisscross the globe.

"It's only once, maybe twice, in your career you get to present someone of the caliber and stature of Gerhard Richter," he offers, from his office high above Brisbane's eponymous river. "Working with an artist of his standing is nothing you take for granted. It's an honor to present these works in Australia."

The exhibition opens on October 14 and runs until February 4, 2018, at Brisbane's Gallery Of Modern Art.

'Gerhard Richter: The Life of Images' exhibition: the works on show

From personal portraits to abstract works dealing with the most difficult chapters of Germany's history, Gerhard Richter has often shifted styles, yet the artist's influential signature can always be recognized. (13.10.2017)