Her photos wrote art history - and became part of it as well. Angelika Platen has covered the international art scene from a very personal perspective over 50 years. A Berlin exhibition now features her works.

Acclaimed German photographer Angelika Platen portrayed over 300 contemporary artists, including Marina Abramović, Blinky Palermo, Andy Warhol (top picture), Joseph Beuys, Neo Rauch, Georg Baselitz, Jonathan Meese and Wolfgang Tillmans. She managed an art gallery in Hamburg for some time, and spent many years in France. Platen, who was born in Heidelberg in 1942, now lives and works in  Berlin, where her works are currently on show at the Galerie Michael Schultz.

DW: Famous painters like Georg Baselitz, Neo Rauch and Gerhard Richter have a reputation for being a bit difficult when someone enters their studio - especially when that intruder is a photographer. How was that in your case back then?

Angelika Platen: It was all a lot easier at the time. We were all young, and there weren't as many artists around as nowadays. New contemporary art emerged in the late 1960s. It was a lot easier to make appointments with artists. You simply called them up. I'll never forget the moment when I knocked on Richter's door. A note was attached there saying: "Back soon. I'm just rushing to an extremely important appointment."

And what was so vitally important to him?

He never told me that (laughs). It was really amazing. I just sat down on the floor in front of his door waiting for him. And it was worth it.

How did he react when he came back?

He was a bit embarrassed about being late and therefore granted me more time in his studio. That happened in 1971 in Düsseldorf. I was allowed to take pictures of him, and he also took pictures of me. We took pictures of each other. That was a very beautiful encounter. 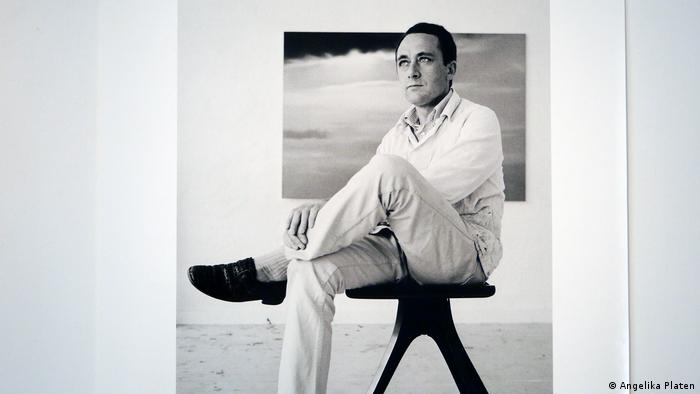 Mirrors tend to come up a lot in your photos of contemporary artists. Quite often, the artist, or the artist and the photographer, are depicted on your photos. Is that a special stylistic device of yours?

I once spontaneously applied that technique when I met Sigmar Polke. There was a mirror hanging on the wall opposite the door at the entrance of the apartment. I immediately picked up my camera to take a picture of both of us reflected in the mirror. It was a very hot summer day. Polke was wearing a shirt imprinted with colorful flowers, whereas I was wearing a short top so that my belly wasn't covered. Together, we took a very fresh look into the mirror, and he loved that.

The 1960s are remembered as hippie era. How did you experience this period of changes as a young and ambitious photographer?

For me, it was a time of emancipation. I will never forget an incident in Hamburg's noble Hotel Atlantic in 1966. I was invited there as a photographer to attend a huge reception. I was wearing a pink pantsuit - and the hotel refused to let me in because I was wearing trousers! It's hard to imagine that nowadays! 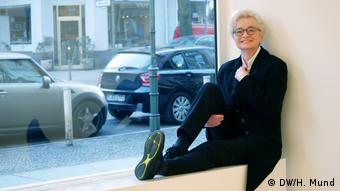 In the ears of contemporary women, that sounds like something that could have happened a century ago. What else did you experience in the artist scene back then?

It was the beginning of my own emancipation. By 1968, I was visiting artist studios, art fairs and exhibitions. In Eindhoven, for example, I shot the first pics of Joseph Beuys. That was a turning point.

It was rather unusual for a woman to feel so free as to simply go to such events and to take photos there. Back then, there weren't that many female photographers out there. They were rather exceptional.

How did an artist like Joseph Beuys - who, after all, had been in the army during WWII - treat you as a young emancipated woman?

I have photographed numerous works of Beuys, for example at one of his exhibitions in Hamburg. He just stood right next to me, still working on his showcases, and simply let me take pictures. Then there was a short break. We went outside, somewhere between the Kunstverein and the Kunsthalle. We were facing a huge sculpture by Rodin called "The Citizens of Calais."

Beuys was quite tired. He was wearing his hat as usual, and he was staring into the sky dressed in a white shirt - and that was a great shot. He was visibly pondering how he should go on with his work. He wasn't smoking, and he was tense. You can almost see how hard he was thinking - right next to the "thinker Rodin" (laughs).

Was Beuys already a star at this stage? Or was he still searching for his artistic position in the early 70s when you photographed him?

He was already a star in that he was heavily represented in the famous Ströher collection [Eds. the entrepreneur and art patron Karl Ströher put together one of the biggest collections of German art after 1945]. But the other artists in the Hamburg exhibition were much bigger stars. Andy Warhol, whose works were also shown there, was much more famous. Beuys only became a bigger star later on. It must have been a big challenge to photograph the rugged face of Beuys that was marked by the war. How did you feel about that?

I observe artists as human beings, trying to imagine how their facial features will come across on my pictures. I focus on showing the way the artist really looks like, so that the picture doesn't look horrible, but beautiful. That's very important to me.

I also took pictures of him without his hat, with his stringy hair hanging down across his forehead. But I only rarely published these photos. He looks so fantastic with his hat on, that was Beuys!

You still prefer black-and-white photography, by now of course in a digitized version, but now and then in an analogue and digitally copied version. Why do you prefer that technique?

It allows for more imagination. For example, I photographed Gerhard Richter in the 1970s while he was sitting on a beautiful chair in his studio in front of his painting. His light blue eyes were gazing towards the horizon, and the many different shades of gray more than made up for the missing colors. His watery blue eyes are clearly discernible on this black-and-white picture.

Over thirty years ago, Joseph Beuys stirred up the art world with his happenings and performances. A new documentary shows previously unpublished audio and visual material, letting the visionary artist speak for himself. (13.02.2017)

The German artist Sigmar Polke was widely regarded as a provocateur. Some of his works are now on display in the  Frieder Burda Museum in Baden-Baden. "Alchemy and Arabesque" is devoted to two major themes in his work. (10.03.2017)

Why German photographer Wolfgang Tillmans is a 21st-century Renaissance man

Wolfgang Tillmans didn't exactly reinvent the art of photography, but he has managed to make it more political. The Tate Modern in London is celebrating the German photographer with a special exhibition. (16.02.2017)

He is one of Germany's best photographers, and his main theme is war. Andy Spyra told DW about the hurdles and limits of high-risk photography - and why it fascinates him. (03.01.2017)

Angelika Platen's intimate portraits of artists from Richter to Beuys

Angelika Platen has been documenting the art scene for over 50 years. Eccentricity, mystery or confidence: Artists' inner traits are revealed through her portraits. A retrospective of her work is on show in Berlin. (16.03.2017)