From photo-like paintings to out-of-focus works, he is consistently inconsistent and beyond his time. Gerhard Richter, at 85, claims to have to system - but has become one of the world's most expensive artists.

Gerhard Richter can walk through his chosen hometown of Cologne virtually unrecognized. He is inconspicuous, humble in appearance - a small, bearded and bespectacled man. What stands out about him is his constantly searching and questioning gaze.

Critics have referred to Richter as a "21st-century Picasso." He is one of the most successful painters alive today, and his works hang in the world's most important museums. Artworks with his signature on them fetch record-breaking sums. 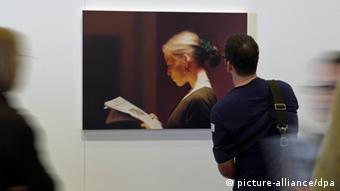 "The Reader" (1994) is pictured here at the New National Gallery

The "Kunstkompass" section of the magazine "Capital" has listed Richter as the top-grossing living artist. Needless to say, he's also been showered with awards.

Just like Picasso, who paved the way for modern art in the 20th century, Richter is hardly interested in fame. And he loves women - he's now on his third marriage.

Yet unlike the Spanish painter, Richter is not one for the public spotlight. He rarely provides interviews and hardly appears at the art world's glamorous gatherings. Quite the opposite of Picasso, Richter does not allow his personal life to influence his work. As his biographer Dietmar Elger noted, when painting private situations, Gerhard Richter always denied connections to his own life. 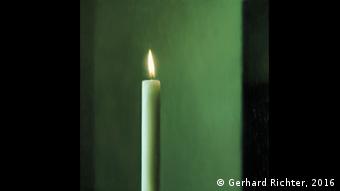 One thing he does share with Picasso: he is stylistically above and beyond other artists. That is true of his early Pop Art-inspired images and early attempts at abstract expressionism in the 1960s, which he referred to as "capitalistic realism." Slamming consumerism, it is Richter's ironic response to the official art doctrine of the former GDR, "socialist realism." That is something he left behind when he fled Dresden for West Germany in 1961.

An 'Atlas' through the ages

Shortly afterward, Richter started his "Atlas," something of a motive archive which compiled newspaper clippings, photographs, sketches, color studies, landscapes, portraits, still lifes, historical textiles and collages. It has been updated throughout the decades and was on display in 1997 at the Documenta in Kassel.

He paints landscapes, seascapes and cloud pictures in the Romantic tradition. Still lifes and portraits are also in his repertoire. Richter has brought modern painting into the photography era and, in doing so, he creates something new each time. 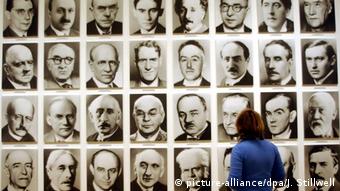 A German savior of the art of painting

That seems hard to believe. It would be hard to find anyone else who has explored the depths of painting as deeply and readily as Gerhard Richter. It was he who had accomplished something few in the art world believed possible.

"Richter saved the art of painting in the 21st century," his biographer and head of the Gerhard Richter Archive at the Kunstsammlungen in Dresden, Dietmar Elger, told DW in an interview. 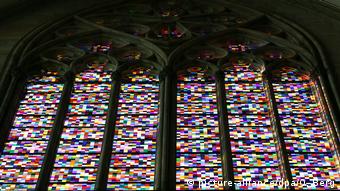 "I am fascinated by coincidence," the artist recently said. "Nearly everything is a coincidence. How we are made, why I was born here and not somewhere in Africa - everything is happenstance."

One of Richter's much-discussed public works of art is a stained glass window in the Cologne Cathedral. He left the design of the window and its 11,000 colored square pieces up to a computer. It is as multi-faceted and unfathomable as the rest of the collection of works by the artist, who turns 85 on February 9.

He came from East Germany, spent his adulthood West Germany and managed to become famous worldwide as a representative of unified Germany - even though few here would recognize him if they were to walk right by.

'Monument' to Aleppo opens to protests in Dresden

A peace memorial by Syrian-born artist Manaf Halbouni drawing attention to the parallels between Syria's war and the 1945 bombing of Dresden has been unveiled in Dresden - to loud protests. (07.02.2017)

After years in the making, Potsdam's Barberini Museum - spearheaded by patron and billionaire Hasso Plattner - is opening its doors. The first shows feature works by, among others, Monet, Renoir and Caillebotte. (20.01.2017)

While contemporary artist Gerhard Richter will be spending his 85th birthday in Venice, his adopted hometown of Cologne will be celebrating his works with a new exhibition at the Museum Ludwig. (09.02.2017)

German painter Gerhard Richter has been in the top league of international artists for decades. Born in what was then the Weimar Republic, he studied art in East Germany, then fled to the West, where he was a driving force in the post-war art scene.