'Monument' to Aleppo opens to protests in Dresden

A peace memorial by Syrian-born artist Manaf Halbouni drawing attention to the parallels between Syria's war and the 1945 bombing of Dresden has been unveiled in Dresden - to loud protests.

A new monument in Dresden: A peace memorial for some, 'scrap metal' for others.

"Monument," a memorial created by the Syrian-German artist Manaf Halbouni, was unveiled Tuesday in the city of Dresden. Designed to draw attention to the Syrian war while appealing for peace and humanity, the memorial consists of three buses erected on their sides beside the Frauenkirche church in Dresden's central Neumarkt square.

Halbouni, who was born in Damascus to a German mother and Syrian father, said the idea behind the public art piece came from a powerful image that was seen worldwide in 2015: Residents of Aleppo put bombed-out buses on their sides in the heart of the formerly thriving industrial city to protect themselves from sharpshooters.

The buses became a symbol of the resistance movement in the town which, by the end of 2016, had been nearly totally destroyed by war. 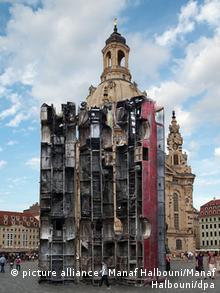 In Dresden, the sculpture is comprised of three outdated public buses. The artist said he intentionally uses buses that had not been wrecked, as a symbol of the peace that can still be found in Germany - unlike in Syria.

The Kunsthaus Dresden, a sponsor of the project, said that the artwork creates "a connection between the people of the Middle East and Europe and our shared destinies" and symbolizes "the suffering and unspeakable losses as well as the hope for reconstruction and peace."

A symbol of peace and forgiveness

The monument was unveiled Tuesday in an opening ceremony that was loudly protested by members of the right-wing nationalist party AfD and the Pegida movement. Dresden's Mayor Dirk Hilbert is under protection due to death threats he received for his approval of the 12-meter-tall (over 39-foot) sculpture. He was loudly booed as he attempted to give a speech celebrating the work.

"The right-wing populists, not only in our city but also across Europe, are building themselves up by forgetting," said Hilbert. That's why, he told the crowd at the opening, "Monument" is so important. 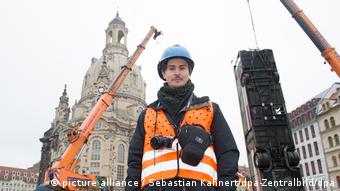 On display in the city through April 3, the installation was funded through donations from the local community. The artist said he found it important to show that there is a side to Dresden which stands in contrast to the anti-foreigner movement that has become associated with the city.

Halbouni, who studied art in Dresden and has had works displayed in London's Victoria and Albert Museum as well as at the 56th Bienniale in Venice, said the location of the installation is one of great meaning. It was chosen not only because of the artist's connection to the city, but also because of the history of Dresden, which was completely destroyed in World War II. More than 25,000 people died during three nights of Allied bombing in February 1945.

The restored Frauenkirche serves as a symbol of peace and forgiveness after war.

A new monument in Dresden: A peace memorial for some, 'scrap metal' for others.