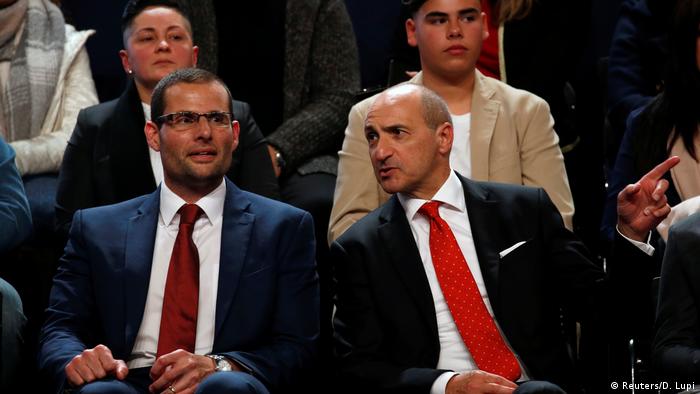 Robert Abela won a Labour Party leadership contest in Malta early on Sunday, meaning that he will be the EU country's next prime minister.

A lawyer, Abela beat out Deputy Prime Minister Chris Fearne for leadership of the Labour Party. He will be sworn in on Monday.

Considered an outsider who has only been a member of Parliament since 2017, Abela had previously sided with critics of the investigation into Caruana Galizia's killing, but he notably did not criticize Muscat during his campaign. The 42-year-old is also the son of former Maltese President George Abela. He has promised to engage citizens and focus on social issues, such as affordable housing.

The European Union's major institutions have been criticized for failing to do more to uphold the apparently crumbling rule of law in the EU's smallest member state. Muscat's chief of staff, Keith Schembri; tourism minister, Konrad Mizzi, and economy minister, Christian Cardona, resigned or suspended themselves last year after being questioned as part of the murder investigation. All three have been implicated in corruption scandals. Schembri and Mizzi were also named in the Panama Papers leaks of 2016.

The European Parliament sent an urgent delegation to Malta in early December to meet with Muscat, as well as representatives of the financial authorities, the police and members of Galizia's family, demanding quicker action in the investigations for murder and corruption.

The delegation chair, Dutch MEP Sophie in 't Veld, of the Alliance for Liberals and Democrats for Europe (ALDE), was cautious about Abela's election, saying she worried about descriptions of him as the "continuity candidate."

"Well, let's hope not," she told DW on Sunday. "We will have to work with whoever is prime minister, but we expect that person to follow up on our recommendations. That's all we want."

On December 18, the European Parliament almost unanimously passed its "Rule of Law in Malta" resolution, initiated by the Greens/EFA group. The vote called on the European Commission to enter into dialogue with Malta in the context of its framework on the rule of law.

Among other things, the resolution noted that the European Parliament was "highly concerned that numerous other investigations into related cases of money laundering and corruption have not advanced or have not even been launched, especially with regard to the former Chief of Staff of the Prime Minister and the former Minister for Tourism."

Sven Giegold, a German Green and another member of the European Parliament's Malta delegation, was also cautious about Abela's election. "I don't know Mr. Abela personally, but the Labour Party and its new start lacks credibility as long as it does not clearly distance itself from Schembri and Mizzi and their businesses," he told DW. "The majority of the Maltese Parliament has actually backed the government, so there can be no talk of a new start there." 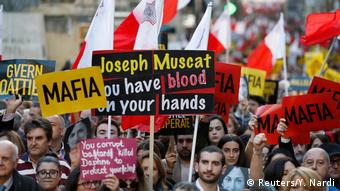 Malta has seen several demonstrations in the past months

Giegold also reserved some criticism for the European Commission, whose new president is Germany's Ursula von der Leyen. "The commission needs to do what the European Parliament has demanded," he said. "Namely, initiate an investigation as part of the rule-of-law process. The murder investigation might be making progress, but, as far as fighting financial criminality goes, nothing has changed."

In a statement issued in early December, von der Leyen condemned the murder, but refused to comment directly on national investigations in Malta and did not promise any EU rule-of-law investigation. "The commission is also in touch with the Maltese authorities on the reform of the judicial system and will continue to work with the authorities to accelerate these reforms," the statement said.

The MEPs were scathing about progress in Malta following their brief trip in December. At a press conference, Giegold told The Malta Independent that he was "not convinced that there was a new start, a new attitude at the MFSA [Malta Financial Services Authority], on prudential regulation, consumer protection and measures to combat money laundering."

The parliamentarians also want to see an end to Malta's "cash for passports" program, which grants foreign businesspeople Maltese citizenship — and therefore EU citizenship — in exchange for large investments into a national development fund.

In t' Veld was particularly scathing about the role played by the European Council, which represents member state governments in the EU. "The commission of Ursula von der Leyen has to be a lot tougher," she said. "But worse is the European Council. The council ignored what is going in Malta and refused to have a serious debate: They are ducking their responsibility. They are standing by and watching how the rule of law is being destroyed, and they're not lifting a finger."

Opinion: Malta is a wake-up call

Within just a few years, Malta turned into a mafia state. This must be a wake-up call for the EU to be more proactive in its fight for the rule of law, says DW's Barbara Wesel. (02.12.2019)