Malaysia′s Mahathir dumps Chinese projects amid ′new colonialism′ fear | Asia | An in-depth look at news from across the continent | DW | 21.08.2018

After visiting Beijing, Malaysia's PM Mahathir has canceled a number of Chinese infrastructure projects, saying his debt-ridden country cannot afford them at this moment. Will the move sour Malaysia's ties with China? 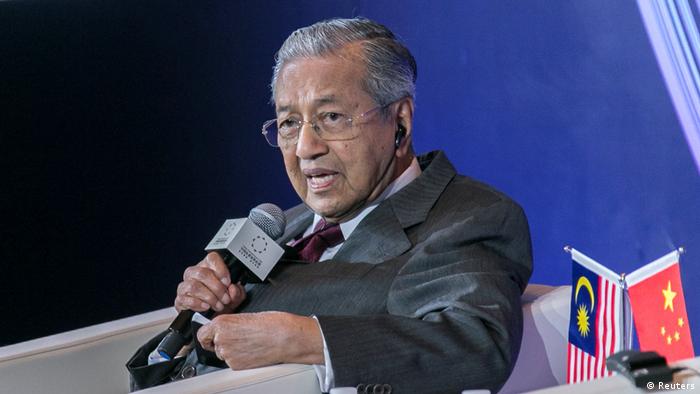 On Tuesday, Malaysia's Prime Minister Mahathir Mohamad ended his five-day visit to Beijing by announcing that China-financed projects in Malaysia worth billions of dollars would be cancelled.

Speaking to Malaysian reporters, Mahathir said that Chinese President Xi Jinping had "accepted" the reasoning behind putting the projects on ice.

"It's about pouring in too much money, which we cannot afford, cannot repay, and also because we don't need these projects for Malaysia at this moment," Mahathir said, adding a warning about bankruptcy and Malaysia's ballooning national debt, which currently hovers around $250 million (€217 million), according to the Malaysian Ministry of Finance.

The projects include a $20 billion railway, the 688 kilometer (430 mile)-long East Coast Rail Link (ECRL), which would have connected Malaysia's east coast with southern Thailand and the Malaysian capital Kuala Lumpur. Construction of two gas pipelines worth $2.3 billion is also being discontinued. 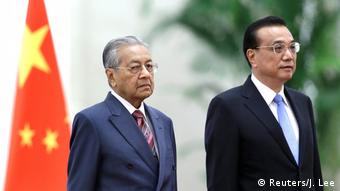 The projects are part of Beijing's Belt and Road initiative that finances and constructs infrastructure projects across Asia. The ECRL project was negotiated in 2016 by Malaysia's ex-Prime Minister Najib Razak and President Xi.

As opposition leader before he was elected prime minister in May, 92-year-old Mahathir was a prominent critic of Chinese-financed infrastructure projects in Malaysia during Najib's government.

The Najib government sought investment from China, even as it was wracked by an embezzlement scandal in which it was accused of misappropriating resources from Malaysia's 1 MBD state investment fund.

Mahathir's Pakatan Harapan (PH) party won 115 out of 222 seats in parliament, he now leads the Southeast Asian nation of 31 million people. While amicable relations with China are important to Malaysia's new government, Mahathir is set to take a far more critical stance toward Beijing than his predecessor.

Malaysia made in China?

China is the number one source of foreign investment in Malaysia. Chinese state-run construction companies, such as China Communications Construction Company (CCCC), which was also slated to have the ECRL contract, are working on building skyscrapers in Kuala Lumpur's Central Business District.

The gigantic real estate project Forest City located in Johor state bordering Singapore is being developed with a $100 billion investment from the Chinese real estate developer Country Gardens. The project calls for the development of four artificial islands, which will amount to an area four times larger than Central Park in New York City. When completed, Forest City will provide homes for 250,000 families, and it is marketed to wealthy Chinese.

According to the World Bank, state-run Chinese companies have invested $35.6 billion in Malaysia between 2010 and 2016. This massive amount of investment is viewed with suspicion by domestic business concerns.

"The special thing about Chinese investments is that they control and own the entire value chain," Michael Kang Hua Keong, president of the SME association of Malaysia, a small-business advocacy group, told DW.

In other words, Chinese investors bring in their own employees and create no new jobs in Malaysia.

As the former opposition leader in Malaysia, Mahathir was the strongest critic against opening the door to Chinese investment.

"The government of Najib Razak gives away land to the foreigners, who build luxury homes, which locals can not afford," Mahathir once said at as opposition leader at a parliamentary hearing.

However, during talks with Chinese Premier Li Keqiang on Monday in Beijing, those differences didn't take center stage.

"I believe that China will look sympathetically towards the problems that we have to resolve and perhaps help us in resolving some of our internal fiscal problems," said Mahathir.

The Malaysian prime minister however warned against a "new version of colonialism" happening because poor countries are unable to compete with rich countries just in terms of open free trade.

"It must also be fair trade," said Mahathir.

China's state-run CCTV later said Mahathir told Xi that China "has historically never colonized Malaysia" and China's development is "not a threat" to his country.

Chinese state media has taken Mahathir's statements to mean that Malaysia wants to intensify trade relations with China and remain a trusted partner for China's Belt and Road Initiative.

"The meeting with China's leadership contributes to increased trust and clears up unanswered questions," wrote Su Xiaohui, a director at the Chinese Institute for International Studies, in a Communist Party publication.

Su's reasoning for this is that Mahathir rode in a Chinese-built high-speed train to send a positive message about the ECRL. However, this assertion is dubious, considering the project was halted by Malaysia.

Chinese banks, however, have taken a less optimistic view than the line espoused by the Chinese government that Mahathir's visit was politically benign and Chinese construction in Malaysia can continue.

A high-ranking manager at a state-run Chinese bank told DW on condition of anonymity that his bank is prepared for the worst outcome.

"The termination of Chinese projects in Malaysia would be a big defeat for the Belt and Road initiative," he said. "Chinese investors would suffer big financial losses and the number of bad loans on the books at Chinese banks would increase."

Mahathir said that Malaysia would have to pay "substantial" penalties to leave the projects. According to the AFP news agency, the ECRL project was mostly funded by a loan from the Export-Import Bank of China. According to Malaysia's Ministry of Finance, the majority of the costs for the gas pipeline project have already been paid out to Chinese contractors, despite the work remaining largely unfinished.