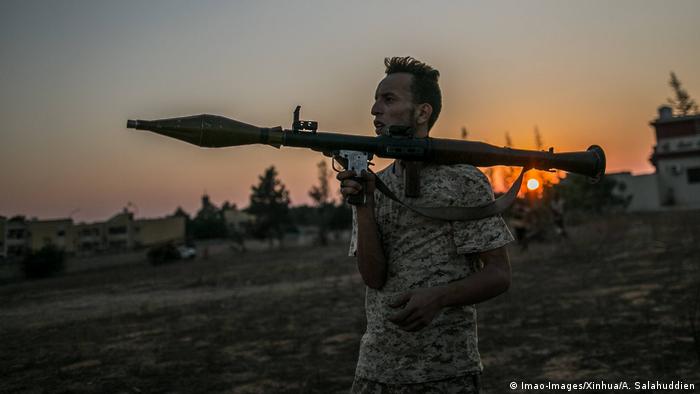 French President Emmanuel Macron has accused Turkey of violating the agreement established at a Berlin summit to rein in the Libya conflict by halting foreign interference, saying Turkish warships and Syrian fighters arrived in the North African country.

"In the past few days — in the past few days! — we saw Turkish ships accompanied by Syrian mercenaries arriving on Libyan soil. This is an explicit and serious violation of the Berlin agreements," said Macron on Wednesday after meeting with the Greek Prime Minister Kyriakos Mitsotakis in Paris.

The Turkish government's actions are entirely contradictory to what Turkish President Recep Tayyip Erdogan had committed to at the Berlin summit earlier this month, Macron asserted.

Macron's comments come a week after world powers backing opposing Libyan factions had agreed to an arms embargo at a conference hosted by Germany.

In response to Macron's accusations, Turkey blamed France for the instability in Libya. "The main [actor] responsible for the problems in Libya since the crisis started in 2011 is France," said Turkey's foreign minister Hami Aksoy in a statement.

Aksoy said Macron was "trying to set the agenda with fanciful claims."

Earlier on Wednesday, the Turkish military said four frigates and a refueling ship were located outside of Libya's territorial waters in the central Mediterranean, in order to support NATO operations in the region and conduct security activities for maritime trade routes.

After meeting with Greek Prime Minister Mitsotakis, Macron also announced on Wednesday a strategic security partnership which included an increased presence of the French Navy in Greece.

After the Berlin summit, on January 25, the United Nations said that several countries which back rival factions in Libya had violated the arms embargo since the agreement.

The UN mission to Libya (UNSMIL) said cargo planes full of advance weapons, armored vehicles, advisers and fighters had arrived at western and eastern Libyan airports, which risked "plunging the country into a renewed and intensified round of fighting.”

The UN-backed Government of National Accord, led by Fayez Sarraj in Tripoli, is backed by Turkey, Qatar and Italy — while rival faction Libyan National Army, led by military strongman Khalifa Haftar, is supported by Russia, France, the UAE and Egypt.

Libya has been in a state of turmoil since the ouster and killing of longtime dictator Muammar Gaddafi in a NATO-backed uprising in 2011 and has become a battleground for proxy forces.

DW's editors send out a selection of the day's hard news and quality feature journalism. Sign up here.