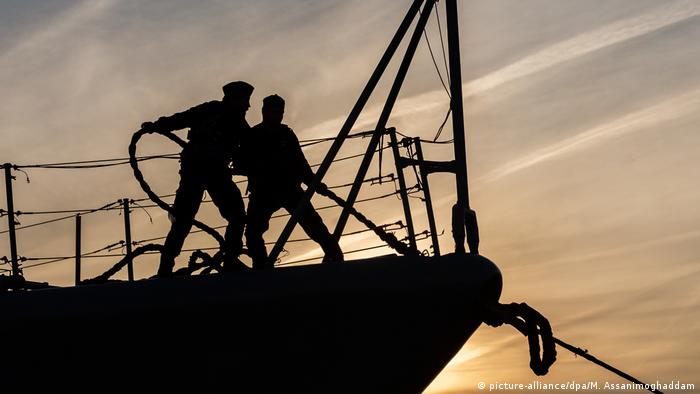 Key international actors involved in the Libyan conflict met in Berlin to pave the way toward a cease-fire agreement and peace talks. The Libyan conflict has morphed into a proxy war over regional dominance and control over oil. And as the conflict will not be resolved militarily, the warring factions are now willing to seek a political solution.

At the EU foreign minister's summit in Brussels on Monday, German Foreign Minister Heiko Maas insisted that one should "focus on turning Libya's fragile truce into a permanent cease-fire" before thinking about which role the European Union could now play in the North African country.

Despite the success of Germany's diplomatic efforts in hosting the Libya conference, Maas remains cautious. He hopes the planned talks in Geneva, under UN auspices, will go ahead this week. At Sunday's Berlin summit, the various parties had appointed negotiators to that end, but Maas said achieving peace in Libya would take time and that now the first step would be to create the appropriate conditions on the ground.

In Brussels, EU foreign policy chief Josep Borrell praised the outcome of the Berlin summit, calling it a great success of German diplomacy. Indeed, Germany will be satisfied that it has now has the status of a key diplomatic player in the region. French Foreign Minister Jean-Yves Le Drian also praised Germany, saying the other EU member states would back the Berlin agreement and work toward bringing peace to Libya.

No concrete decisions have been made to this end, however. In the short run, EU member states must discuss and agree in what sense they want to get involved in Libya, and how much money they are willing to spend. The plan is to reach a concrete agreement at the next foreign ministers' summit in February.

Borrell, who only took up his job in December, wants the bloc to play a stronger role in world affairs. The Spaniard has made clear his conviction that if the EU wishes to become a bigger player on the world stage, it must begin taking greater responsibility.

So will Operation Sophia be reactivated? Borrell said Monday he supported reviving the EU's naval mission off the Libyan coast, saying the EU needs to do more to defend its interests.

"It's clear that the arms embargo requires [a] high level of control and if you want to keep the cease-fire alive someone has to monitor it," he said. He's pushing for action, hoping the EU will not be hampered by months of procedural problems. He has also called for satellite and aerial surveillance data to this end.

According to Borrell, "most weapons are brought to Libya via the desert through neighboring countries." Adding that for a "mission on the ground we would need a stable cease-fire to guarantee the safety of such a mission." He did not, however, specify whether he would favor a kind of EU blue beret mission, or a civilian observer mission like in Ukraine. In Borrell's view, one must first wait for the UN Security Council to reach a decision.

Operation Sophia, launched in 2015, was aimed at monitoring human traffickers off the Libyan coast with the help of marine vessels, helicopters and planes. EU actors also helped train the country's coast guard. But the mission ended last spring because Italy's then-interior minister, Matteo Salvini, refused to allow rescued migrants to go ashore in Italian ports. Since 2015, the mission's vessels have managed to rescue some 50,000 people from drowning in the Mediterranean.

Read more: Opinion: Is Putin's luck in Libya running out?

While Italy's new government has adopted a somewhat less antagonistic approach, Foreign Minister Luigi di Maio nevertheless stressed in Brussels that Operation Sophia "must be deconstructed and put together in an entirely different fashion; it is a mission that must ensure no weapons get into Libya."

Di Maio was adamant the mission should focus only on monitoring the arms embargo. Even if Operation Sophia is given a different mandate, all EU vessels are still required by international law to rescue anyone in distress at sea. The question will be, therefore, at which ports these migrants will be allowed to disembark. Tensions between Italy and the other EU states over who should take in asylum-seekers are bound to escalate once again.

Fighters from war-torn Syria, Sudan and other neighboring states have flooded into Libya, and Borrell said it was deeply concerning for the EU to watch these foreign militias exacerbate the Libyan conflict, making the situation in the country increasingly volatile and dangerous. Now, following the Berlin conference, Borrell said all major powers involved — Turkey, Russia, Egypt and others — ought to honor their pledge not to interfere in Libya, in order to allow for a diplomatic solution to the conflict.

UN negotiators have been striving to facilitate such a diplomatic solution for years — so far, without success. Now, much will depend on whether supporters of self-styled military leader Khalifa Haftar, whose militia has been advancing, will be able to convince the general to engage in talks. If they fail to do so, Libya will not be stabilized — no matter how united and determined the EU appears in its diplomatic effort.