Following a meeting of EU foreign ministers, the EU's foreign policy chief has said EU countries have agreed to restart the bloc's Mediterranean naval mission with a focus on enforcing an arms embargo on Libya. 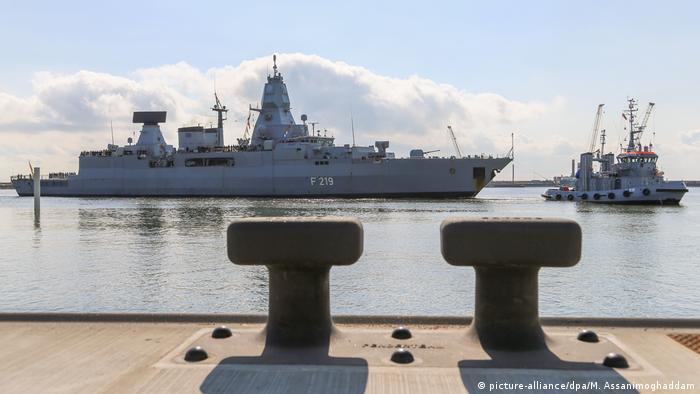 The European Union's foreign ministers gathered in Brussels on Monday for talks on how to implement a peace process in Libya, as the country's ongoing internal conflict has turned it into a gateway for illegal migration into Europe.

However, it collapsed in March 2019 under pressure from Italy's former populist government due to disagreements about distributing the people who were rescued.

Italian Foreign Minister Luigi Di Maio said Monday that Sophia could be used only if it is "dismantled and reassembled in a completely different way.''

'Someone has to monitor it'

Borrell said he supported reviving the EU's naval mission off the Libyan coast, saying that the EU needs to do more to defend its interests.

"It's clear that the arms embargo requires [a] high level control and if you want to keep the ceasefire alive someone has to monitor it," Borrell said Monday.

He also said the EU needs to expand its capability in the context of the Sophia mission.

"The arms embargo has to be controlled not only by sea, because most of the arms go through the desert. We can control the sea, but we also have to control the land and air," he said, adding that this "will require satellite and air tools," which are not currently included in the Sophia mission.

Borrell said Monday there had been "no concrete decision" on monitoring the ceasefire, but added that ministers were discussing how the EU "can engage more forcefully."

He said EU ambassadors and experts have been asked to present "concrete proposals on how to implement the ceasefire and enforce the UN arms embargo, by the time the next minister's meeting in Brussels on February 17.

Monday's meeting follows on the heels of a Libya summit in Berlin on Sunday, where the EU vowed to do whatever was necessary to implement a United Nations arms embargo and any ceasefire.

Despite the agreements secured during the summit in Berlin, German Foreign Minister Heiko Maas cautioned that it would not lead to an immediate halt in fighting and that the issue still needs to be discussed in the UN Security Council.

"In this respect, yesterday was only the starting signal that the civil war in Libya could be turned into a political process," Maas told reporters.

World leaders at the summit in Berlin agreed to uphold a UN arms embargo and to end military backing for the country's warring factions. Foreign powers like Turkey, Russia, France and Egypt agreed to stop interfering in the conflict in Libya.

Since the overthrow of long-standing ruler Moammar Gadhafi in 2011, Libya has been in a state of flux. The UN-recognized Government of National Accord (GNA) under Prime Minister Fayez Sarraj holds the capital Tripoli, but since last April, it has been under sustained attack by rebel general Khalifa Haftar's Libyan National Army (LNA), which is supported by a rival administration based in the eastern city of Tobruk.

The Iran nuclear deal is "more important than ever," the EU's foreign policy chief has told his Iranian counterpart in a "frank dialogue" over rising tensions in the Middle East. (16.01.2020)

Will new measures to fight terrorism in the Sahel region be enough?

France and the G5 Sahel nations have announced they will reinforce their fight against terrorism in the region. But experts doubt the pledge will be enough to make the Sahel secure again. (14.01.2020)

Ukraine's president called for the immediate de-militarization of Zaporizhzhia nucear plant. Meanwhile, EU defense ministers have agreed to explore options for a training mission in Ukraine. Follow DW for the latest.