Macedonia's Social Democrat leader Zoran Zaev has said he expects to be able to form a government. The west has condemned Thursday's violent storming of the parliament and attack on Zaev and his allies.

A day after nationalist factions stormed the Macedonian parliament and left Zoran Zaev bloodied and bruised, the Social Democrat leader on Friday said he was confident he could form a new government.

Macedonia has had a hung parliament for almost five months after December's parliamentary election saw no party able to claim a majority. Zaev managed to form a coalition with three Albanian parties representing the country's second-largest ethnic group, who on Thursday together voted for a new parliamentary speaker. The move was opposed by former Prime Minister Nikola Gruevski and his nationalist VMRO-DPMNE party, alleging that national sovereignty would be undermined. The move was then violently contested by protesters who stormed the government building.

On Friday Zaev, sporting white adhesive bandages over his forehead, described the attack on him as "attempted murder" and accused Gruevski and President Gjorge Ivanov of provoking the violence and sacrificing the state's interest in favor of their own personal gain. 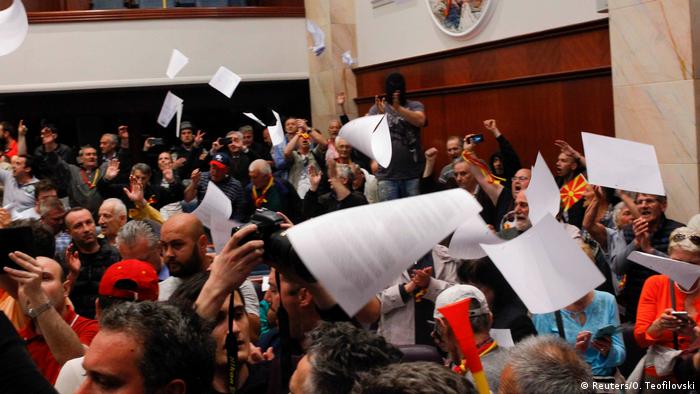 Gruevski meanwhile denounced the violence, saying Zaev's SDSM party had "knowingly decided to violate the law and the constitution, which directly caused the event that ensued."

Foreign Minister Nikola Poposki (VMRO-DPMNE) told DW that the government would hold those responsible to account for the violence, but stressed that to find "a way out of the political crisis, which bears serious risks, since Macedonia is very important for regional stability; we have to choose the path of dialogue (with the opposition)."

Nikola Poposki: Those who participate in violence must be brought to justice

Germany and the United States were among the world powers to decry Thursday's violent scenes in Skopje.

Germany's Foreign Minister Sigmar Gabriel said the storming of the parliament can not be reconciled with "what we expect of a European Union accession candidate" and that a new government must be formed in accordance with democratic elections.

The fact that "the current governing party is blocking this and its supporters stormed parliament and beat up lawmakers is unacceptable," Germany's top diplomat said.

The US State Department, meanwhile, called on Macedonian authorities "to hold accountable" to those responsible for the violence.

The State Department said in a statement that "violence has no place in the democratic process," and urged all parties to remain calm and respect the law. It also said it work with the Macedonian parliament's new speaker, Talat Xhaferi, "to support democracy and to help Macedonia move forward on its European path."

Russia had a different take on Thursday's brawl, accusing the west of backing Zaev's attempt to seize power.

"The West is obviously pandering to the advocates of a Greater Albania," the Russian Foreign Ministry said.

The outbreak of violence in Skopje is hardly surprising. The attack on the Macedonian parliament is the result of a long-planned attempt to destroy democracy, says DW's Boris Georgievski. (28.04.2017)

Macedonia police fired stun grenades to hold back 200 protesters objecting to the election of an Albanian as parliamentary speaker. Some of the lawmakers were injured. (28.04.2017)