Macedonia police fired stun grenades to hold back 200 protesters objecting to the election of an Albanian as parliamentary speaker. Some of the lawmakers were injured.

In the Former Yugoslav Republic of Macedonia several dozen protesters broke through a police cordon on Thursday evening and made their way into the parliamentary lower chamber to protest against the election of a new parliamentary speaker. The protesters - supporting the conservative VMRO-DPMNE party - entered the chamber waving Macedonian flags and singing the national anthem.

Zoran Zaev - leader of the Social Democrats (SDSM) - was hit by a projectile and had a gash in his forehead. Local TV showed at least one masked man inside the building.

A spokesman for an ethnic Albanian party, Artan Grubi of the Democratic Union for Integration party, said Zaev and at least three other MPs had been injured during the attack. 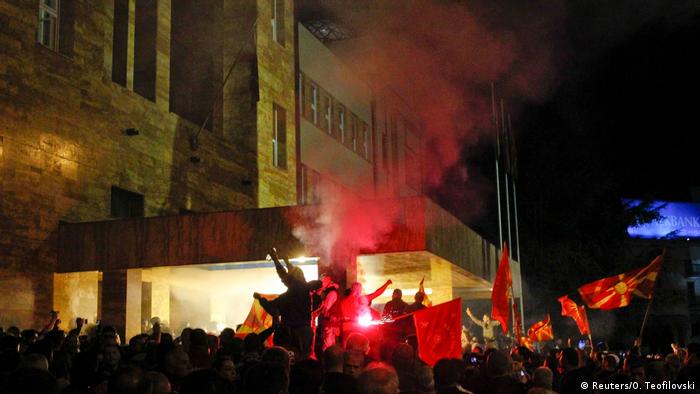 The skirmishes followed the SDSM and its allies - smaller parties representing the ethnic Albanian minority - voting in a new parliamentary speaker, Talat Xhaferi, an ethnic Albanian. Their aim was to end the political deadlock that has left parliament unable to fill the position for three weeks. Zaev suggested this week that a new speaker could be elected using new procedures but this was rejected by VMRO as "an attempted coup."

Former prime minister and VMRO leader Nikola Gruevski called later on Thursday evening for calm. "People should not respond to the provocations of the SDSM and those who want to push the state into even deeper crisis," he wrote on Facebook. Gruevski is being investigated by a special prosecutor on suspicion of illegal wiretapping of thousands of Macedonians.

Macedonia has been without a government since last December, when VMRO won elections, but did not gain enough votes to form a government. For a decade until last December, Macedonia had been ruled by the conservative VMRO-DPMNE coalition. At December's election the party won 51 of 120 seats - two more than the SDSM - but failed to reach a deal with the kingmaking Albanian parties.

Coalition talks broke down in January over ethnic Albanian demands that Albanian be recognized as an official second language.

Zaev later secured the cooperation of one of the main ethnic Albanian parties, giving him 69 seats, but President Gjorge Ivanov refused to grant him a mandate to form a government. The president said he was concerned over demands by Albanian parties that Albanian be made an official second language nationwide.

About a quarter of the two-million people in the country - a former Yugoslav republic that aspires to join both NATO and the EU - are ethnic Albanians. 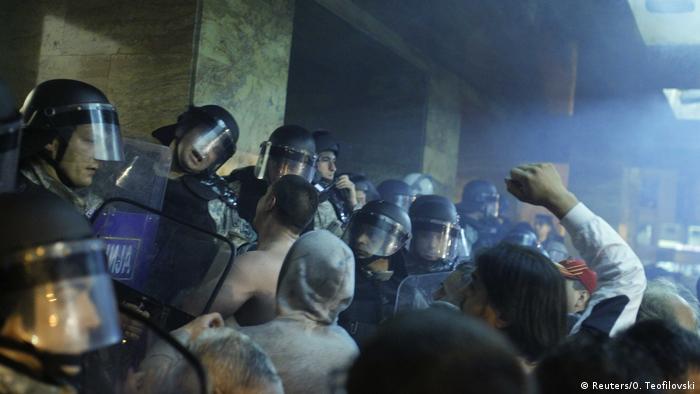 Police hold off protestors attempting to storm the parliament building.

The protest has caused concern in neighboring Albania. The country's foreign ministry said it is monitoring "the escalation of the situation in Macedonia with great concern."

"Such scenes of violence against the elected representatives of the Macedonian people are unacceptable," the ministry said in a statement issued on Thursday.

The EU and the US have urged President Ivanov to reverse his decision over the formation of a government.

Sweden's ambassador to Macedonia, Mats Staffansson reminded the country's politicians of the need for dialogue and said "it is the responsibility of the police of this country to make sure that this kind of violence does not happen."

Tens of thousands protest in Macedonia during EU visit

Tens of thousands have demonstrated in Macedonia's capital, Skopje, against a proposed government coalition. The protests are linked to a visit to the country by EU Enlargement Commissioner Johannes Hahn. (22.03.2017)