Journalists targeted as crisis in Macedonia escalates | Europe| News and current affairs from around the continent | DW | 03.03.2017

Masked men have attacked Macedonian reporters at a rally of the nationalist VMRO-DPMNE party. Other journalists in the small Balkan country have been assaulted in restaurants - and even at home. 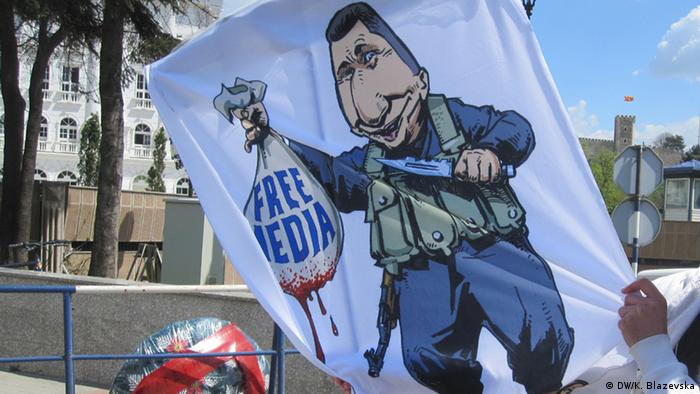 Two reporters were beaten by unknown assailants in the center of the Macedonian capital Skopje while covering a rally of supporters of the VMRO-DPMNE party. Both ended up in hospital, but their attackers have not been found - just like in many other similar cases. Journalists who later commented on this incident on social media were accused of being "traitors" and "mercenaries" by many users. The smear campaign specifically targeted journalists from the "Balkan Investigative Reporting Network" (BIRN).

Snap elections in Macedonia were called in hopes of putting an end to the domestic political crisis in the country. After a corruption scandal and mass protests against the government, battle lines have been drawn. (09.12.2016)

'Macedonia will only survive as a democratic country'

The latest elections have failed to put an end to the political crisis in Macedonia. Gudrun Steinacker, former German ambassador to Macedonia, explains what can be done to help the small Balkan country. (07.02.2017)

On Wednesday, two young men showed up at the door of Branko Trickovski's home, a retired journalist known as a critic of the VMRO-DPMNE party and its ten-year-rule in Macedonia.

"Trickovski, you should be ashamed of yourself, you traitor," yelled one of them, while the other was busy recording the attack he later posted on YouTube.

On Thursday, Borjan Jovanovski, another famous Macedonian journalist, was verbally abused and told he was a traitor. An unknown man even spat at him.

Selmani: 'Gruevski should pull back his thugs'

Jovanovski and many of his colleagues have been facing attacks and even death threats for years, but the latest incidents are "a culmination of events over the past four years", says Naser Selmani, head of the Journalists' Association of Macedonia, ZNM.

"The government of [VMRO-DPMNE leader] Nikola Gruevski is coordinating attacks on journalists in order to prevent objective reporting on events in Macedonia," he stated. "I want to convey a message to Gruevski to pull back his thugs."

The VMRO-DPMNE later denied any responsibility for the attacks and accused Selmani of "lying and manipulation."

More than 100 journalists from the Balkans united in the informal Journalists Network expressed their solidarity with Macedonian journalists in a letter. "Our colleagues that perform their work professionally are constantly exposed to threats and pressure, which endangers their physical and professional integrity," they stated, underlining that the situation was "getting worse" for Macedonian media.

Since Gruevski and his party came to power in 2006, Macedonia's position has deteriorated on all relevant international lists that monitor the state of a country's democracy, respect for human rights and press freedom. According to Freedom House, it is the only European country where the press is "not free" - along with Turkey and Russia. Disclosures from 2015 that Gruevski allegedly ordered the phones of political opponents, judges and other officials to be tapped caused public outrage.

Following former Prime Minister Gruevski's resignation in January 2016, the country was run by an interim government in a deal brokered by the European Union until the elections in December. 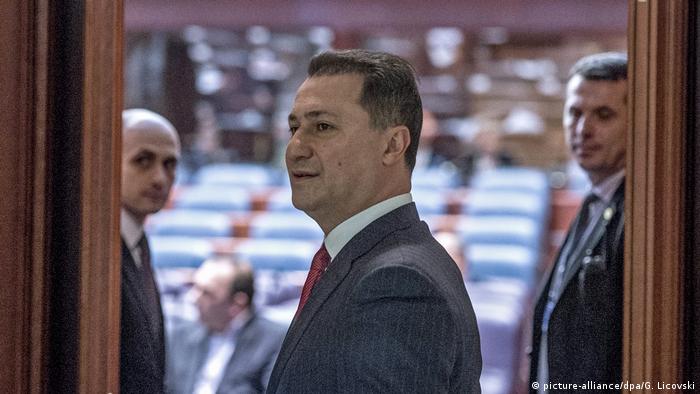 Nikola Gruevski, the leader of the conservative nationalist party VMRO-DPMNE

No government, no parliament

The VMRO-DPMNE won these elections by a tiny margin, but failed to form a new government. All political parties representing Macedonia's Albanian minority refused to be part of a coalition with Gruevski's party. Instead, they agreed to cooperate with the opposition Social Democrats (SDSM) who promised more rights for the Albanian community that comprises around one quarter of Macedonia's population of two million.

Gruevski called upon his supporters to oppose a new government led by the Social Democrats by protesting on the streets. His ally, president Gjorge Ivanov, refused to give the mandate to SDSM-leader Zoran Zaev.

Zaev accused Ivanov of a coup d'etat, while experts talk about lawlessness as the country enters its third month without a functioning government and parliament.

Journalists fear for their lives

After dozens of unresolved verbal and physical attacks on journalists in the past years, the party VMRO-DPMNE and its supporters are using the current political limbo to launch fresh attacks against critical media and civil society: Gruevski has already announced a process of so-called "De-Sorosization" directed against all NGOs and media linked to US billionaire George Soros. A campaign led by an obscure group called "Stop Operation Soros" portrays independent NGOs and media as "traitors" and "foreign mercenaries" following Gruevski's recent statements. Calls for attacks or even the lynching of certain critical journalists are occurring almost daily on social media - and even some pro-government media outlets chime in.

After years of censorship, Macedonian journalists now have to fear for their lives, too: "Verbal violence promoted by the government has led to a situation in which journalists and other media workers are no longer safe - neither at work nor inside their homes," Tamara Causidis, head of the Independent Trade Union of Journalists in Macedonia, concluded.