Macedonia police deploy tear gas on refugees at Idomeni | Europe| News and current affairs from around the continent | DW | 10.04.2016

Macedonian police have deployed a battery of nonlethal force on refugees at Idomeni. Refugees who've been stuck at the crossing for over a month tried to break the fence blocking their journey toward northern Europe. 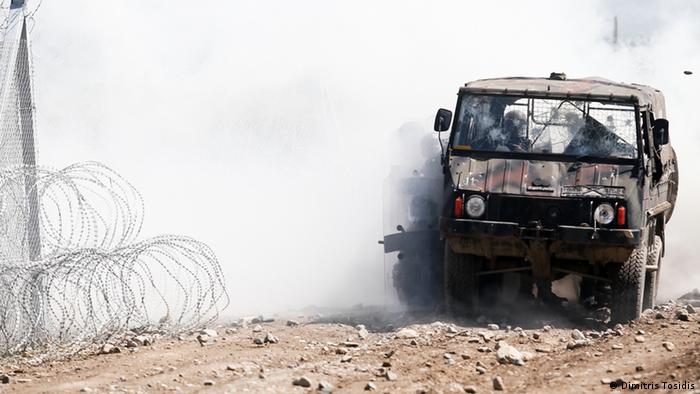 Refugees had gathered in front of the Greek police barricade at the Idomeni border crossing to Macedonia by 9 a.m. on Sunday. Those at the front held up paper placards with peaceful slogans as they faced down a heavily fortified Greek police deployment. Three buses blocked the railroad tracks, and extra forces stood by, ready to intervene.

For the first couple of hours the protests were calm. After speaking with Greek police, five refugees even agreed to go to the border to negotiate with the Macedonian authorities.

"We are not the ones who keep the borders closed," a Macedonian police officer said with the help of an English-speaking interpreter. "We are following Europe's orders. Please remain calm and peaceful and do not try to break the fence."

One of the representatives responded: "We understand, and we want to be peaceful. But behind me there are 10,000 people - refugees who are fleeing war - and they have been here for months now. We want a solution."

Hundreds of refugees moved toward the fence. The first ones to arrive tried to cut the barbed wire at the spots left unprotected by the Macedonian riot police. And then the first tear gas canisters were thrown. Tear gas and chemicals kept on coming in an effort to keep people from approaching the fence. Some of it was fired directly at the refugees; sometimes canisters were lobbed deep into the surrounding Greek farmland as Greek police watched. 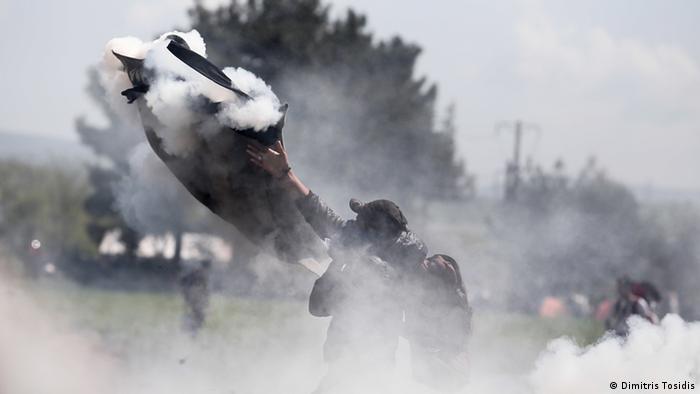 A man attempts to stop the tear gas from spreading

Clouds of chemicals spread throughout the refugee camp and the village of Idomeni. People with red eyes attempted to cover the gas clouds with blankets. Some refugees had smeared toothpaste on their faces, foreseeing the tear gas and hoping to mitigate its effects. Activists had brought washbasins to allow those who had been hit to rinse their eyes.

"Do you see this?" a refugee who was watching the clashes said. "This is like Palestine, Gaza."

The Macedonian police deployed the tear gas for over two hours. They even threw stones and later fired water cannons and rubber bullets. People were fainting; volunteers and activists rushed to get them out of the conflict zone and provide first aid. By early evening, Doctors Without Borders reported treating at least 300 people for tear gas and trauma. 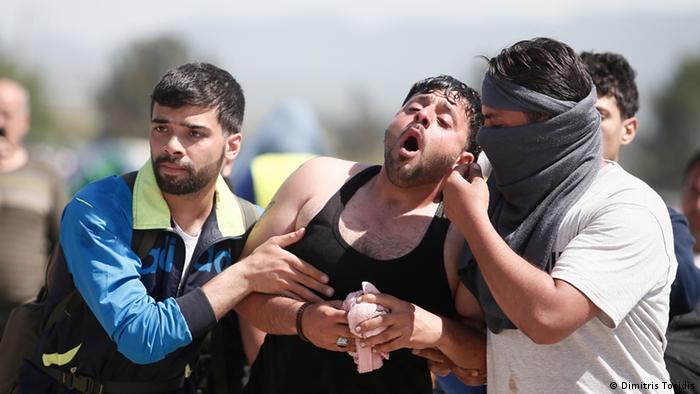 Men help a comrade who fainted during the clashes

Greece's government immediately condemned the use of violence by the Macedonian police. Refugee committee spokesman Giorgos Kyritsis said the use of chemicals and stun grenades against a vulnerable population was to be condemned, a sentiment that was shared by international NGOs.

"Clashes, tear gas, desperation at Idomeni are symptoms of Europe's disease when it comes to refugees," said Gauri van Gulik, Amnesty International's deputy Europe director. "As long as people are not offered a solution, a path to safety, and they are forced to sleep in the mud, this will only get worse. Europe has to offer refugees relocation urgently, and they have to stay in dignified reception facilities while they wait."

The conditions have led to anger toward the European Union and the Balkan states that have tried to restrain the refugees to Greece with few prospects for their next steps. Although the European Union has focused on deporting refugees from the Greek islands as part of its one-for-one deal with Turkey, the people in Idomeni are desperate for a solution.

"We need to have a Skype meeting three times per week, three hours per day," said Adnan, a Syrian refugee who has been in Idomeni for over a month. "This isn't working. The other camps are worse than here, and some people are returning to Idomeni." 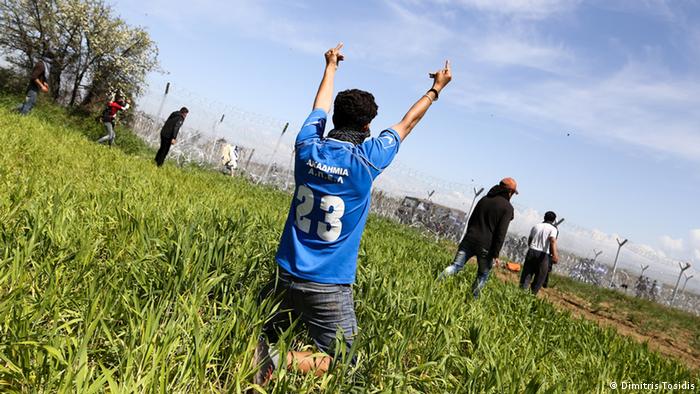 The fence was an unexpected barrier for many refugees

Sunday's chemicals have proved no match for people's determination. With limited information from authorities and no apparent plan for Idomeni in the works, the 11,000 people living there are open to any statements that might give them a dash of hope, however unlikely, whatever the source.

"The Macedonian police came and told us that if we are more than 5,000, they 'will open the door,'" said Mohammed, who watched Sunday's clashes from a safe distance with his wife. "They will not be able to stop us. We will be able to cross and they will let us. They are the ones who told us to come here today."