Lviv: Living in the shadow of Russia′s war with Ukraine | Europe | News and current affairs from around the continent | DW | 21.04.2022

Lviv: Living in the shadow of Russia's war with Ukraine

The western city of Lviv, until recently seen by many as a safe haven, has taken in hundreds of thousands of refugees since the start of Russia's invasion of Ukraine. Under the looming threat of attacks, life goes on. 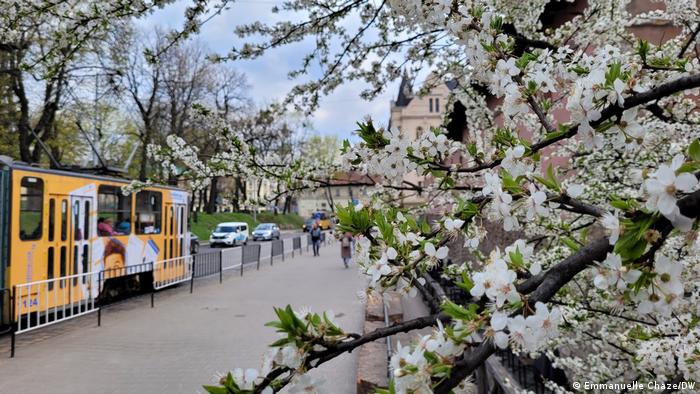 Lviv, about 70 kilometers (40 miles) from the Polish border, has been left relatively unscathed

It's spring in Lviv. Here, hundreds of kilometers from the capital, Kyiv, and the front line in the Donbas region, it would be easy to forget that war is raging.

The historic city center — listed as a UNESCO World Heritage Site — is buzzing with people. Amid a myriad of trendy cafes and cozy restaurants, street musicians perform here and there. Baboosias, the affectionate Ukrainian word used for "grannies," sell beautiful daffodils. 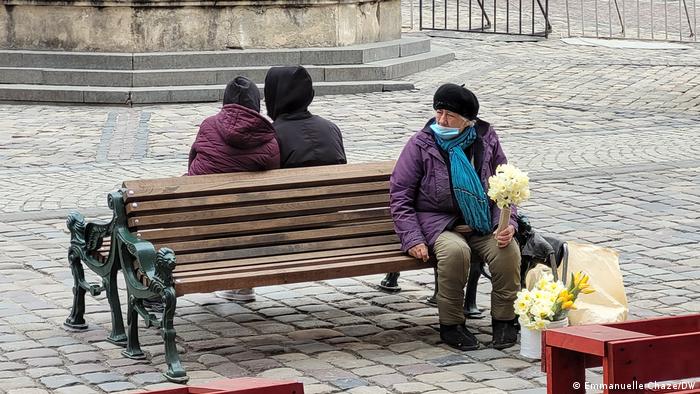 Despite intense fighting in eastern Ukraine, life has been relatively peaceful in Lviv

Supermarket shelves show no sign of having been raided by worried customers, as has been the case in some neighboring countries since the war broke out on February 24. Food is abundant, trees are blossoming and flowers are in bloom.

Yet upon closer inspection this idyllic facade starts to crumble. Passersby appear to be going about their everyday lives as normal, but their faces are etched with concern.

The rare people who seem to wander leisurely through the city stare thoughtfully at its numerous architectural treasures which, surrounded by sandbags, protective metal or wooden panels in case of a Russian offensive, are a reminder that we are in a country at war. Some locals, such as Yuri, believe it's important to keep going.

"During the first two weeks, I was in a state of shock, but after that I returned to a normal life. I feel safe here, and I'm not afraid because I know our armed forces will prevail. Glory to Ukraine!" said the man in his 60s.

This "Slava Ukraini," used by Yuri to punctuate his sentence, embodies what has flourished throughout the city since the war began: an exacerbated patriotism. Ukrainian flags appear here and there, and it's hard to spend more than a few minutes without hearing the national anthem being played on the radio in a shop, car or even in the streets.

Learning to live with a new normal

Since the beginning of Russia's war against Ukraine, the western part of the country has been relatively spared, although not completely left unscathed. On April 18, a series of airstrikes, which Russia has said targeted military facilities, killed seven people and injured at least 11.

Three-year-old Artem was among the injured. His parents had fled pummeled Kharkiv in the east to offer their son a brighter future. But on Monday, sirens announcing airstrikes resonated five times across the city in the space of 24 hours, reminding everyone in Lviv that these were no ordinary times. 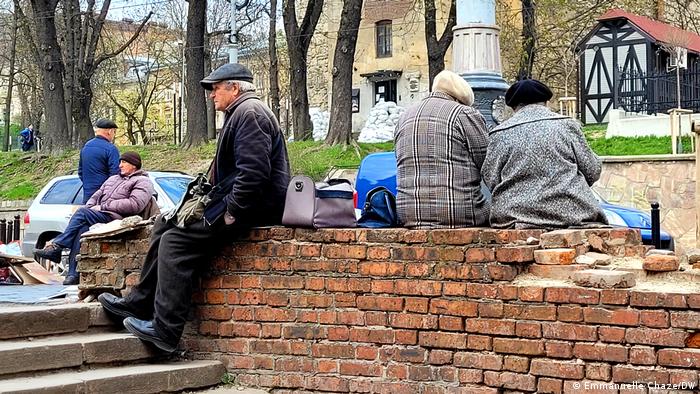 Two months into the war, Lviv residents are now well acquainted with the air raid procedure. In addition to the sirens, a warning app rings to announce a possible imminent strike. When this happens, wherever they are and whatever they are doing, people take shelter underground.

There is no subway in Lviv, but bunkers are plentiful, with the more modern buildings preventively equipped with functional subterranean replicas of the outer world, including chairs, benches and sometimes a kitchen. There is little panic — people simply head underground to the nearest shelter. Some come in groups, others alone. Some happen to be passing by when the alarm goes off, while others live in the building.

All find a way to keep busy for the duration of the alarm, which can last from a few minutes to several hours. If it's nighttime, some bring a sleeping bag, while others carry a thermos and a book. This is a new normal which Ukrainians have grown accustomed to.

Thousands of new arrivals every day

Another witness to the times, a few minutes' drive away from the city center, is Lviv's central train station. The monumental art nouveau building has become the symbol of the plight of Ukrainians escaping the war.

Behind the beautiful, majestic wooden doors that adorn its entrance, the station is now a hub of misery, tears and broken dreams. Here, day and night, crowds of people transit in search of a better life. Since the beginning of the war, women, children and the elderly have been pouring in from the regions hardest hit by the fighting. Every train brings new stories of homes and lives left behind, by people who arrive weakened and shocked by what they have been through.

Lviv, a city of a little over 700,000 inhabitants, has seen a huge population increase since February 24. Hundreds of thousands of refugees have arrived in the city in the nearly two months since the war broke out, with some estimates saying Lviv now has three times as many inhabitants. In total, throughout Ukraine, 7.1 million people have been internally displaced, according to the UN refugee agency. Five million have sought refuge in neighboring countries.

Among the displaced is Vira, an elderly woman. She's in tears, having just arrived from Lyman, in the embattled Donetsk region.

"Two days ago, our village got bombed, and we were forced to leave," she said. "I don't know what else to say apart from: let Ukrainians live! Nobody supports this war. All of our children are hiding in basements all day. There is no light, no internet connection, we don't know what will happen next and what else we should do!"

Vira is among the lucky ones. She will stay with her daughter who lives near Lviv. But many arriving in Lviv are lost, and without any prospects. All of them hope to be able to return home one day. But for locals and displaced persons alike, nowhere in Ukraine feels safe anymore.

Manipulated photos, false statements, state propaganda and deepfake videos are all part of the war between Russia and Ukraine. We debunk some examples and show how to see through the deception.

For the last eight years, Ukrainian giants Shakhtar Donetsk have been homeless, living a nomadic existence in their own country. Since the full-scale Russian invasion, the future of the club from the Donbas is unclear.