Germany's eastern city of Leipzig has long had a hardcore alternative left-wing scene, which staged street protests that turned ugly. Some residents say the media's focus on the violence is obscuring legitimate concerns. 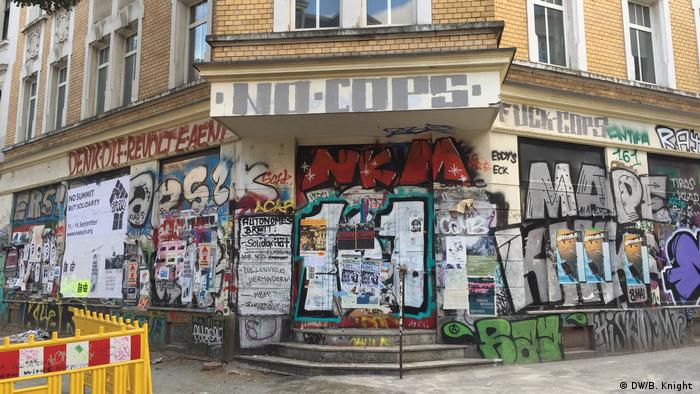 In the days following the latest outbreak of violence the tension was still palpable in Leipzig's Connewitz district. Some residents were still sensitive about media interest in the few graffiti-covered facades overlooking the remains of barricades made of trolleys and mattresses.

"We don't want that here, I don't come round to take pictures of your house either, do I?" an angry resident said.

Some ugly scenes had unfolded at the spot during the previous weekend. This corner of the eastern city of Leipzig, which has a reputation as a haven for the alternative far-left scene, saw a night of violence as an anti-gentrification demonstration escalated when an occupied building was cleared by police in riot gear. This followed a week of protests in other parts of the city that gradually grew from small and peaceful to large and angry.

Read more: Germany is the birthplace of 'Antifa'

There were some alarming scenes – officers were peppered with stones, fireworks were thrown at new buildings, dumpsters were set on fire. Meanwhile, the police kettled protesters and social media showed footage of a police van being driven wildly down Bornaische Strasse before braking suddenly and causing a crash with another police van (the resulting image was used by some papers to illustrate the damage caused by left-wing extremists).

The subsequent Saxony police statement claimed that 1,300 officers had been deployed altogether over the three days, 20 of whom were injured. Some 38 investigations had been launched against "52 known and more unknown suspects" for a list of crimes that included arson, severe bodily harm, and "dangerous intervention in air traffic" (someone allegedly tried to dazzle a police helicopter pilot with a laser). 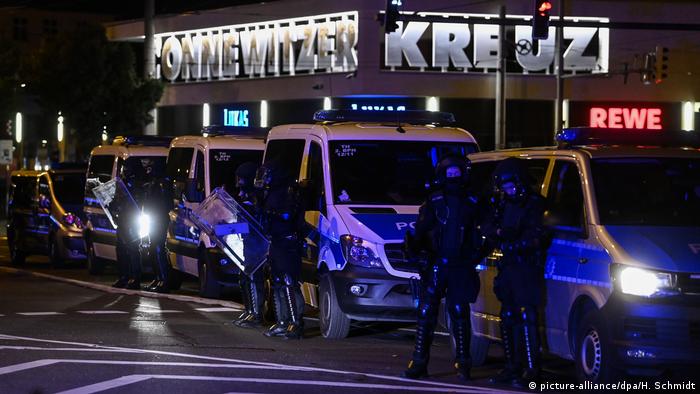 The subsequent attention on the violence was not welcome for some. Leipzigers are wary when reporters swoop onto the city in the aftermath of trouble.

One left-wing politician acidly said that he found it "regrettable" that the media is only interested in Connewitz when "a few garbage cans are set on fire," and argued that the violence was being overplayed in the media.

More accommodating was Juliane Nagel, who represents Connewitz and the surrounding area in the Saxony parliament for the socialist Left party — this was the only constituency in the state where the majority voted Left in the last state election. "The media's concentration on Connewitz is not exactly appropriate," she said, before pointing out that other parts of Leipzig had seen peaceful anti-gentrification demos all week, and other occupied buildings had been cleared by police without violence.

For Nagel and other politicians and activists in the city, knee-jerk attention on a few nights of rioting obscures the real issue: A decline in affordable housing exacerbated by property speculation and resulting in marginalization of the most vulnerable.

"A lot of people, especially in Saxony's two big cities, are affected by these problems," she told DW. "While their rents are rising, their incomes aren't." She described it as "mockery" when conservative politicians like Saxony State Premier Michael Kretschmer dismissed these concerns as they condemned the violence. 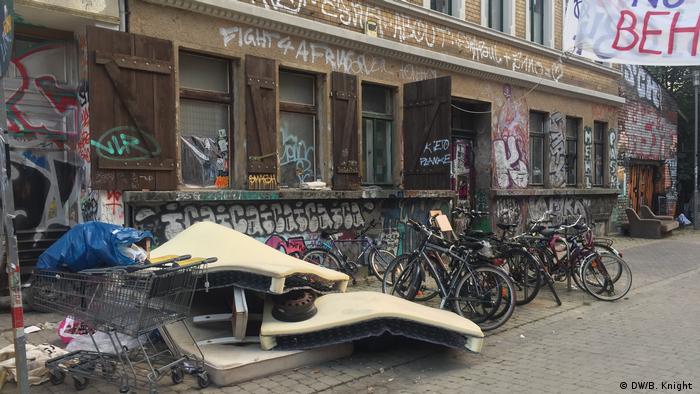 While Nagel thinks the violence is being exaggerated, the city's conservative politicians think the opposite: Left-wing extremists too often get excused and accommodated.

Michael Weickert, Leipzig city councillor for the Christian Democratic Union (CDU) accused Leipzig's Social Democratic Mayor Burkhard Jung of pandering to the anti-fascist anarchist scene to stay in power — even though Jung had joined virtually every other politician in condemning the violence: "Those words just sound hollow," said Weickert, sitting in the CDU's town hall office, before arguing that the mayor had opened the door to such scenes by being too lenient with left-wing activists, leading them to think their extreme behavior is acceptable.

Another CDU councillor, Sabine Heymann, said this tolerance of left-wing violence has been part of Leipzig's politics for 30 years. "This milieu has always been nurtured in order to have a counterpart to the right-wing extremists," she told DW. "From our point-of-view that's not the right answer – just getting two extremists to react against each other and hoping the median of that is the center."

Leipzig, a university city of 600,000 people, has a unique political demographic. Other German cities, notably Hamburg and Berlin, have big, hardcore left-wing scenes, but unlike them, Leipzig is not a city-state, which means Mayor Jung doesn't have as much power over the police force as his center-left colleagues there.

Moreover, in a state where far-right violence is a perennial problem and cases of far-right sympathy in the police are often uncovered, Leipzig's far-left scene often harbors something of a siege mentality. 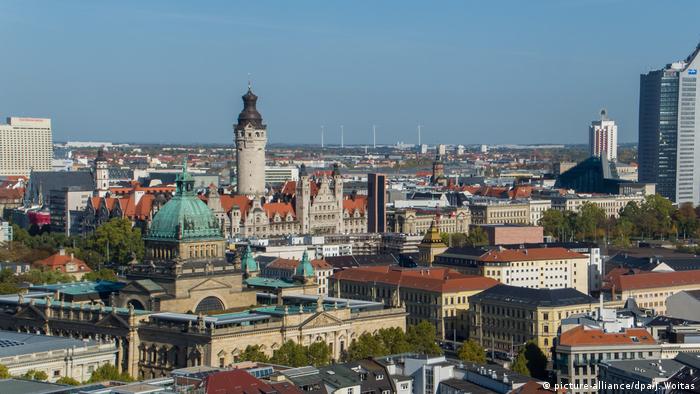 Leipzig is booming, gentrification of previously run-down quarters is one of the consequences

Leipzig belongs to Saxony, a largely conservative state where the authorities have been keener than most to crack down on left-wing radicals.

Leipzig is the only place in Germany where police have established a task force to tackle left-wing extremism – the "SoKo LinX." "For years, Leipzig has been burdened with left-wing-motivated crimes," a Saxony police spokeswoman told DW in a statement. "Regularly and by a significant margin, the most crimes and acts of violence are carried out there."

The task force is currently investigating some 230 crimes. Most of these are arson, property damage, and breaching the peace, but there have been notorious cases of violence too: Last November, a woman who worked for a property developer that was constructing a new building in Connewitz was beaten in her own home by two masked men. The police are treating it as a far-left crime, though some left-wing activists argue that the attack's political motive is far from obvious.

Meanwhile, there's no doubt that rising rents have become a major concern for the people of Leipzig. Some districts of the city have seen a 50% rent hike in the past 10 years, and Connewitz is among the more attractive areas: According to the property portal Immowelt, prices there have seen a 44% rise since 2010. And like many German cities, Leipzig has watched property developers move in and add luxury renovations to old buildings, putting them beyond the means of most people.

Leipzig's average household income has also risen in that time — by about 34%. But not for many young people, old people, and immigrants, as Roman Grabolle of the housing initiative "Leipzig für Alle" (Leipzig for Everyone,) points out.

The Distillery club forced out

One man in Connewitz has watched this story unfold in close-up for the last 25 years. Steffen Kache has been running the district's Distillery club here since the mid-1990s. And he is now facing a familiar threat: His much-loved club, supported by the mayor and by all accounts one of the focal points of Leipzig's cultural scene, is being forced to move because the building's owners have decided they'd like to turn it into luxury apartments. 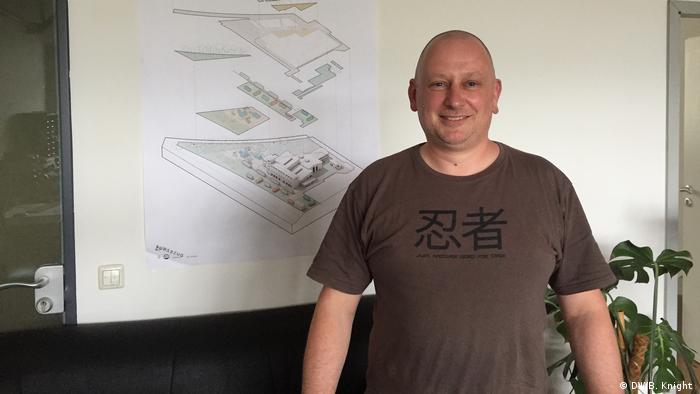 The Distillery began life as a left-wing squat — a disused brewery that Kache and his friends took over when they belonged to a leftist scene that grew in many eastern German cities in the economic downturn that followed reunification.

"It was the only district where there were no Nazis," Kache recalls. "That was the whole point." He can remember a few riots in those days too — most memorably when a local punk was shot by a police officer a couple of months after the Distillery opened. But he adds that the violence was not justified then either.

"We've seen all that before," he says. "My impression was that things had calmed down recently. I don't understand why it should explode like this now. It's just sad, it counteracts all our legitimate demands."

After speaking to his friends in the area, Kache even doubts that the people who made trouble in the last week were from Leipzig at all. "I have lots and lots of friends in Connewitz. Even the alternative people I know who live there, they're not interested in that at all," he said. "That's got nothing to do with being left-wing. That's just violence. Just blind, stupid violence. If you ask me it has a lot to with intelligence."

A Leipzig court has handed down its first sentences following a 2016 right-wing riot in the district of Connewitz. The rampage led to hundreds of thousands of euros in property damage and more than 200 arrests.