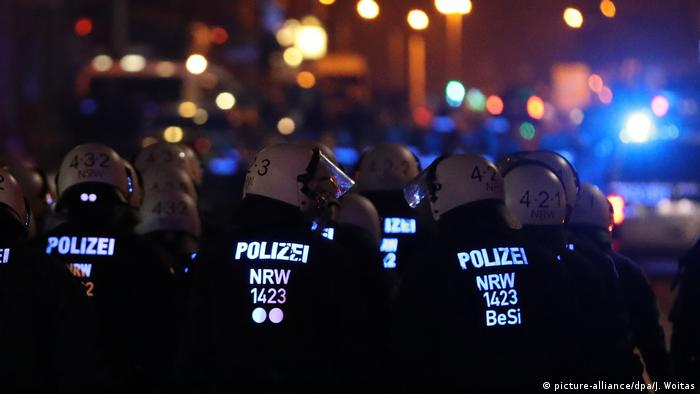 Thirteen police officers sustained minor injuries in the eastern German city of Leipzig on Saturday when protesters pelted them with stones and fireworks during a demonstration against the banning of a leftist website.

Eleven officers were attacked with stones and glass bottles and two sustained injuries from fireworks.

The protest began peacefully in front of the Federal Administrative Courthouse in the largest city in Saxony, where a lawsuit against the ban is due to be heard later this week.

Protesters later moved toward Connewitz, a neighborhood favored by the alternative left scene, where the altercation began, police said.

Demonstrators damaged the windows of several cars and nearby buildings. Journalists on the scene also reported being threatened.

Six people were arrested. The police could not say whether any protesters had been injured.

Around 1,600 people, according to police figures, had gathered for the demonstration in Leipzig to protest a ban of the online leftist platform "linksunten.indymedia.org."  Only 500 had been expected. Leftist groups and online activists had mobilized their followings for the protest.

Germany's Interior Ministry blocked the web platform in 2017, saying the site was the most influential internet forum for violent left-wing extremists in Germany.

Saxony's Interior Minister Roland Wöller on Sunday condemned the violence, saying that those who attack journalists and police officers also attack freedom of opinion and peace within the community.

"We won't allow Leipzig to become a focal point for all violent left-wing extremists in Germany."

A federal court will hear a case against the ban on the website on Wednesday.

Myanmar: Police crack down on protests as workers strike 1h ago