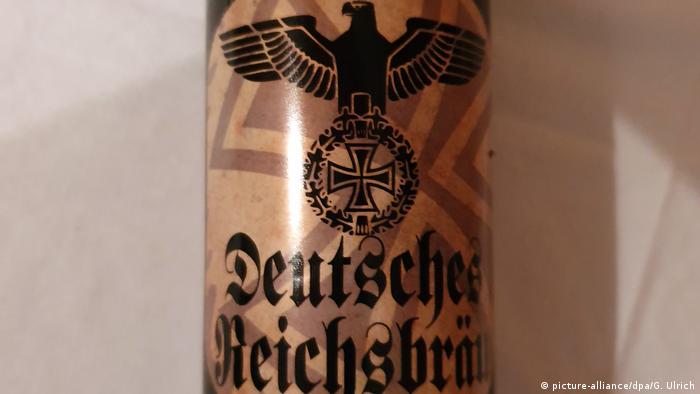 Police in Germany have launched an investigation after beer labeled with Nazi-era German Reich symbols was sold at a drinks retailer in the small town of Bad Bibra, in the eastern state of Saxony-Anhalt.

Despite the investigation, authorities in the neighboring state of Thuringia, where the beer originates, tweeted that neither the "Reich eagle" nor the Iron Cross symbol featured on the label was among the "anti-constitutional" symbols banned in Germany.

The "Deutsches Reichsbräu" ("German Reich Brew") brand belongs to former neo-Nazi politician Tommy Frenck, who launched the beer earlier this year, selling it along with a variety of other right-wing extremist merchandise at his online shop.

Frenck also owns a bar in the town of Kloster Vessra, Thuringia, which, according to local media outlets, frequently hosts neo-Nazi events. In 2014, he stood in the Thuringia state election as a candidate for the extreme-right National Democratic Party (NPD), and is well-known to state intelligence agencies.

The beer was spotted on Thursday by local conservative politician Götz Ulrich, who posted pictures on his Facebook page along with a post that began, "I am so ashamed," before drawing attention to the 75th anniversary of the liberation of Auschwitz being commemorated this week.

"But the worst thing is: The beer did good business and is sold out!" Ulrich added. "It is a devastating sign that so many people aren't ashamed of touching this and don't mind throwing their money at a neo-Nazi," he told the DPA news agency.

There was even some dubious symbolism in the price the beer was advertised at: a case of Deutsches Reichsbräu was being sold for €18.88 ($20.84), numbers that in neo-Nazi circles are code for "Adolf Hitler" and "Heil Hitler" (the numbers corresponding to the initial letters' places in the alphabet). Displaying Nazi symbols is illegal in Germany.

Ulrich told the Tagesspiegel newspaper he bought one of the last bottles to bring to a commemorative event at a concentration camp on Saturday, as a sign of the continuing far-right threat.

The store selling the beer belonged to the franchise chain Getränke-Quelle, which released a statement on Friday distancing itself from the Bad Bibra shop, and discontinuing its partnership with the store.

"The Getränke-Quelle in Bad Bibra is not run by our employees," the statement read. "The local franchisee is independent and he is permitted to sell products without consulting us. Until today we knew nothing about the sale of the beer 'Deutsches Reichsbräu.' We immediately got in contact with the manager and demanded the removal of the article from the store … We will have our branding removed this coming Monday."

Authorities banned a neo-Nazi group that saw itself as "Adolf Hitler's task force" and had links to the murder of a German politician. Police also conducted raids against the group in six states. (23.01.2020)

German police are investigating after video footage circulated showing a Hitler impersonator riding in a sidecar at a biker festival. A police officer seen in the video could also face consequences. (14.01.2020)