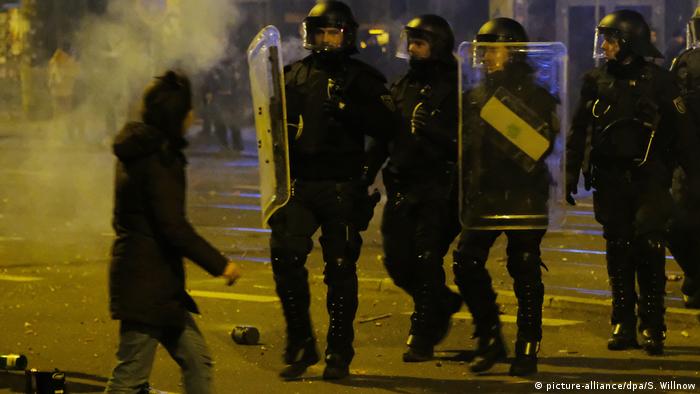 The violence that broke out between police officers and members of the far-left scene in the eastern German city of Leipzig  on New Year's Eve triggered plenty of heated political reaction.

The point was echoed by Leipzig Mayor Burkhard Jung, a Social Democrat who has faced criticism from right-wing parties in the past for failing to crack down on the city's left-wing extremists.

"The New Year, unfortunately, did not begin peacefully at all, but started with a serious criminal outbreak of violence," Jung told dpa. "My thoughts are with the injured policeman and his family, and I wish him a speedy recovery." 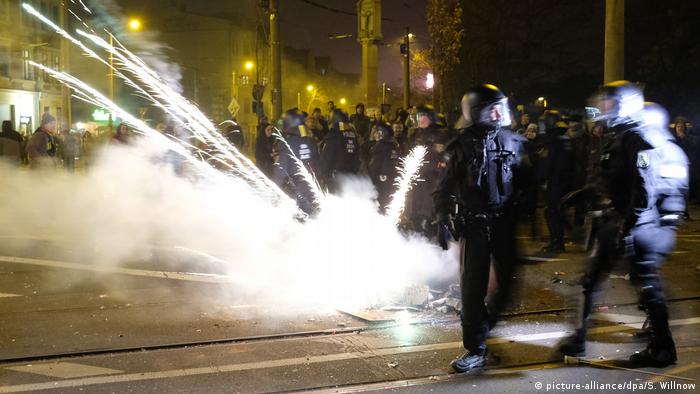 One police officer was seriously injured during the altercations in Leipzig

A 38-year-old police officer had to undergo an emergency operation after being attacked in the city's Connewitz district, known for its left-wing scene. According to the police statement released in the early hours of New Year's Day, a group of people pushed a burning shopping cart into a group of police just after midnight then threw a barrage of fireworks at the officers. A total of 10 people were arrested, with police launching an investigation for attempted murder.

Left-wing politicians blamed police tactics on the outbreak of violence. Juliane Nagel, a socialist Left party representative in the Saxon parliament, who was in Connewitz on New Year's Eve, published a blog post on Wednesday describing how police officers charged the crowds and injured people and criticized the police's public communications ahead of the violence.

Nagel also insisted that none of the police actions justified violence against the authorities. That was a view underlined by Germany's two major police unions.

"There is no justification for someone whose job it is to protect public safety to have fireworks and bottles thrown at them," said Jörg Radek, deputy leader of the GdP police union.

Germany's latest police crime statistics, released in April last year, showed a 40% increase in attacks and resistance against police officers, though this was partly down to the creation of new crime categories. "We have an average we have 32 attacks on police officers per day," Radek told DW, adding that the attacks usually aren't carried out by extremists. "We're talking about someone being asked for their ID, and instead punching the officer." 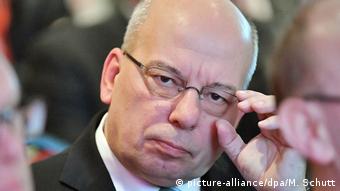 Meanwhile, Rainer Wendt, head of the German police union DPolG, found even stronger words to describe the violence in Leipzig.

"The basic definition of terrorism is spreading fear among the population through violence, and exactly that is happening here," he told DW. "But this is a new quality: a targeted life-threatening attack on officers, and we have to assume, unfortunately, that at some point someone might be killed."

Official statistics suggest in Germany, overall, far-left violence is less of a threat than far-right violence. The Office for the Protection of the Constitution, Germany's domestic intelligence agency, said there are around 9,000 "violence-orientated" left-wing extremists and just over 12,000 right-wing extremists active in Germany.

Saxony, where Leipzig is located, has proved an epicenter for both kinds of extremism, where rival subcultures have developed in many areas. In November, the state government formed a new "Soko LinX," a police special unit focused on left-wing violence, after a series of arson attacks on construction sites and companies in Leipzig. One employee was also physically assaulted.

Wendt was also keen to argue that the left-wing "centers" — often former squats and communes — should be broken up, on the grounds that acts of violence were "planned" there.

"We can only praise Saxony that it has put this phenomenon onto this level," said Wendt. "It is right and important to fight far-right extremism with all means, but that doesn't mean we should disregard the left."

New Year's 2020 around the world: As it happened

People across the globe have not just rung in a new year, but a new decade. Germany has joined the world in welcoming 2020. DW tracked the New Year's festivities live. (31.12.2019)

Two suspects are under investigation after a Jewish cemetery in western Germany was vandalized. The incident comes amid a worrying rise in anti-Semitic incidents in the country. (30.12.2019)