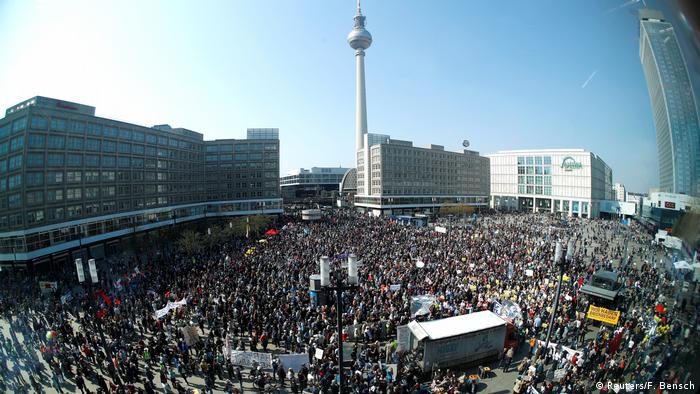 She said the federal government's plans to temporarily freeze rents in Germany were "ineffective."

It is "insufferable that the grand coalition has spent years looking in the other direction as real estate companies push the rents up to offer their investors dream returns while families with normal incomes are forced from the centers of major cities," Wagenknecht said.

Berlin Urban Development Minister Katrin Lompscher, also of the Left, has proposed capping rents on flats built through 2013. Rents would be charged according to type of building rather than location.

"This is exactly what Berlin needs now," Left Party leader Katja Kipping said. "For years, we have experienced how rent sharks have forced tenants from the city centers."

Residents have increasingly taken to the streets to protest predatory housing companies in Berlin (pictured), where the Left shares power in the city-state government with the Greens and Social Democrats. Nevertheless, the city's mayor Michael Müller has distanced himself from his own urban development minister's proposal.

Read more: Berlin tenants fight to save their homes from new buyers

"It is important to me that the renters can be assured of a legal rent cap and that we find solutions through undertakings for the common good so that the task of creating and securing affordable living space can be accomplished," Müller, a Social Democrat, said during a trip to China on Monday.

The Greens have also proved lukewarm to the proposal. The opposition Free Democrats, who espouse a laissez-faire approach to the costs of living, have suggested that they might challenge the constitutionality of a rent cap in Berlin.

Other measures taken by Berlin's city-state government to put an end to the rapidly increasing unaffordability of the nation's capital include a five-year freeze on rental rates adopted in June.