Gentrification battle: Berlin tenants fight to save their homes from new buyers | Germany | News and in-depth reporting from Berlin and beyond | DW | 26.08.2019 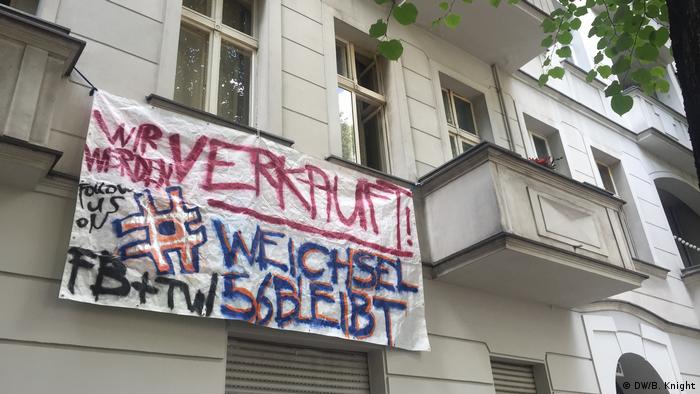 Tenants of a building in Berlin's fast-gentrifying Neukölln district are afraid they could lose their homes after their apartments were bought by new owners who have offered them no guarantees. The case has exposed the weaknesses of Berlin's attempts to slow down the rise of housing costs and protect communities from being broken up and replaced.

The people living in the 26 apartments at Weichselstrasse 56 received letters two months ago telling them that the building was being bought, though they weren't told by whom. In response, they set up a campaign and urged the local council to intervene — either by using its right to pre-emptively buy the building or by persuading the buyers to sign guarantees that the flats won't be sold off. So far, both options have failed.

Many of the 40 or so people who live in the building are dependent on state support, including Ernst Atzert, a retired construction worker who was born in one of its apartments in 1935 and has lived virtually all of his 84 years here. The house represents his family home: at one point four of the apartments were occupied by him and his relatives. He is the only surviving member, and currently pays €676 ($750) rent a month, which he says is well over 50% of his pension.

"I'm scared that I won't be able to pay the rent anymore, and then I'll be on the street," he said to DW. "Where am I supposed to find a flat? I'm alone and at my age, no landlord will give me a place to live. They'll just get someone younger. This is where I was born and grew up. You can't imagine what it's like when you've lived here so long and then you might have to leave." 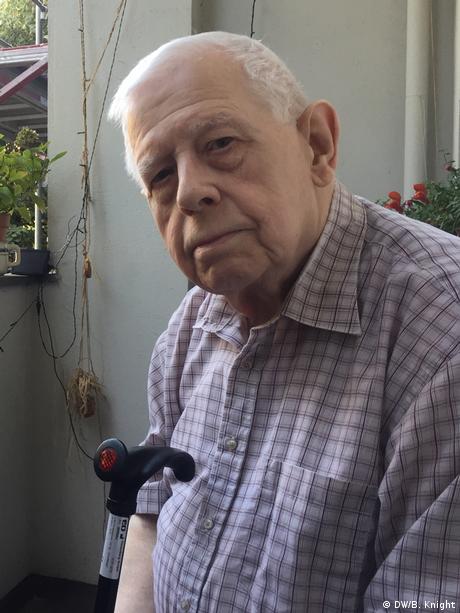 Ernst Atzert was born in the Neukölln building in 1935

Stop the sale or get guarantees

The people of Weichselstrasse 56 eventually found out that the building was being bought by the Waitz brothers, four Hamburg-based lawyers and investment consultants. They did not want to comment to DW, though they have promised to meet the tenants personally once the sale has been finalized.

There is some hope that the people of Weichselstrasse 56 may have got relatively lucky with the Waitz brothers: their father, Hans-Jochen Waitz, is famous in Hamburg for having bought four artists' community buildings in the city in 1989 to save them from property developers.

But the Weichselstrasse initiative is still worried, mainly because buyers have not signed any guarantees. Investors are seeing massive opportunities in Berlin's housing market, and the most lucrative way to make a profit is to renovate and then sell off the flats to people who can afford to buy rather than rent.

Berlin councils have two ways to prevent this, if, as in this case, the flat is in a so-called Milieuschutzgebiet, a designated "protected community": Either they can persuade the buyers to sign a so-called Abwendungsvereinbarung ("aversion agreement"), or take the more drastic option of finding someone else, usually a state-owned company, to buy the property pre-emptively.

In practice, the council has to jump fairly high hurdles to use this right, having to prove that the preemptive sale is in the public good.

In the case of Weichselstrasse 56, the deadline to make use of that right passes on August 27. But the local authority has already admitted that the building is too expensive for state-owned companies to buy. The price hasn't been made public, but the tenants have calculated that it would have cost between €5 - €7 million ($5.5 - $7.6 million). Two or three-room apartments in that area of Neukölln are currently on sale for €500,000 and more.

According to one council official, the price of buildings in Neukölln can often be 30-40 times what investors can expect to make from rent in a year. "Put it this way: it's not worth buying a building like that unless you want to raise rents or get your investment back another way," Neukölln district official Christopher Dathe told DW.

And for the state to buy the property is also not easy. "At the end of the day, there are still economic decisions to be made: how high are the rents, how high is the price, how much money do we think we will have to invest for maintenance over the next 20 years?" said Jochen Biedermann, Neukölln's Green party councillor for town development.

But the second option has also failed, because the buyers have refused to sign the aversion agreement, so they will effectively be free to do what they like with the property, though they will be bound by some rules as the building is in a protected location: for seven years, they will only be able to sell to the tenants. "Unfortunately there are cases — not very many, but there are some — where neither the one or the other is possible," Biedermann told DW.

This leaves the tenants, many of whom are dependent on social support, fearing eviction as the new owners raise rents or decide to put the apartments up for sale.

The story of Weichselstrasse 56 is becoming a typical one in Berlin, and several tenants' initiatives have sprung up, banding together to appeal to the local district to intervene.

Aversion agreements have successfully been used by local authorities before, though their contents are kept secret; even when tenants were allowed to see them in the past, they were forbidden from making copies. This too often leaves tenants at a disadvantage, since they have no way of checking whether owners are sticking to the conditions to which they have signed up.

At least that was the case until last week, when the Paul-Robeson-Strasse 17 (PR17) initiative successfully used a Freedom of Information Act request to obtain such an agreement. The published agreement showed that the buyer of Paul-Robeson-Strasse (whose name was redacted) agreed not to sell the apartments for 30 years.

Germany's housing shortage is creating more of these situations in Germany. "More than anything we need better regulations at national level," he said. "We need a proper rent cap, a real ban on transforming property into individual owned flats. I really hope the state of Berlin finds a way to additional protection for renters."

Residents of Thiemannstrasse, in the German capital's Neukölln district, are concerned their homes will be turned into luxury apartments. Europe's fifth-largest pension fund has been on a spending spree in Germany. (08.12.2018)

The US tech giant has planned several hundred new jobs for the new office. Locals have rejected Google's previous plans for a start-up campus over concerns for their rent and livelihoods. (02.06.2019)

Berlin squatters take over series of buildings to protest gentrification

As Berlin grapples with rising property prices, scores of squatters have taken over several residential buildings. In response, the owner of one empty building was willing to grant them a lease — with certain conditions. (21.05.2018)