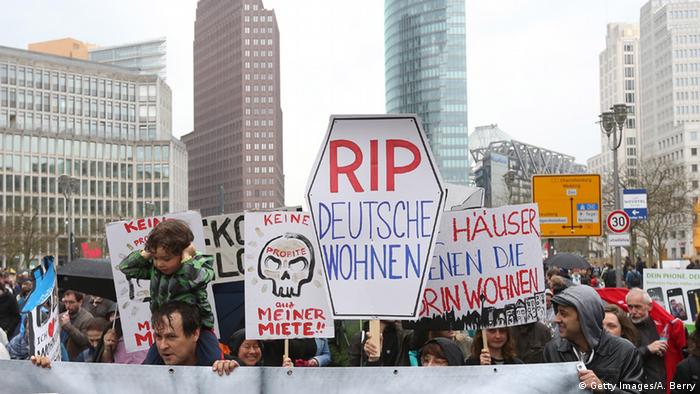 Some 140 flats — some of which lie in the neighboring Böhmische Strasse — were purchased by PFA in the summer from the Frankfurt-based Industria Wohnen, as part of a €1.2 billion ($1.36 billion) property deal.

However, tenants, many of them pensioners, were only informed of the change of ownership last month. Several of them now fear that the pension fund will try to recoup its investment by demanding higher rents, or that the reasonably-priced flats will be turned into luxury apartments as part of the ongoing gentrification of the area.

Seventy-two-year-old Edeltraud Wude, who has lived in Thiemannstrasse since 2011, told the Morgenpost  she couldn't afford to pay a higher rent. She currently pays less than €550 ($625) a month for a 50-square-meter apartment. "If it gets more expensive, I'll hang myself," she threatened.

Lifetime tenant, 79-year-old Jürgen Lehmann, lamented that he'd "never find another home like this one."

Social Democrat MP Cansel Kiziltepe is also concerned about PFA's plans: "They want to make profits. Denmark itself has ringfenced its housing market," she told the Berlin-based tabloid BZ.

Local politicians now hope to win a legal challenge that could allow a local housing association to secure the properties.

Both streets belong to a local protection area that forbids the conversion of leased flats into condominiums. However, local authorities have increasingly approved conversions from rented to owner-occupied apartments, the Morgenpost reported.

In the year to May, 14,053 Berlin apartments have had their use converted, the paper added.

Amid intense rivalry in the grocery business, Aldi Nord says it wants to put apartments above some of its supermarkets. Real estate in the German capital is at peak demand, amid high immigration and a lack of new homes. (01.02.2018)