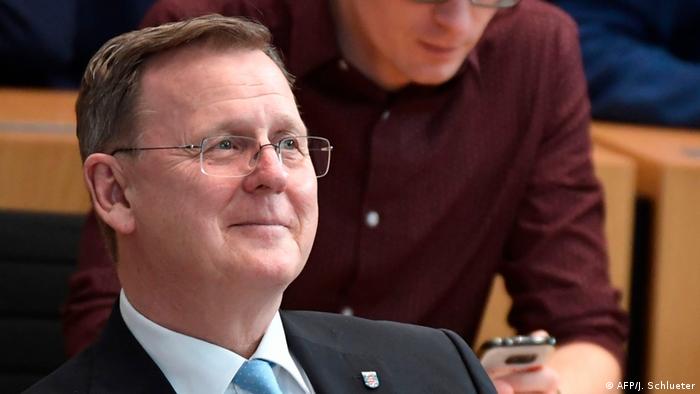 Ramelow failed to gain a majority in the first two rounds of voting in a divided state with no clear ruling majority coalition. However, the state's constitution dictates that if a third round is neccessary, whoever garners the most votes wins.

Asked if he accepted the result, Ramelow nodded and said merely, "yes."

In his acceptance speech, Ramelow said he would have preferred "if Thuringia had not become internationally famous this way."

Ramelow said that he would promote a Thuringia that was a welcoming place to live for people of all backgrounds. He also rejected the idea that the former East is backwards and separate from the rest of Germany.

The Left party leader ran essentially unopposed in the third round, after controversial AfD lawmaker Björn Höcke withdrew from the race once his defeat had become a certainty. The first and second rounds of voting ended without a winner, but Ramelow did not stick to his threat to withdraw from the race if he wasn't elected outright — leaving Höcke with no chance of victory.

Ramelow refused to shake Höcke's hand after the vote.

Thuringia held its state elections in November, in which the Left party garnered the most votes at 31% support but had to spend the next several months trying to form a coalition. The Left had just inked a deal with the center-right Social Democrats (SPD) and Green parties in early February when the first vote for state premier took place.

It had been expected that the incumbent Ramelow, the first Left party state leader in Germany, would narrowly win re-election. However, fringe candidate Thomas Kemmerich emerged as a surprise winner in the third round of voting when members of the Alternative for Germany (AfD) surprisingly eschewed their own candidate and threw their support behind him instead. This left Kemmerich with a surprise majority, rather than Ramelow winning with just a plurality of votes, as expected beforehand.

Kemmerich is a member of the free market-liberal Free Democrats (FDP), whose party had barely cleared the 5% hurdle to enter Thuringia's parliament.

Kemmerich's election sent shockwaves across Germany, being the first time since World War II that a state premier had been elected expressly with the help of the far-right. Angela Merkel slammed the Thuringia branch of her party, as the CDU expressly rejects any form of cooperation with the AfD.

The scandal also saw CDU leader Annegret Kramp-Karrenbauer, who had been seen as Merkel's hand-picked successor, forced to step down as party chief — scuttling her ambitions to fight for the chancellorship next year. Kemmerich himself offered his resignation barely a day after the election, but has been caretaker state premier since the vote.

Ahead of Wednesday's vote, the outcome had been anything but clear as the state CDU said it would abstain from voting and the FDP refused to support the Left party. There was also added furor over the AfD putting forward state party spokesman Björn Höcke, a politician known in Germany for a series of xenophobic and anti-Semitic scandals.

Part of the negotiations to end the political crisis is an agreement to pull the next state elections forward considerably once the new parliamentary session begins, to April of next year as opposed to 2024.