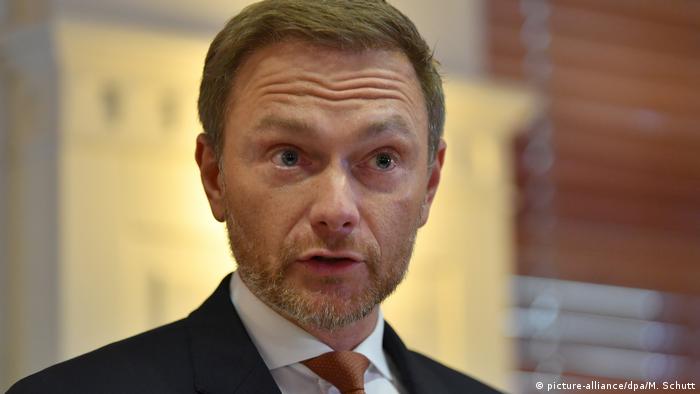 A special session in Germany's national parliament in Berlin over the controversial election of a state premier with far-right backing was met with accusations, heckles, and an official apology on Thursday.

Germany's Free Democratic Party (FDP) chairman Christian Lindner apologized on behalf of his party during debates in the German parliament over the shock election in the eastern state's parliament, in which the right-wing populist Alternative for Germany (AfD) threw its support behind an FDP candidate at the last moment, swinging the vote in his favor.

The FDP politician Thomas Kemmerich was elected to the post last week, but resigned within 25 hours after an immense outcry. All Germany's major parties refuse to work with the AfD, but the party saw an opportunity to influence a key outcome nonetheless because in the case of Thuringia's divided parliament, no natural coalition allies command enough seats to set up a stable majority.

"We are ashamed that we have allowed the AfD to mock parliamentary democracy," said Lindner, after the FDP faced criticism for having fielded a candidate at all for the post, giving the AfD scope to support him and skew the vote.

"We made a mistake that we are working on," he said, adding that there should be no cooperation with the AfD. "Erfurt was a mistake, but we are doing everything we can to prevent it form happening again," he said, citing the creation of a working group to further analyze what happened.

The Left Party complained that the CDU and FDP had approved the election of Kemmerich with the AfD's support; the candidate had a brief moment — immediately after the vote count — when he could have refused to take up the office. However, he meekly nodded while struggling to say very much at all, which was taken as consent.

The leader of the Left Party, Amira Mohamed Ali said that the event was "No accident," and that the "FDP and CDU knew what could happen" when they both elected to support Kemmerich.

Greens leader Katrin Göring-Eckardt also slammed the AfD, saying "They don't love this country. They want to burn it down, and that is why the Democrats are standing here together."

Meanwhile, the AfD described it as undemocratic that Kemmerich had to resign, following an appeal from Angela Merkel for the results to be undone. Party leader Alexander Gauland called Kemmerich's election "the most natural and democratic thing in the world," for a democratic member of parliament to be elected to the role, akin to that of a governor, by his elected peers in the parliament. What was not normal, however, is for the results of that election to be reversed, he argued.

CDU Secretary-General Paul Ziemiak, however, rejected suggestions that the simplest solution would have been for the CDU to support the socialist candidate and incumbent Ramelow in the vote, providing him a majority. The Christian Democrats have a blanket ban on cooperating with either the AfD or the Left, and Ziemiak said this would stand. Ramelow, "like every other candidate of the Left," could not count on CDU support, he said.

The event comes at a time of political uncertainty for Germany's ruling Christian Democratic  (CDU) party, and spurred the resignation of the party leader, Annagret Kramp-Karrenbauer, who was favorite to succeed Merkel as chancellor until last week's tumult.