As poverty soars in Lebanon, demonstrators defied the coronavirus lockdown to protest the corruption and mismanagement that has shattered the economy. What hope is there that the government can deliver real reform?

Beirut is not asking for a "blank check" in its appeals for international financial aid, said the Lebanese foreign minister.

In an interview with DW's Conflict Zone, Nassif Hitti told host Tim Sebastian: "We are telling the international community, 'look at us and let's see if we succeed.' We are planning to succeed. We are committed to success because we have to save our country."

Lebanon has been gripped by huge anti-government rallies that began last October after a proposed levy on internet calls and a hike in value-added tax. By late January of this year, the government had been replaced by a smaller team of fresh, but inexperienced, ministers.

But critics say the differences are only cosmetic and that many of the ministers are still loyal to powerful factional leaders behind the scenes.

In defiance of lockdown measures to combat the coronavirus, demonstrations have continued, with protesters demanding political and economic reform in a country beset by endemic corruption and sectarian power.

Foreign Minister Hitti said he recognized the scale of the challenge and that fundamental reform was the only way to "create a rupture with the past."

With rising unemployment, poverty, and food prices, those reforms are critical.

In a recent article in the Washington Post, Lebanese Prime Minister Hassan Diab blamed the country's parlous state in part on "decades-long political mismanagement and corruption."

As the global economy, too, reels from the effects of the coronavirus pandemic, DW's Tim Sebastian asked Foreign Minister Hitti why the international community should hand Beirut huge sums of money only for it to repeat the mistakes of the past. 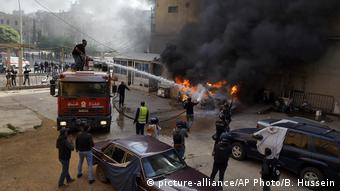 In late April, a protestor was killed and dozens injured in riots sparked by a currency crash that slashed the value of wages and savings

"First and foremost, because we're not going to do what happened before," Hitti said.

"From day one, when we started working in this government, our plan is clear: It is to fight corruption, to go for structural reform, underlying structural reform. It's not minor reforms. It's basic reforms."

Beirut has now begun formal negotiations with the International Monetary Fund (IMF) to agree a financial rescue package worth around $10 billion.

Since the end of its civil war in 1990, Lebanon has received hundreds of millions of dollars in aid packages from the international community, but failed to tackle its systemic problems.

Did the foreign minister think that the controlling warlords and powerbrokers in Lebanon were going to give back the billions that had been looted from the country? 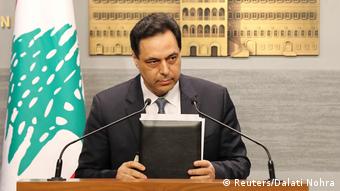 Prime Minister Diab has blamed the governer of the central bank for currency woes, saying the bank "is either incapable, absent or directly inciting this dramatic depreciation"

The response to that challenge by Lebanon's government and officials has already been factional: The prime minister and the governor of the central bank have feuded publicly, undermining efforts to secure a rescue package.

Hitti played down the division: "Well, there were some differences, of course, but now we're working out in harmony, developing a position represented by the government."

In November last year, Human Rights Watch said there had been an "alarming increase" of attacks on free speech in Lebanon in recent years.

"Powerful political and religious national figures have instrumentalized the country's criminal defamation and insult laws to silence nonviolent criticism, especially against those leveling accusations of misconduct or corruption," said the HRW report.

Targets for prosecution under these laws have included journalists and activists, as well as citizens.

DW's Tim Sebastian asked if cracking down on free expression was how the Lebanese government was meeting the people's aspirations. Foreign Minister Hitti said this charge was a "generalization" and the government were committed to correcting any such cases.

"If certain acts which are unacceptable were committed – unacceptable according to our laws – we condemn these acts and we did that many times."

Lebanon is ranked 102 from 180 countries in the 2020 World Press Freedom Index, according to Reporters Without Borders.

The Lebanese government has been able to contain the virus so far. Most of all, the strict protection measures affect people living in extreme poverty, and refugees. Their livelihoods and health are at stake. (28.04.2020)