Longstanding uprisings that have brought down leaders from Lebanon to Iraq have largely left the streets as COVID-19 stifles public life. But that hasn't stopped protesters from pursuing political change. From North Africa to the Middle East, several Arab countries have witnessed mass protest movements bring down longstanding political leaders over the past year.

In Sudan, the protests have given way to various political reforms, but little has changed in Iraq, Lebanon and Algeria, where until recently protesters remained on the streets calling for change. Protesters in those countries have largely been driven away from public spaces due to fears of contracting the novel coronavirus — and as a result of government measures to curb the outbreak.

Read more:  Lebanon: From the penthouse to the outhouse

Lebanese authorities implemented restrictions on public life in late March, including a curfew aimed at preventing large gatherings. They demolished the main protest camp at Martyrs' Square in Beirut, clearing out a core group of about 60 protesters. The camp had served as a hub for the protest movement's political action.

It only took two days before small demonstrations surfaced in the suburbs of Lebanese cities in defiance of the coronavirus lockdown.

In Beirut, protesters flouted the curfew, yelling "We want to eat, we want to live." In Tripoli, Lebanon's second-largest city, protesters took to the streets in cars and scooters, shouting: "Dying from the coronavirus is better than starving to death."

For many activists across the region, giving way to the pandemic isn't an option.

In Iraq, more than 770 people have contracted the virus, including at least 54 who have died due to complications caused by the disease. Authorities have enacted a nationwide lockdown as part of containment measures to slow the spread of COVID-19.

As a result, protest camps have thinned out across the country. The few protesters that remain maintain a rotating presence for fear that if they fully leave, it would spell the end of the movement. They've even developed their own measures to fight the coronavirus within the camps.

"If we leave Tahrir Square, the snipers and security forces will take over and the movement will end," said Alqasem Ahmed, a young Baghdad journalist who has helped articulate protesters' demands.

Since October, more than 600 people have been killed, many of them during clashes with government forces. Before the pandemic, the Iraqi government had struggled to contain the widespread demonstrations against corruption, lack of access to basic services and the country's sectarian political system.

"We have survived death, bullets and teargas for six months, so we can wait another six months until corona ends," Ahmed said. 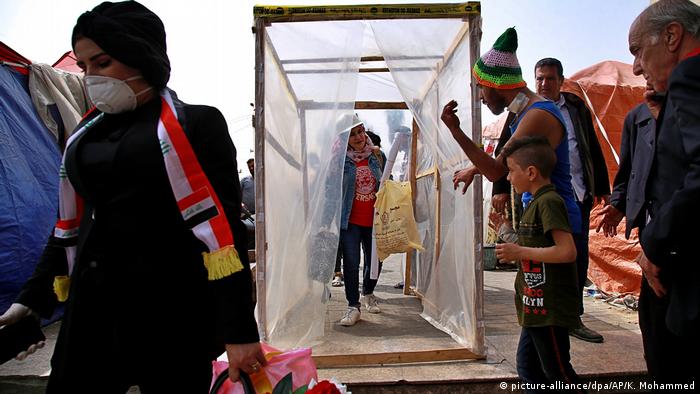 With Iraq's public healthcare system strained by decades of sanctions and underfunding, the coronavirus is only further fueling grievances. With record-low oil prices triggered by the global pandemic straining Baghdad's ability to pay its massive public sector, Iraqis face an even more uncertain future.

"These problems will make people go out to the streets in bigger numbers than ever before," said Ahmed. "Before, society was divided between those who supported the protests and those who stayed home, but soon they will see why we are protesting and join us."

'Taking advantage of the epidemic'

In Algeria, the pandemic has also taken its toll on the protest movement. Authorities appear to have instrumentalized coronavirus-related restrictions to deliberately silence internal dissent.

Last year, mass demonstrations against corruption and the ruling elite led to the ouster of longstanding ruler Abdelaziz Bouteflika and a subsequent presidential election, which was marred by irregularities. Despite the government's political concessions to protesters' demands, demonstrations were still staged every Friday until last month. 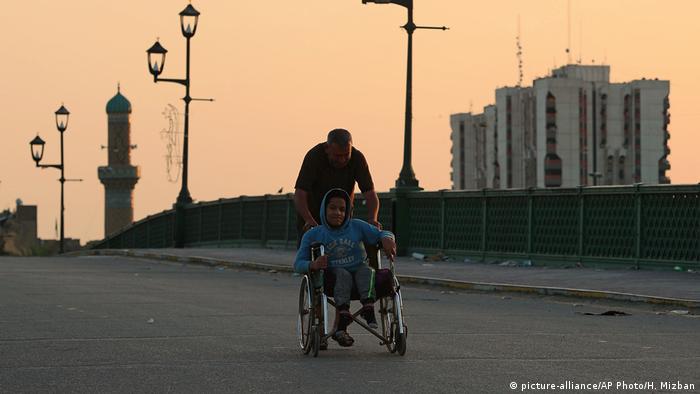 Iraq, like many other countries, has enforced a curfew to help fight the spread of the coronavirus

RSF and other press freedom groups said they "regret that the Algerian authorities are taking advantage of the coronavirus epidemic to settle scores with independent journalism."

But the arrests haven't stopped the movement. In a video featuring prominent Algerian activists about the novel coronavirus, one figure raised a placard that read: "Protect yourself so that the revolution has a future."

"To be free, you have to live," said another activist.

Activists say Iraq's political system is the real virus, without an apparent cure. Political deadlock, violent repression and decades of corruption all outweigh fears of a transfer of the coronavirus from Iran. (04.03.2020)