Activists say Iraq's political system is the real virus, without an apparent cure. Political deadlock, violent repression and decades of corruption all outweigh fears of a transfer of the coronavirus from Iran. 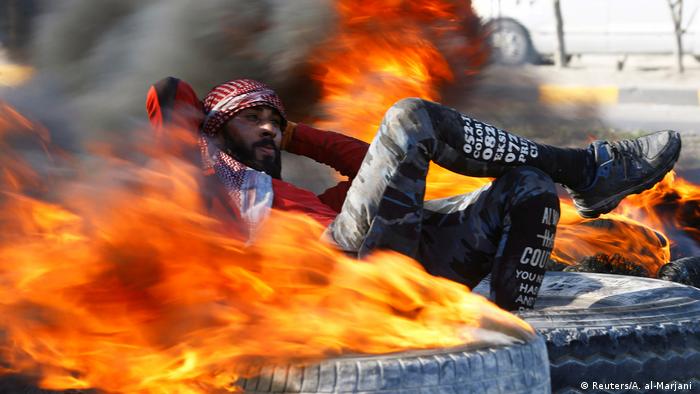 As Iraqi authorities reported at least 31 cases of COVID-19 on Wednesday (earlier reports of a corona-related death could not be confirmed) — all traced to Iran — the deepening political crisis is complicating efforts to tackle the virus in a country that is already particularly vulnerable. Demonstrations that have already seen more than 600 people killed by thugs and security forces, according to the Iraqi Commission for Human Rights, entered their sixth month on Sunday.

A week after health authorities banned public gatherings in an effort to contain the virus, protesters in Baghdad refused to leave Tahrir Square. "We see [COVID-19] as a small threat when we are being killed with guns and live bullets. We have been facing death, poverty and corruption since 2003. This is the real virus and I don't think we will find a cure," activist and journalist Alqasem Ahmed said.

Despite determined efforts to contain the outbreak, Iraq's health system has been undermined by decades of sanctions, neglect and corruption and protest camps are exposed.

Although Iraqi health authorities have been taking the threat of COVID-19 seriously, shortages in supplies, equipment and staff and decades of sanctions and corruption have left the medical system in a "shambles" and are exacerbating the threat, said Omar al-Dewachi, a former doctor in Iraq, who now specializes in the medical anthropology of the country at Rutgers University in the US.

Officials have banned public gatherings, suspended work at some government ministries and ordered schools and restaurants in major cities to close.

World Health Organization (WHO) representative Adnan Nawar said the Health Ministry has been working "shoulder-to-shoulder" with the United Nations health agency, providing detection kits and advice, while hospitals have been equipped with isolation rooms. 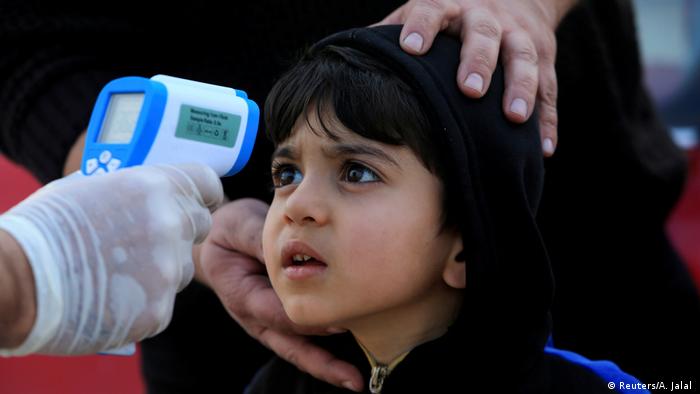 But a recent Reuters report found that after years of war, UN sanctions and corruption, the medical system in general is suffering a crisis of neglect, with doctors fleeing in their thousands, a shortage of drugs and an allocated health budget of only 2.5% of the state's $106.5 billion (€95.8 billion) revenue.

Activist Alqasem Ahmed said one suspected case had been turned away from two hospitals in Baghdad and a pharmacist in the city said people are worried about the Health Ministry's ability to effectively counter the coronavirus crisis.

Wamith Kassab said prices for masks and hand sanitizer were rising and hospitals in some places are lacking gloves and other preventative equipment. Added to that, many people aren't observing basic advice issued by the government based on hand-washing and minimizing physical contact, Kassab said.

'Shut the borders with Iran' 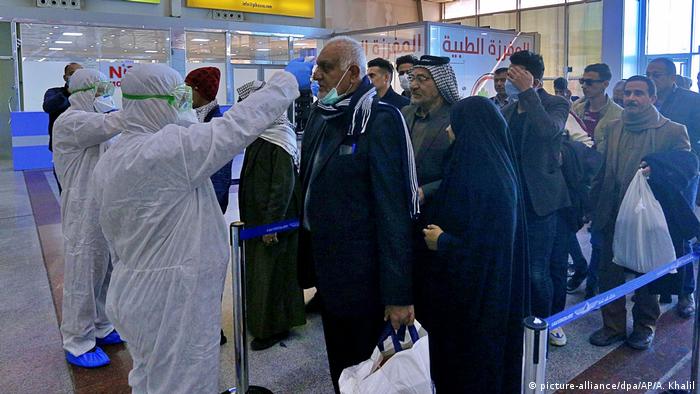 In a bid to stop the spread, Iraqi authorities have closed a number of land crossings with Iran

At the same time, Iraq's close social, economic and political ties with Iran leave the country at a heightened risk. Iran currently has the world's highest number of deaths (124) from the virus outside China but the comparatively low number of reported cases in the country has raised questions about the extent to which information on the crisis is being withheld.

Iraqi authorities said they had closed the border with Iran and barred Iranians from entering before any Iraqi cases had been reported. Iraqis arriving from Iran by land are also required to undergo a mandatory two-week quarantine, according to the United Nations Office for the Coordination of Humanitarian Affairs (OCHA).

But there have been conflicting reports about whether crossings between the two countries have been fully closed. The Iranian ambassador to Baghdad initially denied the border was closed on February 20 and OCHA reported some people were attempting to be smuggled across.

Analysts have highlighted how the close interdependence between the two countries will make containing the spread from Iran difficult. Sajad Jiyad from the Baghdad-based al-Bayan Center tweeted that an extended ban on Iranian arrivals would cause serious economic problems.

Many political factions in Iraq also share close ties with Iran, something that has consistently raised the ire of protesters who resent what they see as a powerful Iranian influence in their country.

"I'm not really convinced that they are closing these borders correctly or doing the proper procedures," Dewachi, the medical anthropologist said. "Iraq is highly vulnerable because Iran is linked to these corrupt parties and it will not allow the government to actually close the border and try to contain the movement of people."

Local media reported protesters had blocked the road leading to one crossing in Diyala province last week for fear of the coronavirus spreading and a hashtag that translates as "Shut the borders with Iran" has trended on Twitter, demonstrating protesters' distrust of government assurances.

As business owners in Baghdad ignore the directive to close cafes, clubs and malls and activists remain camped out, Iraqis' livelihoods, security and political freedoms have trumped concerns of a severe outbreak.

Protesters who camp together in close quarters may be relatively more vulnerable but have adapted their own medical stations to distribute hygiene products and advice, even as they tend to injuries sustained under tear gas and live fire during demonstrations.

Having recently visited a protest camp, Dewachi said "One of the deepest moments I had was when I heard two guys saying, 'Well, you can die this way or you can die that way.' They were referring to how in Iraq you are constantly confronting death."

"Liberating yourself from all this political and social repression, which is a form of death, compared to staying at home, being silent and dying from something else, you might as well choose the better death," Dewachi said. "I think [the] coronavirus is just another episode in what people are facing there."

Coronavirus: Iran calls on army for help as 23 MPs infected

Iran has confirmed its armed forces are available to assist health officials. European governments are hurrying to control the spread of COVID-19 as Italy's death toll jumped to 79 (03.03.2020)