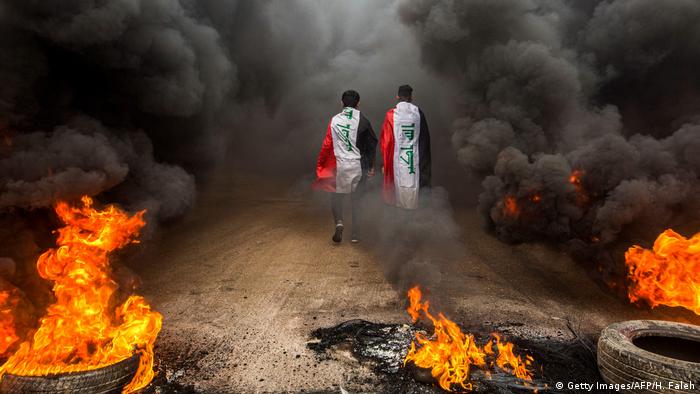 The political order imposed on Iraq by the US-led international community, in the wake of dictator Saddam Hussein's ouster in 2003, has failed. The idea was to distribute public sector jobs among different religious and ethnic groups, using Lebanon as a model to create balance and stability. The hope was to heal the wounds inflicted by Saddam Hussein's dictatorship.

It is no coincidence that in recent weeks, in both Lebanon and Iraq, young people have risen up against the system and are calling for a new political order. In both countries, the protesters want modern nation-states modeled on the West, in which all citizens are considered equal and in which religion and ethnicity play no role. They want an end to sectarianism. They also want governments that answer to the population — and do not plunder the state.

Rainer Hermann is a political editor with Frankfurter Allgemeine Zeitung

Until now the sectarian system has enabled Iraq's political class to enrich itself. Meanwhile, half of the population is unemployed and many live on the poverty line in a country that has vast oil riches. The protesters are demonstrating against the kleptocracy, against nepotism and the failure of the state. They say they will not budge until there is change because even though the government promised reforms last autumn — nothing happened.

The political class is probably not more prepared this time around to really introduce groundbreaking reforms. However, Prime Minister Adel Abdul-Mahdi's resignation, which came a day after dozens of unarmed protesters were shot dead, is an indication of compromise. It could just be for show, though. Like in Egypt, reforms that just bring about cosmetic changes might be introduced but nothing significant. The political class could then go on to crack down on those who continue to protest by saying that they are being manipulated from abroad and fomenting a coup.

The Shia clergy is also in turmoil. Young people do not feel represented by Grand Ayatollah Ali al-Sistani and other ayatollahs, whose calls for solidarity have fallen on deaf ears. The intra-Shiite conflict between majority-Shia states Iraq and Iran is likely to increase — and the biggest loser will be Iran. If it loses influence in Iraq, it will no longer be a regional hegemon.

Protesters have stormed the Iranian consulate in the Iraqi city of Najaf and set fire to the entire building, authorities said. Police reportedly fired live rounds into the crowd but failed to prevent the breach. (27.11.2019)

Germany calls for removal of foreign fighters from Libya 5h ago