Protesters have stormed the Iranian consulate in the Iraqi city of Najaf and set fire to the entire building, authorities said. Police reportedly fired live rounds into the crowd but failed to prevent the breach. 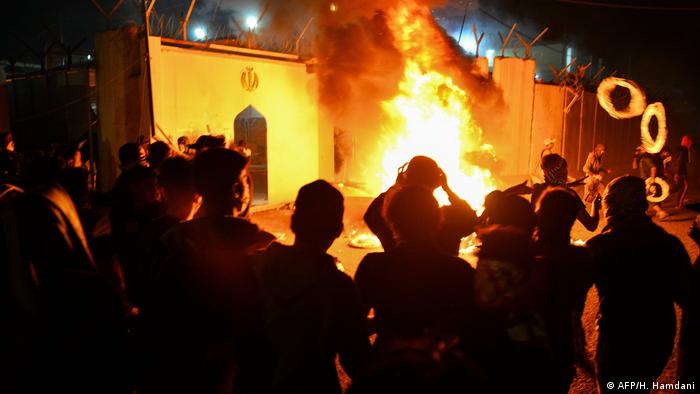 Iraqi authorities declared a curfew in the holy city of Najaf after a group of protesters breached the Iranian consulate and started a fire on Wednesday evening.

Protesters chanted "victory to Iraq" and "Iran out" as they managed to enter the compound and replace the Iranian flag with an Iraqi one.

Consulate staff in the southern Iraqi city had evacuated before the breach, police and civil defense sources said. However, the AP news agency cited a police official as saying that one person was killed and at least 35 wounded when security forces fired live rounds into the crowd.

Iran's foreign ministry blamed the Iraqi government for failing to protect its diplomatic mission and "demanded decisive, effective and responsible action... against destructive agents and aggressors."

Protesters are frustrated by a range of issues, including widespread corruption and a lack of jobs, but they also accuse the government of being under the influence of foreign powers, particularly Iran. Tehran-backed parties are the dominant force in the Iraqi parliament.

Earlier this month, Iran's consulate in the Shiite holy city of Karbala was targeted by protesters. Security forces defending the site shot four demonstrators dead at the time.

In Baghdad, protesters were occupying three central bridges, Jumhuriya, Ahrar and Sinar. Major roads have also been blocked in various parts of the country.

Picketers also sealed off the entrance to the Nasiriyah oilfield, a contributor to Iraq's exports of some 3.6 million barrels per day. Basra's offshore terminals fund more than 90% of the government's budget.

"It's been 16 years that we've been living in chaos and corruption," one protester told AFP news agency on Wednesday. "Basra should have been a wealthy city, but instead it's a trash dump."

Meanwhile, the "Islamic State" (IS) militant group claimed it was behind three deadly explosions in Baghdad on Tuesday. At least six people were killed in the attacks.

Iraq declared victory over the group in 2017, but it continues to be active in parts of the country.

In an apparent concession to protesters last month, a governmental anti-corruption body, the Higher Council for Corruption Combat, ordered the dismissal of 1,000 employees at state institutions who had been convicted of wasting or embezzling public money, according to the official INA news agency.

Iraqi Prime Minister Adel Abdul-Mahdi also pledged to try and pass a law granting a basic income to poor families, while admitting that there was no "magic solution" to the graft and poor governance rampant in the country.

According to the World Bank, the country has a youth unemployment rate of about 25%. Iraq is ranked as the 12th most corrupt country in the world by Transparency International.

Abdul-Mahdi's government, which has been in office for a year, has failed to bring stability and order to the war-ravaged country as it grapples with the problems posed by an ongoing terrorist campaign by the extremist IS group.

"The government has lost all its legitimacy. We don't want them," said one protester in Basra.