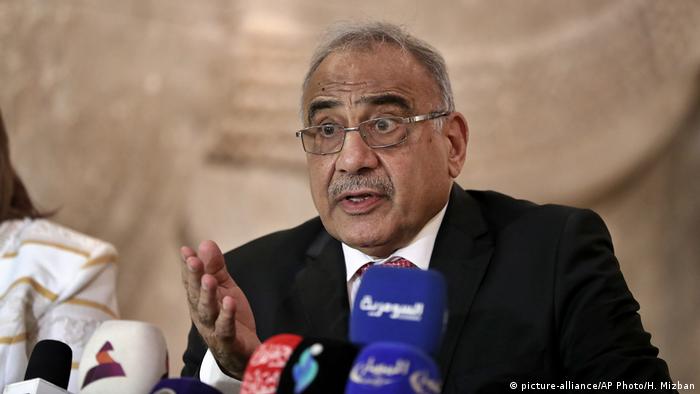 Iraqi Prime Minister Adel Abdul Mahdi said Friday he would submit his resignation to parliament after the government faced nearly two months of deadly protests against the political elite.

The announcement, broadcast on state television, came as Iraq's top Shiite cleric, Grand Ayatollah Ali al-Sistani, said in his Friday sermon that parliament, which put Abdul Mahdi in power, should "reconsider its options.''

"In response to this call, and in order to facilitate it as quickly as possible, I will present to parliament a demand [to accept] my resignation from the leadership of the current government," said the statement, signed by Abdul Mahdi.

Al-Sistani, the 88-year-old spiritual leader of Iraqi Shiites, warned in his sermon of civil war after a deadly day of violence, in which security forces shot dead 40 people in the capital and southern provinces.

The latest deaths brought the number killed since October 1 to more than 400 people, while thousands more have been wounded.

In his sermon, al-Sistani said that parliament should act in Iraq's interest and "avoid seeing the country slip into a vortex of violence, chaos and havoc."

Al-Sistani, who outside of times of crisis maintains distance from politics and is considered a proponent of an independent Iraq, has repeatedly called on protesters to remain peaceful and security forces to refrain from violence.

His past calls on the government to meet protesters' demands have been met with promises and little more.

The grassroots protests against the entire political class and rampant corruption represent the biggest challenge to the Shiite ruling class since the US-led invasion that toppled Saddam Hussein in 2003.

Protesters are mostly unemployed and disenfranchised Shiite youth seeking the departure of those claiming to represent them.

What could be next for Iraq?

Iraqi historian and political expert Hisham al-Hashimi told DW that Abdul Mahdi's resignation will not mean an immediate end to the unrest in Iraq, but it could calm the protests somewhat.

"The situation will ultimately be resolved only if the main demands of the protesters are met," said Hashimi.

Hashimi said these demands include a transitional government, early elections on the basis of an amended election law and the creation of a new election commission.

Iran's influence in Iraq has drawn the ire of protesters across sectarian lines, who have attacked symbols of Iran's clerical leadership and Iran's consulate in Karbala and Najaf.

Al-Sistani's call for a new government — a difficult message for Shiite parties and militias to ignore —  appears to deal a blow to Iran, which has sought to politically maneuver to keep the government in Baghdad in power and backed the security forces' crackdown on protesters.

Iraq expert Hashimi said that Mahdi's resignation announcement means Iran has lost an important ally in Iraq, and called it a "black Friday" for Tehran.

Iraq's "enemies are trying to sow chaos and infighting to return the country to the age of dictatorship ... everyone must work together to thwart that opportunity," al-Sistani said.