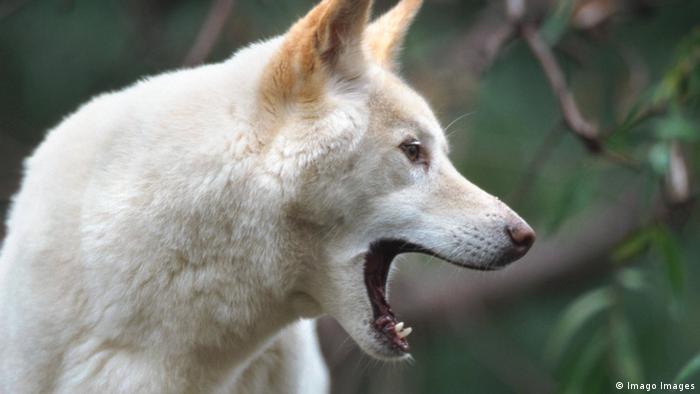 The pale, sandy face of a dingo peers out between the blackened trunks of charred eucalyptus trees. The canid is half of a single pair that lives at the Secret Creek wildlife sanctuary at the foot of Australia's Blue Mountains in New South Wales.

Part of the sanctuary was among the 17 million hectares (42 million acres) of Australian land that were ravaged by fires in late 2019 and early 2020, killing or displacing over 3 billion native vertebrates, according to WWF.

Secret Creek's two dingoes, a female and male, might have perished too, had coal-miner-turned conservationist Trevor Evans not temporarily moved them to a Sydney zoo.

Once the flames died down, Evans brough them home to the sanctuary where they are protected. But across the country, the fires have left Australia's only native canid with less habitat and fewer prey. 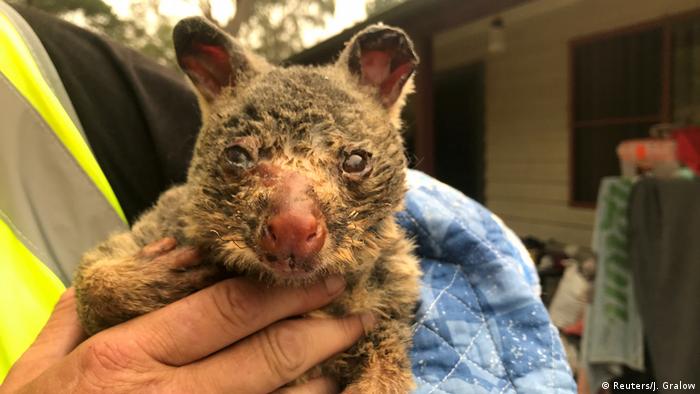 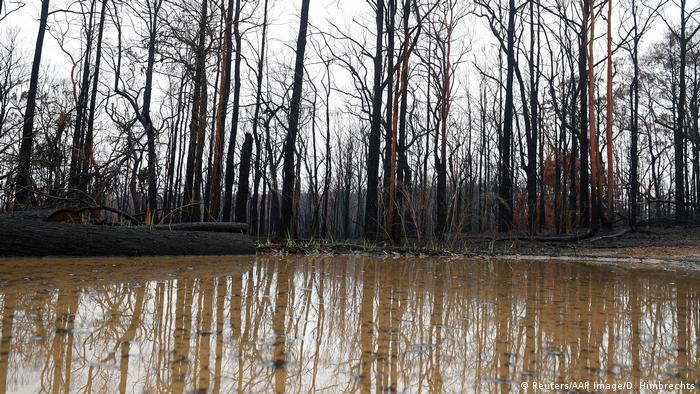 Charred trees in Australia's Blue Mountains. Millions of acres of forest were lost in the fires that swept through the country last summer

The dingo: a farmer's foe

Evans set up the sanctuary 19 years ago, after he lost his job. He had been studying environmental sciences while working at the mine and developed a particular passion for the dingo.

But his love for these oft-maligned predators runs against the grain.

The dingo has long been considered a threat to livestock by farmers, and it is legal in many Australian states to hunt them. The New South Wales government lumps dingoes in with feral domesticated dogs as a "priority pest species" that threatens farm animals and wildlife, and can be killed.

"The dingo is treated terribly in Australia, shot and poisoned," said Evans who hopes Secret Creek Sanctuary can help safeguard its future. "That's why we need to protect some dingoes here, to preserve their DNA."

Dingoes are considered native to Australia. But their history on the continent isn't as old as that of species like the kangaroo, whose ancestors hopped around Australia as early as 20 million years ago.

There is some debate over when the first dingoes arrived, but the oldest known archeological records of their presence in Australia date back more than 3,000 years . They are thought to be descended from domestic dogs introduced from Asia, and over the millennia have adapted to become an integral part of the local ecosystem.

But after English colonization, dingo numbers fell as they clashed with farmers. Today, the biggest threat to their survival is interbreeding with domestic and feral dogs. And their uncertain status as a distinct species complicates their conservation.

The dingo had been listed by the International Union for Conservation of Nature as vulnerable to extinction, but it recently lost its status as a distinct subspecies, and therefore its consevation status too. Dingoes are now classified as "feral domestic dogs." 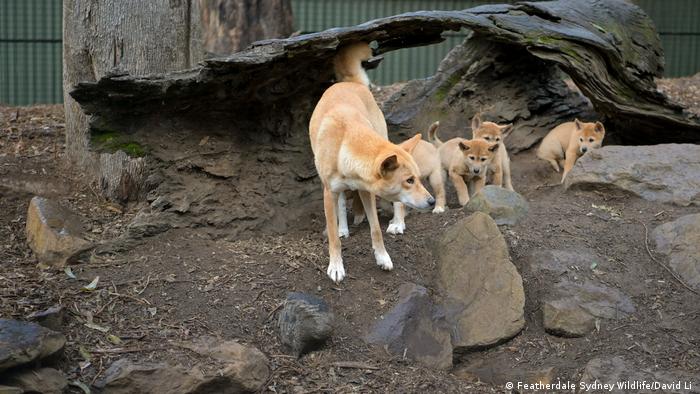 A dingo with its young

They are protected in some states and treated as a pest and invader in others, where state authorities regularly distribute a poisoned bait called 1080 (sodium fluoroacetate) throughout forests to kill them.

When several Australian state governments, including New South Wales and Victoria, announced a new round of aerial baiting in May this year, 24 scientists wrote to the federal environment minister, calling for an end to the practice.

Since then the poison has been dropped in various regions of Australia and across many parts of the Blue Mountains in early September.

"Using 1080 baiting is an indiscriminate form of pest control," said Mike Letnic, a professor at the School of Biological, Earth and Environmental Sciences at the University of New South Wales, and one of the letter's signatories. "It is cruel and may also result in the deaths of non-target animals that may eat the bait."

An animal that eats the bait can suffer from seizures and take days to die, explained Letnic. Some conservationists say shooting is quicker if done properly.

The animals are territorial and will avoid other packs, so Pitcher is running trials to investigate whether distributing dingo urine or playing dingo sounds might deter them. Elsewhere in Australia, some farmers are using donkeys and alpacas to guard sheep from dingoes.

Yet finding ways to protect livestock without killing dingoes may not be enough to protect what many consider a menacing and sinister predator. Conservationists say attitudes must change too.

Due respect for the dingo

Chad Staples, curator at Featherdale Wildlife Park in Sydney, wants people to learn respect for dingoes as the intelligent hunters they are, and understand their value for other Australian ecosystem wildlife.

"Dingoes are important to ecosystem health," Staples said. "There is evidence they can reduce feral cat, rabbit and fox numbers," referring to animals that were brought to Australia from Europe far more recently than the dingo and have played havoc with indigenous wildlife.

But he stressed that people should be wary of them too. Dingoes will usually run from danger, but as large carnivores, they can become aggressive or get too close to campsites, especially if there is food around. In 2018 and 2019, there was a spate of dingo attacks on humans, including small children. 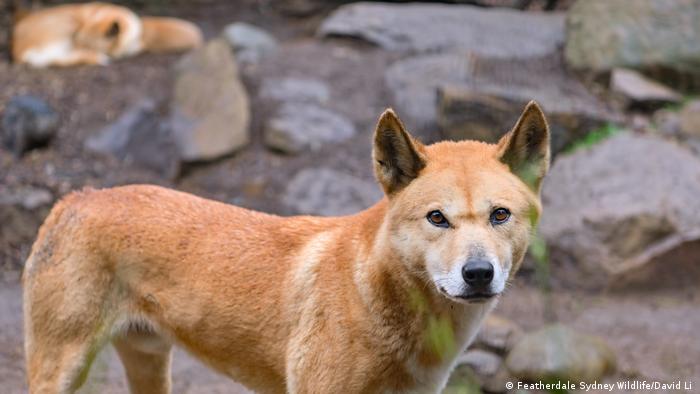 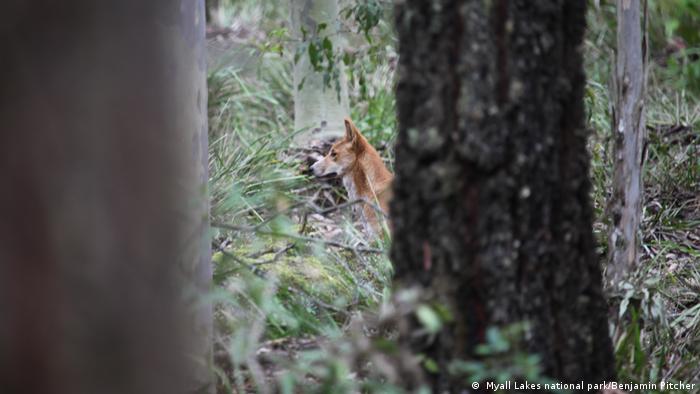 Dingoes are much maligned in Australia, particularly because they are seen as a threat to livestock

One sector of Australian society has a long had a healthy respect for these apex predators; dingoes hold an important place in Indigenous spirituality.

Historically, Aboriginal communities welcomed these wild dogs to their camps as "protectors or guardians," companions and even "bed warmers," according to a study by psychologists at the University of New South Wales, but never domesticated them as pets.

Educating the next generation

Evans recently set up a mentoring program at Secret Creek with local Indigenous elders and environmentalists to teach Indigenous youth about the cultural significance of wild animals and the need to preserve their habitat. He believes connecting with young people can help shape future attitudes to conservation in Australia.

As winter turns to spring in the blackened forest, the Secret Creek pair are safe, at least for now, from fires. Evans hopes they will breed, so their offspring can be released to boost the species' wild population.

But there is still much work to be done to ensure their survival beyond the protection of the sanctuary. "We need to educate the next generation of the worth of these animals," Evans said. "Then they may be safe in the wild again."

The bushfires that have recently ravaged Australia are among the worst natural disasters the country has ever experienced. An Augmented Reality infographic in the article offers an insight into the extent of the damage.

That bear or kangaroo might look cute, but it's a wild animal, not a pet. Wildlife veterinarian Dr Jan Schmidt-Burbach spoke to DW about the need for humans to learn to respect that most basic rule of nature.

The Andean bear faces threats from poachers, farmers and disappearing habitat in the jungles of South America. Two scientists are on a mission to protect them.