Asia Bibi, a Pakistani-Christian woman accused of blasphemy, was released from jail on Wednesday amid violent Islamist protests against her Supreme Court acquittal. But Bibi can reportedly still not leave the country. 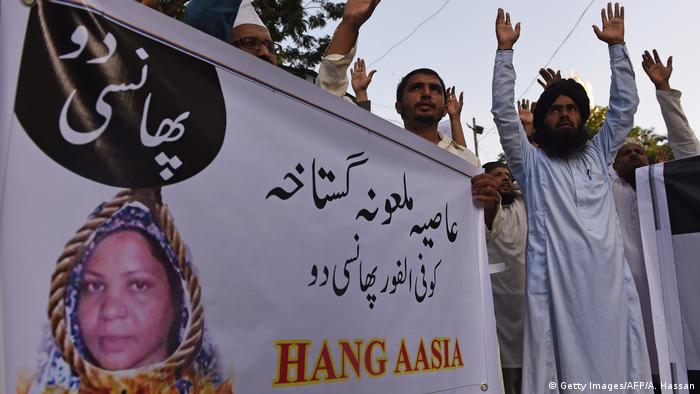 Bibi's lawyer, Saif-ul-Mulook,told the Bild am Sonntag German newspaper that Asia Bibi "would be happy if she could leave for Germany with her family."

Bibi, who was acquitted by Pakistan's Supreme Court on blasphemy charges on October 31, is reportedly still in Pakistan despite her release from jail on Wednesday.

Mulook fled Pakistan to the Netherlands a day after the court's decision.

Bibi was arrested in June 2009, after her neighbors complained she had made derogatory remarks about Islam's Prophet Muhammad. A year later, Bibi was sentenced to death, despite strong opposition from national and international human rights groups.

Despite her acquittal by the Supreme Court, Bibi remained in prison due to Islamist protests, spearheaded by the Tehreek-e-Labbaik (TLP) party.

Blasphemy is punishable by death in Pakistan, where 97 percent of its 180 million inhabitants are Muslims. Rights activists have demanded reforms of the controversial blasphemy laws, which were introduced by the Islamic military dictator General Zia-ul-Haq in the 1980s. Activists say the laws have little to do with blasphemy and are often used to settle petty disputes and personal vendettas.

Several European countries are willing to take Bibi and her family in, but it is unclear when she would be allowed to leave the South Asian country.

What next for Bibi?

Haroon Janjua, DW's correspondent in Islamabad, said Prime Minister Imran Khan's government wants to complete all legal requirements before Bibi, who is reportedly under protective custody, can leave the country.

A review petition against Bibi's acquittal was filed right after the Supreme Court's October 31 verdict. The country's highest court is likely to make a decision on the petition in the next few days.

Experts say it is unlikely that the top court's judges, including the Supreme Court's chief justice, would accept the petition, as it would require a larger bench to hear it.

After violent protests against the suspension of Bibi's death erupted across the country, Khan's government opted to make a deal with Islamists to "avoid bloodshed." The move was heavily criticized by rights groups.

But Khan recently told media that his government would not compromise on legal decisions.

"I want to make it clear that the government stands with the decision of the Supreme Court and there will be no compromise on it," Khan said on Saturday.

"The rule of law depends on following verdicts of the Supreme Court and if you do not follow the top court's decision then law finishes in the country," he added.

Read more: Pakistani minister: Asia Bibi could be barred from leaving the country

Earlier this week, Bibi's attorney told S. Khan, DW's Islamabad correspondent, that he does not think that PM Khan's government has taken any U-turn on the Supreme Court's decision. "I believe that religious hardliners needed a way out, and the authorities gave them that. The conditions of the government-TLP agreement do not amount to the surrender of the state. Having said that, it is a citizen's constitutional right to file a review petition in the Supreme Court."

"Almost all blasphemy cases in Pakistan are fabricated. There are people who misuse blasphemy laws. Even if there is a blasphemy charge against anyone, there should be a fair trial without fear and intimidation," Mulook added.