Asia Bibi, a Christian woman whose conviction and death sentence for blasphemy against Islam was reversed last week, has been released from jail in Pakistan. Local media says she could be on the way out of the country. 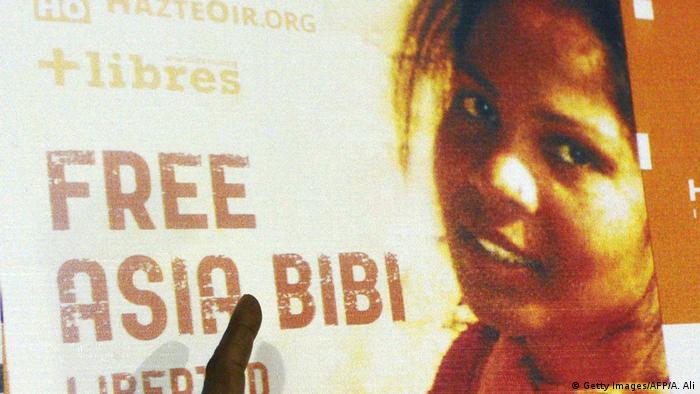 Pakistani Christian woman Asia Bibi, who was acquitted by the Supreme Court last week, has been released from jail, local media reported on Wednesday.

It has also been speculated that Bibi's family had been advised to prepare for an international flight. It is still unclear whether she is still in Pakistan or has left the country.

According to some media reports, she was likely already on the way out of the country. But Mohammad Faisal, a spokesperson for the Foreign Office, told local media on Thursday morning there was "no truth in reports of her [Bibi] leaving the country."

But Antonio Tajani, president of the European Parliament, has confirmed that Bibi was released from prison, saying he is looking forward to meeting her in Europe.

"#AsiaBibi has left the prison and has been transferred to a safe place!," he wrote on Twitter. "I look forward [to] meeting her and her family in the European Parliament as soon as possible."

Blasphemy is a sensitive topic in Pakistan, where 97 percent of its 180 million inhabitants are Muslims. Rights activists have demanded reforms of the controversial blasphemy laws, which were introduced by the Islamic military dictator General Zia-ul-Haq in the 1980s. Activists say the laws have little to do with blasphemy and are often used to settle petty disputes and personal vendettas.

Bibi was arrested in June 2009, after her neighbors complained she had made derogatory remarks about Islam's Prophet Muhammad. A year later, Bibi was sentenced to death despite strong opposition from national and international human rights groups.

In 2014, when the death sentence had been upheld by the Lahore High Court, rights group Amnesty International called the verdict a "grave injustice."

Despite her acquittal by the Supreme Court, Bibi remained in prison due to Islamist protests.

Following the Supreme Court verdict of Bibi's acquittal, the ultraviolent Tehreek-e-Labbaik (TLP) party took to the streets and reduced Pakistan to a standstill for three days before striking a deal with the government. Authorities agreed not to oppose a review petition filed in the Supreme Court to reverse the verdict against Bibi and place her name in an Exit Control List.

"I trust the justice system of Pakistan, I am glad she has been released as per the decision of the court. She deserves to live a safe life. It is sad that her basic right to justice took nine years of her life," Gulalai Ismail, a human rights activist, told DW.

"This should be a lesson for the government to make necessary reforms required so that again no one ends up in prison or becomes victim to mob violence because of false allegations. Nevertheless, her release gives me hope for a better Pakistan."

The TLP warned of a forthcoming response. "The government has retreated from its agreement with us and released Asia Bibi, we will share our future plan of action shortly," TLP spokesperson Ejaz Ashrafi told DW in a telephone interview.

Asia Bibi and the countless victims of blasphemy laws

A Pakistani minister, Shahbaz Bhatti, was assassinated in 2011 for supporting Asia Bibi, a Pakistani-Christian accused of blasphemy. Bhatti's brother told DW he is concerned about the safety of Christians in Pakistan. (07.11.2018)

Hard-line Islamists have been baying for blood after the Supreme Court overturned a woman's blasphemy conviction. Thousands of protesters had shut down major transport throughout the country. (03.11.2018)