The family of slain Maltese reporter Daphne Caruana Galizia has handed over two of her laptops to German authorities. The family fears confidential sources could be compromised if Maltese officials get hold of the data. 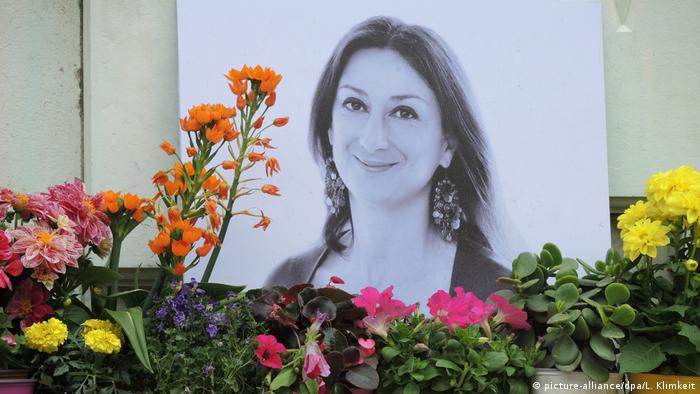 Authorities said they had been handed the equipment around a month ago by representatives from Caruana Galizia's family.

The family has refused to grant Maltese authorities access to the data out of fear the late journalist's sources could be compromised.

Corinne Vella said her late sister would not have wanted her laptops to be given to the local authorities. "Daphne would always hide her laptop before going out. It was about protecting her sources," she said.

"And she died protecting her sources. She knew that whatever information the police got hold of would go straight to the same people in government she was investigating."

However, it remained unclear why family instead turned to German federal authorities to protect Galizia's sensitive data. The Maltese government would be allowed to officially request access or copies of the digital material, Oliver Kuhn, a spokesman for its Federal Prosecutors' Office, said.

Caruana Galizia was killed last October after a bomb was planted under her car. The journalist had written a popular investigative blog that accused some of Malta's most prominent figures — right up to Prime Minister Joseph Muscat — of graft.

Maltese detectives investigating Caruana Galizia's death have long been trying to obtain the late reporter's laptops, against the wishes of her family.

The equipment is also at the center of a legal dispute with one of the murder suspects.

Alfred Degiorgio filed a constitutional application over the family's refusal to grant local investigators access to the equipment. Degiorgio, along with his brother George and a third man by the name of Vince Muscat (no relation to Prime Minister Joseph Muscat), stand accused of planting the car bomb.

Other German interests at play

Maltese media reported that German authorities had in fact paid millions of euros for access to the laptops, as part of their own investigation to identify and prosecute German tax cheats.

This wouldn't be the first time German police have paid for data on suspected tax dodgers. Last year, German federal police admitted to paying some 5 million euros ($5.7 million) to purchase the Panama Papers documents as part of its bid to track down German-based tax cheats.

The EU said Russia's invasion of Ukraine had highlighted the "inherent risk" of granting EU citizenship to investors. Malta has two months to respond to an official notice over the scheme or face litigation.

The prime minister of Malta says his party has been victorious in the country's general election, citing preliminary polls. Final results are still expected.