Kuwait sticks to the past as it prepares for the future

The new emir of Kuwait, Sheikh Nawaf al-Ahmad al-Sabah, is unlikely to change the nation's "positive neutrality" policy. But he could lay the groundwork for his successor to herald a new era in the Middle East. The death of Kuwait's Emir Sheikh Sabah al-Ahmad al-Sabahhas threatened to upend the delicate balancing act he maintained across the nearly 15 years of his reign.

Under al-Sabah, who died at the age of 91, Kuwait maneuvered through one of the most tumultuous decades in the Middle East, including the latter half of the Iraq War, the rise of "Islamic State" and a bitter rivalry between Saudi Arabia and Iran.

However, as a result of coronavirus restrictions, the only Arab leader at his funeral was Qatar's Emir Tamim bin Hamam al-Thani, whose country has faced regional isolation from the likes of Saudi Arabia and the United Arab Emirates due to its involvement with Iran.

For many, Sheikh Sabah was a positive force for the region.

"He will be long remembered by all who work for regional stability, understanding between nations and between faiths, and for the humanitarian cause," according to a statement from the UK's Queen Elizabeth II.

In 2017, he ensured Kuwait was the chief mediator when Saudi Arabia and itsArab allies sought to isolate Qatar diplomatically. He further established Kuwait as a neutral mediator in armed conflicts by hosting UN-backed peace efforts for the Yemeni conflict.

"The agenda of Kuwait is peace," UN Secretary-General Antonio Guterres said in 2017.

Given his regional and international status, al-Sabah's successor, Emir Sheikh Nawaf al-Ahmad al-Sabah, has big shoes to fill — and he knows it.

"Our dear nation today faces difficult situations and dangerous challenges that can only be overcome … by unifying ranks and working hard together," Sheikh Nawaf told the Kuwaiti National Assembly. 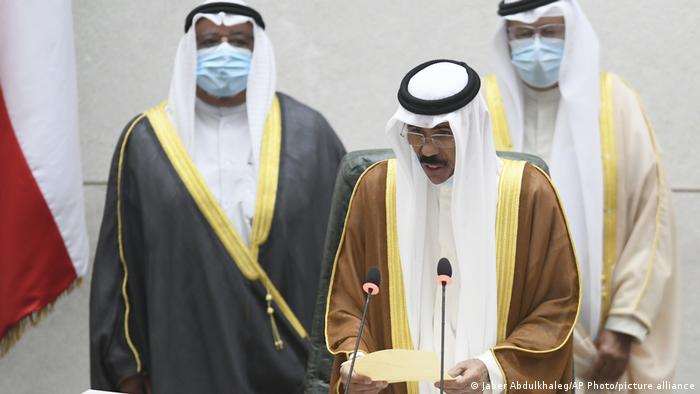 But experts largely agree that Nawaf, who has held several ministerial portfolios, including interior and defense, lacks the experience to alter the country's "positive neutrality," which has long steered its foreign policy.

"The late Sheikh Sabah, whether as Minister of Foreign Affairs or Emir of the country, committed himself to avoiding interference in the internal affairs of countries while playing the roles of mediation and positive neutrality," Ghanim al-Najjar, political science professor at Kuwait University, told DW Arabic.

Sheikh Sabah's political and diplomatic efforts enjoyed popular support, al-Najjar added, noting that there is little desire for Sheikh Nawaf to change course even if he wanted to.

New era on the horizon

"It has not happened in Kuwait's modern history that a crown prince was imposed without consultations and without respect for the country's constitution," al-Najjar said. "There are rarely such sudden developments in the country regarding the transfer of power."

But al-Najjar noted that the next emir of Kuwait would likely come from a younger generation and, as such, would likely have the mandate to steer the country into a new era, which could include normalizing relations with Israel.

The US — Kuwait's largest security guarantor and a longtime ally— has made no secret of its plans to push Arab states towards establishing relations with Israel. Last month, the UAE and Bahrain gave in to American pressure and signed a deal with Israel to expand diplomatic relations along with commercial and scientific links.

After honoring the late Sheikh Sabah with an award last month, US President Donald Trump told reporters that Kuwait was "so excited that we've signed the first two countries and I think they'll end up fairly quickly being a part of it."