Kurds in Germany have again marched in protest over the "Islamic State" offensive on the Syrian town of Kobani. Fresh US-led airstrikes continue to hamper the militants' drive to seize the city on the border with Turkey. 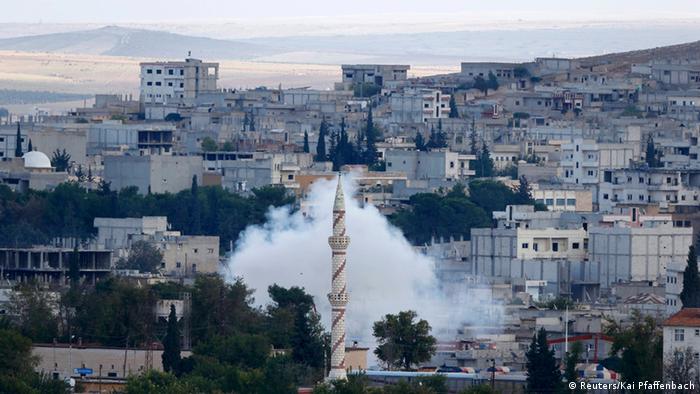 Hundreds of Kurds gathered in the northwestern German city of Bielefeld on Saturday to protest against the brutality of the "Islamic State" ("IS") terrorist group and its assault on Kobani, also known as Ayn Arab, in northern Syria.

More than 1,700 Kurds turned out in Bielefeld, while similar rallies took place in Berlin, Frankfurt, Lübeck and Munich.

Participants waved flags and held banners with slogans warning of a massacre if the "IS" militants succeeded in seizing the town.

"IS" has been trying to capture Kobani since mid-September in a bid to consolidate a 95-kilometer (60 mile) stretch of land they control in Syria along the Turkish border.

A police spokesperson at the protest said two banners displaying forbidden symbols were confiscated, but otherwise the demonstration took place peacefully and without incident.

Last Saturday, more than 20,000 Kurds protested peacefully in the Rhine river city of Düsseldorf. Around 1 million Kurds live in Germany, the result of worker recruitment in the 1960s.

A week previously, a similar protest in Hamburg culminated in a violent clash between Kurdish demonstrators and several hundred "IS" supporters.

Germany formally outlawed "IS" on September 12, making it a crime to support the group. But German Justice Minister Heiko Maas last week said there were more than 200 suspected "IS" sympathizers under investigation in Germany.

Authorities estimate that some 400 "IS" supporters have left Germany in recent months to join fighters in Iraq and Syria.

This week, the US-led coalition targeting "IS" stepped up airstrikes around Kobani in a bid to support Kurdish forces trying to push back the militants.

US Central Command said further strikes carried out on Saturday hit "IS" targets in Kobani at least six times, after militants unleashed a barrage of heavy shelling on the town.

"Airstrikes are not enough...It's reduced ISIS, but it's not enough to defeat them," Nassan said, referring to the group by its former name.

Meanwhile the Britain-based Syrian Observatory for Human Rights, which relies on a network of activists in Syria, said 10 civilians had been killed in two separate US-led airstrikes on "IS."

The report has not been independently verified, and US Central Command said there was no evidence to corroborate claims of civilian casualties. Spokesman Colonel Patrick Ryder told Reuters "every precaution is taken to ensure civilians are not harmed… we have a process to investigate each allegation."

Suspected supporters of 'IS' arrested in Germany

Police in Germany have arrested two suspected supporters of "Islamic State," which has made significant territorial gains in Iraq and Syria. The pair is alleged to have sent clothing and money to the militants. (18.10.2014)

Justice Minister Heiko Maas has told Spiegel that more than 200 people are under investigation as suspected members or supporters of the self-proclaimed "Islamic State." Germany outlawed the group altogether last month. (11.10.2014)

Thousands of protesters, many of them Kurdish, have gathered in Düsseldorf, calling for a stronger response to the attack on Kobani. Interior Minister Thomas de Maiziere urged protesters to remain peaceful. (11.10.2014)