Opposition lawmakers opened tear gas canisters inside parliament's chamber to block a border deal with Montenegro. But parliament pushed through, paving the way for visa-free travel in the Schengen for Kosovar nationals. 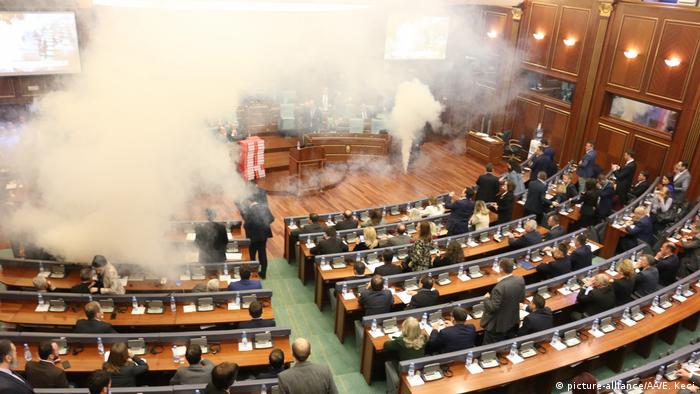 Lawmakers were forced to evacuate the hall just as the vote was due to begin Wednesday morning. After they returned in the early afternoon, tear gas was set off once again, delaying the vote for a second time. Two government ministers were injured in the attack.

Police wearing gas masks entered the hall to search the benches occupied by MPs from the opposition Vetevendosje (Self-Determination) party.

Despite the two incidents, Parliamentary Speaker Kadri Veseli insisted that "today the trauma of the Montenegro border demarcation will end. The vote will be held today." The border deal was later passed 80 to 11, reaching the required two-thirds vote for approval. 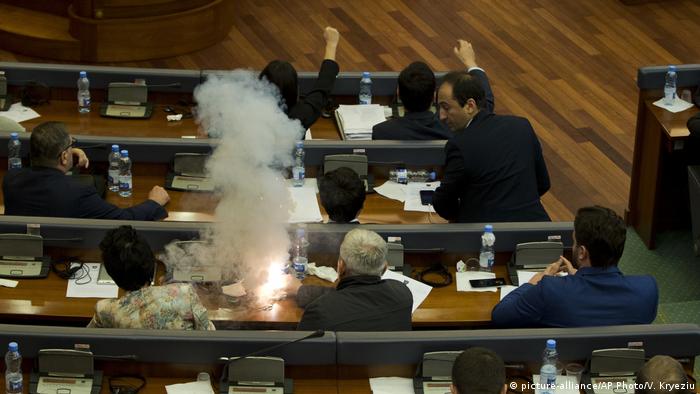 The Self-Determination party has used tear gas and similar tactics to disrupt votes in the past.

A ratification of the border deal would see Kosovo added to the list of the European Union's visa-free travel list.

The nationalist opposition, however, claims that the border deal would cede some 8,200 hectares (20,000 acres) of territory to Montenegro.

The EU's ambassador to Pristina, Nataliya Apostolova, tweeted that she was "appalled by tear gas release in assembly" and "shocked that members of a parliament in Europe are resorting to dangerous tactics pulling Kosovo backwards."

The EU's commissioner for enlargement, Johannes Hahn, also took to Twitter to condemn the opposition's actions. "Such behavior has no place in a democracy," Hahn tweeted. "On this important day, Kosovo leaders must assume their responsibilities and vote for the demarcation agreement."

US Ambassador to Kosovo Greg Delawie tweeted on Wednesday: "Violence as a political tool has no place in Kosovo. I urge MPs to reconvene and finish the vote today."

The EU and US remain the country's biggest financial and political supporters, despite challenges to its integration into the European bloc.

The 120-seat parliament in Pristina is expected to ratify a 2015 border deal with Montenegro once proceedings are eventually completed.

The EU made a settlement of the border a precondition for Kosovo to receive visa-free travel rights within the Schengen zone.

The Kosovo government also hopes recognizing the border deal will ultimately set the country on its way to eventually becoming an EU member. On Wednesday, Kosovo's Prime Minister Ramush Haradinaj called the vote "the most important matter for the country." The government and international experts have disputed the claim.

Kosovo, which split from Serbia in 2008 after a bitter war at the end of the 1990s, is still the only western Balkan country not included on the EU's visa-free list. Its regional neighbors — Serbia, Albania, Montenegro, Macedonia and Bosnia — all gained visa-free access to the bloc's Schengen area in 2010.

For weeks, digital clocks in Europe have been lagging behind. The unexpected source of the problem: Kosovo and Serbia, whose power grid operators can't find common ground. (07.03.2018)