Kosovo′s self-determination activists clash with police | Europe| News and current affairs from around the continent | DW | 17.01.2012

There were renewed clashes between self-determination activists and police in northern Kosovo this weekend. The political movement for self-detemination in Kosovo is gaining ground, but its principles remain unclear. 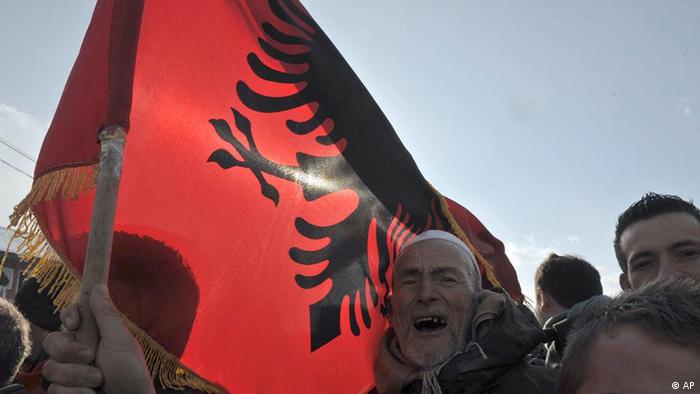 Over 50 people were injured and almost 150 arrested this weekend after clashes between the Vetevendosje (self-determination) movement and security forces in northern Kosovo. Several hundred Vetevendosje activists had tried in vain to block two control posts on the border with Serbia. For the first time, the political movement was also supported by activists from the neighboring states of Albania and Macedonia.

It was the biggest display of Kosovar security forces since Kosovo's independence four years ago. Police used tear gas, water cannon, pepper spray and batons against the supporters of Vetevendosje. The protesters were attempting to block two control posts on the border with Serbia and prevent Serbian imports into Kosovo. 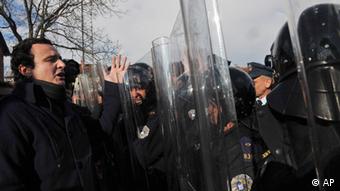 The movement is the third-largest parliamentary party in Kosovo. It opposes foreign involvement in all internal affairs in the country and campaigns for the sovereignty of the people of Kosovo.

Political analyst Halil Matoshi said the movement also had other objectives: "Their main goal is to put pressure on the government to act, not only against imports from Serbia, but also against corruption, mismanagement and organized crime in Kosovo," he told Deutsche Welle.

Popular among nationalists and the unemployed

Vetevendosje pushed through a resolution in Kosovo's parliament last December, demanding free trade between the two countries. The latest demonstrators were trying to draw attention to the fact that Serbia has continued to hold up imports from Kosovo. Matoshi believes, however, that there are many other reasons for the anti-government protests.

"This government has lost support because of corruption, taking part in organized crime or working together with organized criminals, as well as through personal enrichment and the abuse of public funds," Matoshi explained. "These are some of the reasons why the people of Kosovo have been lending more support to the Vetevendosje movement."

The Vetevendosje movement is particularly popular among the Facebook generation, but also among the more than 40 percent unemployed in the country, and among nationalists. With populist, flowery language they are trying to use the poor economic situation for their own political interests.

One of the subjects exploited by the movement in their criticism of the government is the fact that only 86 countries have so far recognized Kosovo as an independent state. The party campaigns for self-determination for Kosovo's people. They also want to increase Kosovo's international presence. And they want to hold a referendum on union with Albania.

According to recent polls, 80 percent of Kosovo-Albanians, 70 percent of Albanians in Macedonia and 55 percent of the citizens of Albania, all expressed a desire for national unity for all Albanians. However, that is more of a romantic wish than a realistic prospect, according to Matoshi.

"The influence of Vetevendosje would be much greater if the party were to forego calls for 'national unity' or for changes to the national symbols of Kosovo. The people of Kosovo are more interested in social justice, in the fight against corruption and in establishing a constitutional democracy. The Vetevendosje movement is trying to profit from a historic desire of the Albanian people. But that idea belongs to the last century," Matoshi says. 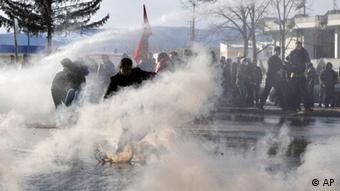 The number of people who took part in the blockade last weekend was in fact far fewer than had been expected. Only a few buses carried protesters from Albania and Macedonia. There are a number of factors at play: Kosovo, Albania and Macedonia all called for their citizens not to take part in any protest action, the weather was poor, and some hope that the dialog between Serbia and Kosovo could still yield results. In spite of this, the Vetevendosje movement has announced further protests for the end of January.

The Serbian government has warned that such protests represent an exercise for possible action possible action against Serbs in Kosovo. But Matoshi doesn't believe this to be the case.

"I absolutely don't believe that these protests could turn against the Serbs. That can't happen, because the movement sees the Serbs as equal citizens in Kosovo. The Vetevendosje supporters are protesting against the dialog with Serbia and against the hostility of the Belgrade government towards Kosovo. They are not aimed at the Kosovo-Serbs."

Serbian President Boris Tadic on Saturday confirmed that a deal has been struck to defuse a Kosovo border dispute. Belgrade had been under intense pressure ahead of a summit to give Serbia official EU candidate status. (03.12.2011)

Tension near the border between Serbia and northern Kosovo is high. Serb protesters have used small firearms to injure two German NATO peacekeepers attempting to remove roadblocks to the border. (28.11.2011)