The North Korean leader didn't rule out the possibility of entering into dialogue with Washington but said his country should be more prepared to have an adversarial relationship with the Joe Biden administration. 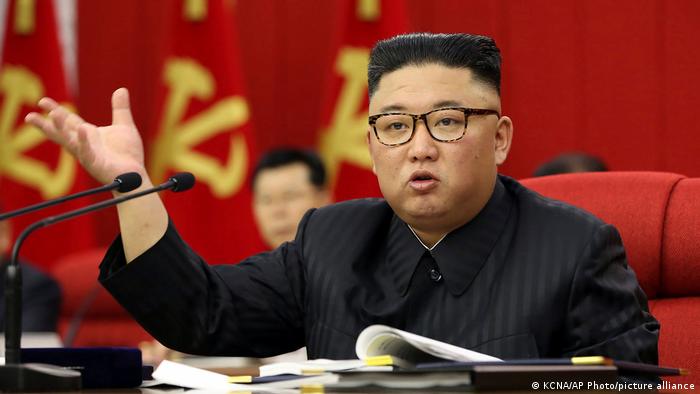 Kim Jong Un said North Korea should be prepared for "confrontation" with the United States, state media reported on Friday.

At a meeting of the Central Committee of the ruling Workers' Party of Korea on Thursday, Kim outlined his strategy for relations with the White House, bearing in mind the "policy tendency of the newly emerged US administration," the Korean Central News Agency (KCNA) said.

Ready for all scenarios

Kim "stressed the need to get prepared for both dialogue and confrontation," but, "especially to get fully prepared for confrontation in order to protect the dignity of our state" and reliably ensure a "peaceful environment," KCNA reported.

The North Korean leader "called for sharply and promptly reacting, to and coping with, the fast-changing situation, and concentrating efforts on taking stable control of the situation on the Korean peninsula", the agency said.

Pyongyang had already accused Biden of pursuing a "hostile policy" and saying it was a "big blunder" for the Democrat to say he would deal with the threat posed by the North Korean nuclear program "through diplomacy as well as stern deterrence."

During his presidential tenure, Biden's predecessor, Donald Trump, made headlines with a series of face-to-face meetings with Kim.

But the new US president says he is not interested in meeting the North Korean leader unless the terms of a sitdown change dramatically.

Why is North Korea 'cracking down' on 'foreign influence'?

In North Korea, a new "thought law" gives authorities the power to crack down on what they consider foreign haircuts, fashion and slang, while adults caught with CDs or USBs from abroad are being executed.

Kim Jong Un's sister slams the US and South Korea

Kim Yo Jong, the sister of the North Korean dictator, lashed out at Washington as top US diplomatic and military representatives are set to visit Seoul.