The United States and Russia's head diplomats met in Rome Friday to work towards ending fighting in Aleppo. The two sides will continue discussing the conflict in Aleppo on Wednesday. 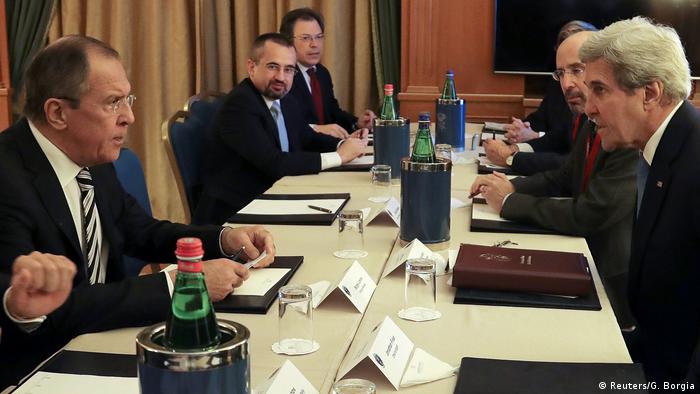 United States Secretary of State John Kerry has met with Russian Foreign Minister Sergey Lavrov in Rome in a renewed bid to ease the fighting in the besieged Syrian city of Aleppo. Pope Francis also attended the meeting.

"We have exchanged a set of ideas, which there will be a meeting on early next week in Geneva, and we have to wait and see whether those ideas have any legs to them," said Kerry.

"The time is ripe for compromise," said Lavrov.

The United States has accused Russia of war crimes and crimes against humanity in the ongoing civil war in Syria, which has lasted since 2011. Russia blamed the US and UN for the current situation in Syria.

The UN warned eastern Aleppo could become a "giant graveyard" if the violence continues. Previous international efforts for a truce have broken down.

Russia, which supports Syrian President Bashar al-Assad, has been in talks with opposing forces to ease the tough conditions in Aleppo. An opposition official claimed Friday that Russia was procrastinating.

Kerry said he will check the progress of peace talks with Lavrov when the two meet again on the sidelines of a European security conference in Hamburg, Germany, on Wednesday.

More than 300,000 have been killed in the civil war, and millions have been displaced since the conflict began.

Follow the Hashtag: #StandWithAleppo - War through the eyes of a child

Russia announces Syria talks with US, regional powers in Lausanne

Russia's Foreign Ministry has said bilateral talks with the US on Syria will take place in Lausanne at the weekend. Washington has announced a second round of talks on Sunday in London to discuss the conflict. (12.10.2016)

Russian Foreign Minister Sergey Lavrov has described his country’s airstrikes in Syria as 'limited.' The comments came during a meeting with US Secretary of State John Kerry. (18.11.2016)

The US Secretary of State has demanded that a war crimes investigation be launched into Russian and Syrian government attacks on hospitals in Aleppo. He said the attacks were deliberate attempts to "terrorize" civilians. (07.10.2016)