Kashmiris face uncertain future as violence escalates | Asia| An in-depth look at news from across the continent | DW | 25.02.2019

Violence has increased in Kashmir following a terrorist strike that killed more than 40 Indian troops. The Indian army has scaled up operations in the region, and locals are increasingly worried amid rumors of war. 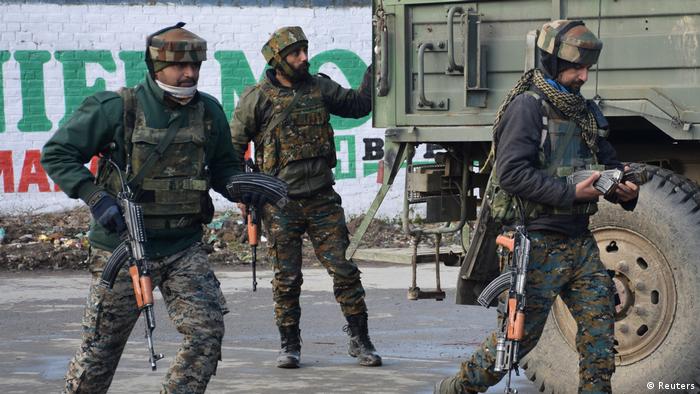 On Sunday afternoon, Rubeena Rashid, 35, was sitting at home with her two daughters in the Turigam village of Kulgam in India-administered Kashmir, when the rattle of gunfire resounded through the air.

"After the recent bombing, whenever there is gunfire or any other noise, we get scared," she said. "When we heard the first gunshots, we ran to our neighbor's house. We are afraid and unsure of what's going to happen."

The gunfight on Sunday confirmed her fears. At least six people were killed, including Aman Thakur, an officer of the Indian army, along with five insurgents.

Tensions have increased in Kashmir's border areas after  terrorists attacked an Indian military convoy on a highway in south Kashmir's Pulwama district on February 14. In the incident, a suicide bomber rammed an explosive-laden car into a military bus, killing at least 40 Indian paramilitary troops.

The strike was one of the largest attacks in Kashmir's three-decade history of violence. Members of the insurgent group Jaish-e-Muhammad claimed responsibility for the attack.

The Indian government, which feels that Islamabad is sheltering insurgents, has warned Pakistan of consequences. Pakistan has also threatened to respond to any military attack, adding to fears that the current violence may lead to a full-blown war. 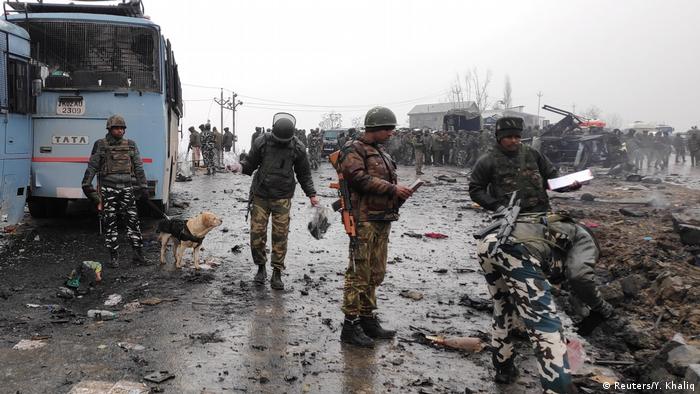 In the aftermath of the Pulwama attack, Indian authorities have launched a massive crackdown against separatist leaders in the region, who are demanding either autonomy for Kashmir or the region's inclusion into Pakistan. According to the police, more than 200 separatists have been arrested in the last three days.

"I fail to understand such an arbitrary move," Mehbooba Mufti, the former chief minister of Jammu and Kashmir, told DW. "Under what legal grounds are the arrests justified?" she said, adding that the Indian government was trying to quell public anger, but since many separatist leaders have been killed in the past, the step would be counterproductive.

Officials have also withdrawn security measures for prominent Kashmiri separatist leaders. The move has been criticized over fears it could "trigger law and order problems" if any one of them is attacked. Separatist parties in the region enjoy a lot of public support.

Abdul Gani Bhat, a senior leader of the separatist party, Muslim Conference, told DW that Pakistan and India needed to find a solution to the conflict.

"Peace should be given a chance, and the ceasefire should be followed," said Bhat, whose security was recently withdrawn.

"India and Pakistan can never afford a war. Taking dialogue forward is in the interest of the two countries. They should proceed with realism, foresight, and accommodation. If this happens, the clouds of panic will disappear," he said

Separatist leader Mirwaiz Umar Farooq also said that the Indian authorities were trying to divert attention from Kashmir's political problem. "We will continue our struggle despite their [the Indian government's] oppressive measures," he told DW.

Meanwhile, the Indian government has deployed 10,000 additional forces to the region, where more than 600,000 soldiers are already stationed. Police have also received orders to stay prepared. "We have been asked to remain prepared for any situation," said a senior police officer on condition of anonymity.

The governor of the state of Jammu and Kashmir, Satya Pal Malik, said that added security measures were being put in place for India's general election in April. He also appealed for people to remain calm.

But concern has been noticeable among residents since the government issued several advisories asking its departments to supply grain and ordered the police to remain alert for possible disruptions in law and order. Hospitals were also advised to stock up on medicines and surgical equipment in case of an emergency.

Locals flooded markets, gas stations and pharmacies to hoard supplies. "There are rumors that something is going to happen in the coming days," said 50-year-old shopkeeper Yaqoob Najar.

"The way the two countries [India and Pakistan] are at loggerheads, a military escalation on the border would not surprise us. We are just caught in this bloody war where everything is uncertain," he said.

"There is a lot of tension. We fear more violence and a military backlash," Faheema, a resident of the area, told DW. A family member of hers was killed in a gunfight on February 18.

For now, peace seems to be a long way off. According to Vijay Kumar, an adviser to the region's governor, "continuous action" against militants is the "duty of government."

Rahul Bedi, a security analyst based in New Delhi, told DW that violence could increase. "This sort of activity is going to accelerate, despite it being winter when the activity of militants would normally be low," he said, adding that he feared an escalation. "After Pulwama, there have been two major encounters. I feel militancy might see a spike," he said.

Hameeda Nayeem, who heads the Kashmir Centre for Social and Development Studies, told DW that news channels in the area were creating a kind of "war hysteria."

The analyst added that the government under Prime Minister Narendra Modi's right-wing Bharatiya Janata Party (BJP) was using the deaths of soldiers for electoral purposes. Mass arrests and use of force would only lead to more militancy, she concluded.